Egypt to expand Russia cooperation after fall out with US

Egypt will be expanding cooperation with Russia following a diplomatic fall out with the United States after President Mohamed Morsi’s ouster, Foreign Minister Nabil Fahmy said on Saturday.

Late October, military intelligence chief Viackeslav Kondraskou visited Cairo as well, The unconcealed purpose for the visit was to discuss with senior Egyptian security officials, including Defense Minister Abdel Fattah al-Sisi and Chief of Staff Sedki Sobhi, the military and security cooperation between the two countries.

Ties between Washington and strategic ally Cairo have deteriorated since Morsi’s overthrow by the military. On October 9, the United States froze part of its $1.5 billion annual aid pending progress on democracy and human rights, following the crackdown on Morsi supporters which left more than 1,000 people dead. 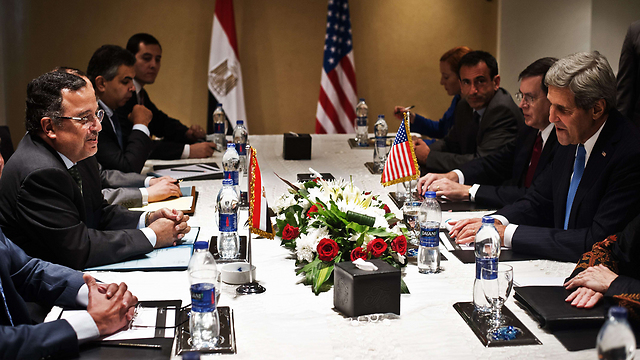 During his visit, the first since Morsi’s overthrow by the military in July, the Secretary of State said the United States is committed to working with the Egyptian government.

He also said he wanted to express to the Egyptian people “as clearly and as forcefully as I can in no uncertain terms, that the United States is a friend of the people of Egypt, of the country of Egypt, and we are a partner.”

But Fahmy said that Egypt is taking a more “independent” approach and broadening its choices.

“Independence is having choices. So the objective of this foreign policy is to provide Egypt with choices, more choices. So I'm not going to substitute. I'm going to add,” he was quoted as saying in an interview with AFP.

“I see this as a beginning of a new phase,” he said.

Egypt had close ties with Russia until several years before president Anwar Sadat made peace with Israel in 1979, leading to $1.3 billion in yearly US military aid.