More details are emerging in the affair of the 1,406 pieces of stolen art found last week in a Munich apartment.

A document published Sunday by the German paper Bild proved that more than 200 of the pieces in the collection, that are worth nearly a billion dollars, were sold in 1940 to an art dealer named Hildebrand Gurlitt by Joseph Goebbels – Hitler's propaganda minister – for only 4,000 Swiss Francs.

According to the report, which was quoted in the British Telegraph, the German Finance Ministry is holding several additional agreements which document the purchase and transfer of the art works between Goebbels and Gurlitt.

Goebbels hired Gurlitt to sell "degenerate" art pieces abroad to raise funds for the Third Reich. Gurlitt was simultaneously buying works of art from desperate Jewish merchants. After the war, he convinced the Americans that his grandmother was Jewish and that he had been pursued by the Nazis, in a bid to enter the United States. He continued working as an arts dealer until his death in a car accident in 1956. 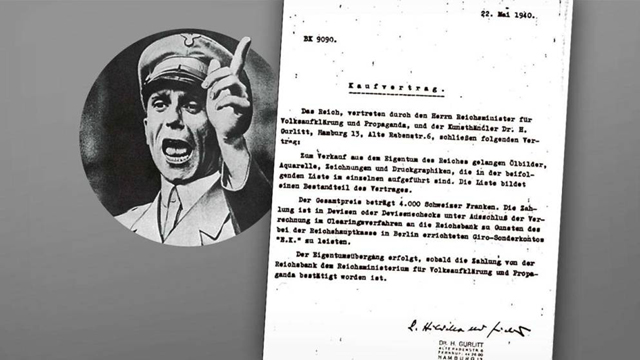 The revelation of the collection's existence – which Gurlitt claimed had burned down in a fire – provoked international outrage, as many around the world demanded a detailed report of the find. The outrage was stoked by the admission of the German government that they had hid the collection for more than two years. The day after the revelation, the representative of the committee which deals with the recovery of Jewish property from Germany demanded the pieces be returned to their Jewish owners.

The collection was discovered two and a half years ago in a Munich apartment that belonged to Gurlitt's reclusive son, 80-year-old Cornelius. The German authorities suspected Cornelius of tax evasion, and a search of his home turned up thousands of works of art which had been plundered by Nazis throughout Europe. The collection included pieces by Pablo Picasso, Pierre-Auguste Renoir, Marc Chagall, Henri Matisse, and more. Cornelius reached into his massive collection and sold a piece once in a while to finance his living.

Cornelius Gurlitt disappeared after the collection was discovered in his home, and German authorities claim they have no information on his whereabouts. Despite this, two French journalists claim to have located him Friday at a shopping center near the apartment that held the collection. According to the report in the Telegraph, the journalists described Cornelius as "angry and fearful, yet elegantly dressed."

On Saturday, German authorities confiscated 22 paintings from the home of Cornelius' brother-in-law, Nikolaus Fraessle, near Stuttgart. According to the report in Bild, Fraessle called the police to report he had the painting in his possession.