Conservative leaders, fond of finger-pointing at France in recent years, lavished praise on Paris Sunday for blocking an agreement between Western powers and Iran over Tehran's nuclear program.

"France had the courage to prevent a bad nuclear agreement with Iran," McCain said, after the weekend announcement of the failed agreement with the United States, China, Russia, Britain, France and Germany, known as the P5+1, exemplifying the prevalent attitude towards the French in recent days. 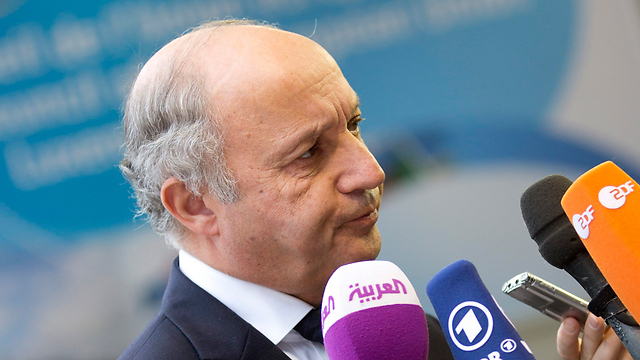 French Foreign Minister Laurent Fabius (Photo: AP)
Channel 2 News reported Sunday that Meyer Habib, a French member of parliament, telephoned French Foreign Minister Laurent Fabius while talks were still taking place to warn him that he believes that Prime Minister Benjamin Netanyahu would order an attack on Iran’s nuclear facilities if western powers did not stiffen their conditions for relieving sanctions. “I know (Netanyahu)… If you don’t toughen your positions, Netanyahu will attack Iran,” Habib reportedly told Fabius. “I know this. I know him. You have to toughen your positions in order to prevent war," he reportedly added. During three days of intense negotiations in Geneva, France repeatedly voiced concerns over various points in a possible deal and its lack of guarantees, a position that had Iran calling it a negotiations spoilsport.

On Monday Fabius said he was hopeful a deal could be reached, although Tehran still had to make an effort on a few points. "We are not far from an agreement with the Iranians, but we are not there yet," Laurent Fabius told Europe 1 radio.

"Thank God for France and thank God for push back," said hawkish Senor Lindsey Graham on CNN's State of the Union program. "The French are becoming very good leaders in the Mideast," Graham said, suggesting he would be in favor of more sanctions against Iran.

"My fear is that we're going to wind up creating a North Korea-type situation in the Mideast, where we negotiate with Iran and one day you wake up...and you're going to have a nuclear Iran," Graham added.

Geneva nuclear talks (Photo: AP)
Immediately before news broke that the talks were expected to end without a deal, a Western diplomat close to the negotiations said the French were trying to upstage the other powers.

"The Americans, the EU and the Iranians have been working intensively together for months on this proposal, and this is nothing more than an attempt by Fabius to insert himself into relevance late in the negotiations," the diplomat told Reuters, speaking on condition of anonymity.

During negotiations, Fabius said that "I cannot say there is any certainty that we can conclude" the talks, noting that France could not accept a "sucker's deal" and that Israel's "concerns" need to be taken into consideration.

'The will of Zionist regime'

The comments, as well as his overall hard-line position towards Iran, prompted two senior Iranian MPs to accuse Fabius of defending Israel.

Hossein Naqavi Hosseini, spokesman of the parliamentary foreign affairs committee, said "the behavior of the French representative in the nuclear talks shows that France is trying to blackmail" Iran.

"While the French people want better ties between Tehran and Paris, unfortunately the French government prefers the will of Zionist regime," said Naqavi Hosseini.

Esmaeel Kosari, a fellow conservative and member of the committee, expressed regret that Fabius's comments "express the positions of the Zionist (Israeli) regime, which prompts us to eye the talks with pessimism."

State news agency IRNA accused Fabius of "hindering" a deal between the P5+1 and Iran.

The English-language Tehran Times said, "France ruined its image in Geneva." According to the government-sponsored paper, Iranian businessmen have decided to "review their relations" with French coutnerparts.

Iran's largest business daily, Donya-e Eqtesad, predicted future fallout for France's efforts, quoting economist Moussa Ghaninejad, "The normalization of relations with the West will happen sooner or later, and France sabotaging the negotiations will certainly come back to haunt it then."

Israel's relations with France have been marred by occasional hiccups. Just a few weeks ago the French president's upcoming visit to Israel stirred a diplomatic firestorm when Knesset Speaker Yuli Edelstein chose to boycott the visit after Francois Hollande decided not to appear before the Knesset, Yedioth Ahronoth reported.

Hollande is expected to arrive in Israel in late November for a three-day state visit.

AFP, Reuters and the Associated Press