After his acquittal from charges of fraud and breach of trust last week, MK Avigdor Lieberman's return to the post of foreign minister has been given the green light. On Monday evening, Lieberman was sworn in to the role he was forced to resign due to the legal process against him.

Meretz Chairwoman MK Zahava Gal-On said before the swearing in ceremony that "appointing Lieberman as foreign minister is like planting an explosive device in the peace process."

"Today that Israel intends to promote the peace process with the Palestinians is the time to let him into the Foreign Ministry? What Exactly is the Knesset signaling by approving the appointment?," Gal-On said. 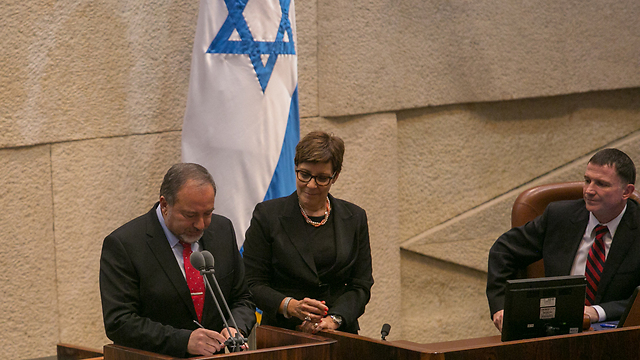 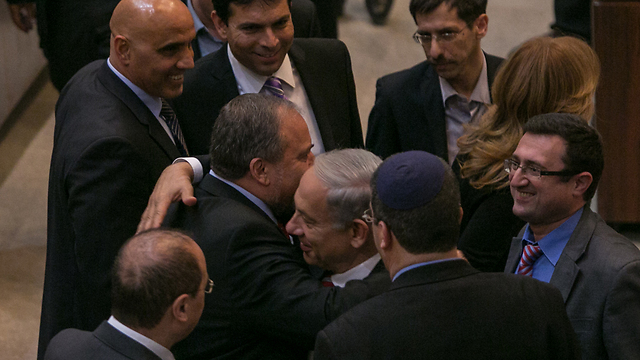 Labor MK Mickey Rosenthal said: "Mr. Lieberman was acquitted in court and there are no more criminal claims as to his conduct. But there's a huge shadow over Lieberman's public conduct. While he was a public official millions of shekels flowed in accounts linked to him, left unexplained by Mr. Lieberman.

"Before he is appointed as foreign minister, maybe should explain to the public where these millions came from."

Yesh Atid MKs shouted from the benches at MK Jamal Zahalka (Balad ) who protested the appointment from the podium, and called on the Palestinians to stop the negotiations with Israel. MK Doron Hoffman interrupted Zahalka and said: "Why are you inciting?" and deputy Finance Minister Mickey Levi said: "Like it or not, the court acquitted him."

MK Ahmed Tibi (United Arab List – Taal) noted in his podium address that "everyone is competing about who is more fanatic, who will hurt the ambling, empty peace process. In my opinion, Lieberman is the true face of Israel's foreign policy – when he's in, and also when his out."

Before the Knesset debate Prime Minister Benjamin Netanyahu said: "I am happy that in a few hours we will be able to swear in and add Lieberman to the cabinet table. I missed him."

"We have a lot to work on, big tests and challenges. It's important to cooperate. I want to personally congratulate you. Welcome back," Netanyahu added.

Lieberman's return to the Foreign Ministry has opened a free-for-all for the Foreign Affairs and Security Knesset Committee's chairmanship, with Yesh Atid 's Ofer Shelach, the Likud 's Tzahi Hanegbi and perhaps a former Yisrael Beiteinu minister all vying for the role.

In addition, Lieberman's acquittal is expected to lead to another ministerial appointment from Yisrael Beiteinu's ranks.

Lieberman's appointment will enlarge the cabinet, which will now include two Yisrael Beiteinu representatives (Lieberman and Minister Yitzhak Aharonovich), which will shift the current balance.

As a result, Finance Minister Yair Lapid is considering to demand to addition of his party's Minister Yaakov Peri to the cabinet.