Study: Half of Israeli children experienced abuse or neglect

Haifa University professors interviewed some 10,000 children over three years, discovered 48.5% of Jewish children, 67.7% of Arab children were victims of abuse, neglect. MK calls on authorities to 'wake up' as study shows gap between reports, reality

A total of 1,273,804 Israeli children experienced abuse, violence or neglect, data released on Tuesday suggest. According to a study peformed by the Israel National Council for the Child (NCC) and the Haifa University, every other child in a Jewish state school or Arab school has been subjected to some form of harm. However the study did not include state-religious and ultra-Orthodox education systems.

The data indicate a troubling reality of an overwhelming gap between the information available to authorities of 50,000 reports of child abuse a year, and the real scope of abuse and neglect.

The study, which was conducted over the course of three years, is the first of its kind ever to be conducted in Israel and is one of the most comprehensive studies on child abuse worldwide. The researchers examined direct testimonies in a national polling sample of 8,239 Jewish children and 2,274 Arab children. The findings indicate that half of Jewish children in public schooling (48.5%) reported they experienced some form of violence, including physical, emotional or sexual harm, as well as neglect. The situation in the Arab sector reveals a grimmer reality: More than two thirds of children (67.7%) reported some form of harm. According to NCC estimates, 540,390 children in the Arab sector have experienced a form of abuse. 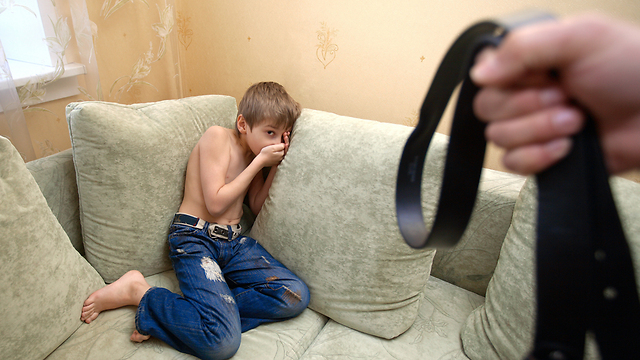 Illustration (Photo: Shutterstock)
The study further reveals that the most common abuse is emotional, mainly defined as parental cruelty, which is repeated systematically and distorts the sense of identity and esteem of 730,139 children. The report shows 399,212 Israeli children have suffered emotional neglect; 370,322 suffered physical violence; and 225,870 were exposed to domestic violence.

The data indicate a significant gap between the number of reports to the authorities and the number of children who first-handedly attested abuse. In 2012, only 48,992 reports regarding suspected child abuse and neglect were filed. These finding reveal that the reports refer to 1.9% of all children. This figure stands against the finding that shows that 48.5% of all children reported that they experienced a form of abuse and harm. The meaning: Welfare authorities and police are unaware of the scope of the phenomenon.

In most cases (81.3%), the children reported that they were abused by men, compared to 18.2% who reported women abusers. In 73.5% of the cases, the offender was familiar to the victim. Almost half of all sexual assaults in the Jewish sector occurred within the family, compared to two thirds of the assaults in the Arab sector. In 21.7% of the cases in the Jewish community, the offender was a relative (parent, grandparent or uncle). The study will be presented on Tuesday at the Knesset's Committee on Rights of the Child, ahead of the Children's Rights Day that will be held next week. Committee chairwoman Knesset Member Orly Levy called on welfare authorities to "wake up" and take action. NCC Executive Director Dr. Yitzhak Kadman said: "This is nothing short of an 'earthquake'. It appears that all we knew to this day about child abuse is just the tip of the iceberg."

The study also determined that neglect is a prolonged disregard of the physical or emotional needs of a child. Sexual abuse ranges from sexual harassment to gang rape.