Israeli assistance has begun to flow into the devastated regions of the Philippines. A search and rescue force, five officers from the Medical Corps and Homefront Command as well as a representative of the Foreign Ministry, landed in Manila on Monday and flew to the disaster zone. Their mission: Evaluate the situation on the ground and determine how to best assist the search and rescue efforts with their expertise and resources.

IDF Homefront Command enlisted search and rescue reservists for the mission, but they received the call-up on short notice. The Medical Corps restocked the medical equipment and supplies expected to be sent with the delegation, as the focus of the Israeli mission will be to set up a field hospital that will treat hundreds of injured survivors who are homeless or separated from their families.

Dov Zingerman, a 48-year-old from Zikhron Ya'akov, was in the Philippines for a scuba-diving trip. He was at a resort on the small island of Malapascua when news hit of the impending typhoon, telling Ynet that the preparations he witnessed did not help the locals. "Nothing could prepare a person for wind of that magnitude," he said. After the storm passed, Zingerman and the other tourists tried to assist the locals: "We bought things for the store owners. We gathered $300-$400, and sent someone to buy the needed supplies."

What do people need?

Eyal Reinich, an Israeli working for the International Red Cross, was sent to the Philippines on behalf of France, unrelated to the Israeli mission. "The sights are difficult, the destruction is on the scale of a Hollywood production, it reminds you of disaster movies. Of the city we are staying in, nothing is left, just giant piles of mud," he told Ynet's studio. "You see ships that arrived from a distance crushing into a school in the city center, trucks that were swept away and demolished houses. You can say nature has gone berserk here, and the pictures amaze in a negative sense." 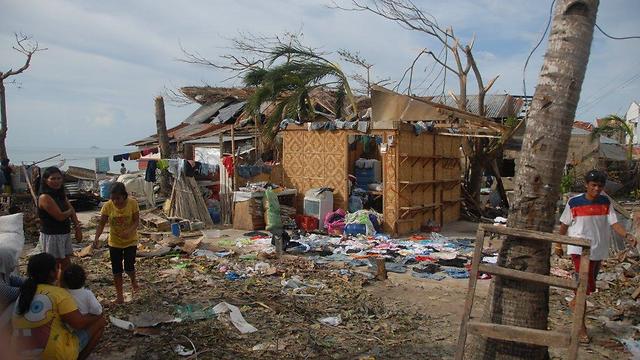 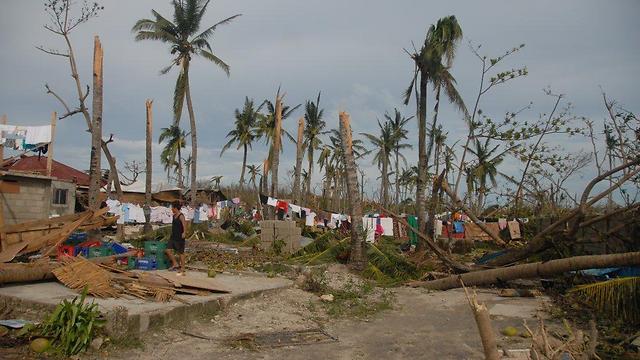 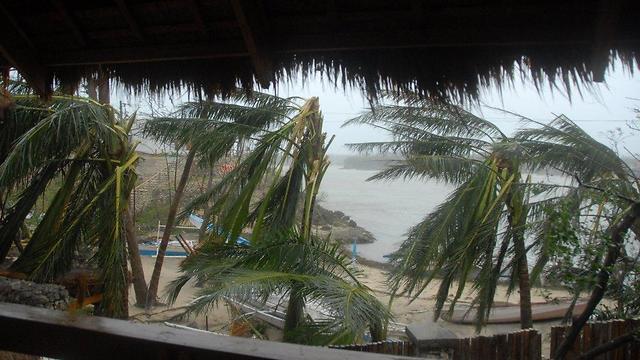 "Water, food, and medicine," are the most needed items according to Reinich. "Right now we are trying to help in this matter. The danger is that if we don't provide them with purified water and basic sustenance, we won't be able to protect the people here from the contagious diseases and the possibility of epidemics."

"We may be in the disaster zone, but there are still villages and entire areas that we simply cannot reach. The Philippine Army, together with international search and rescue delegations, is trying to create bridgeheads, but right now whole areas are still disconnected and no one knows the fate of the people living there."

'Do they want me do die here?'

The assistance efforts for victims of this natural disaster are far from enough. Two Philippine Air Force planes arrived Tuesday morning at the airport in Tacloban, though the facility was damaged in the storm. More than 3,000 people who waited outside the airport over night in the hope to escape the disaster area stormed the planes, trampling every obstacle in their way – including the fence. 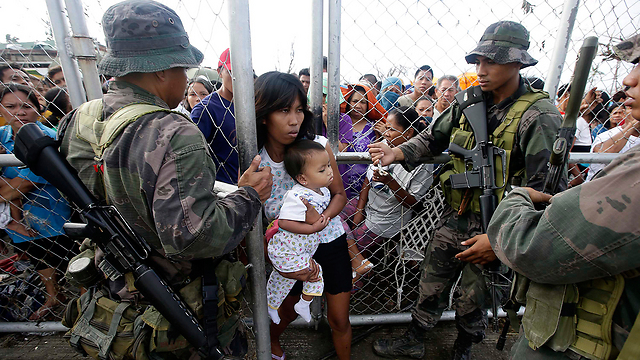 People waiting for food and water at the airport (Photo: EPA) 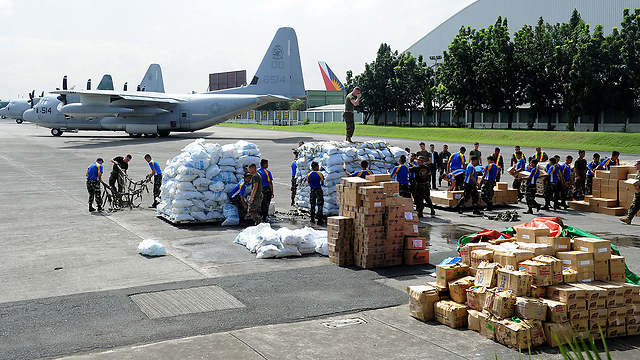 Aid organizations unloading supplies (Photo: AFP)
Only a few hundred people managed to board the planes. The rest were left in the ravaged city, which is suffering shortages of food and drinking water. Only a few dozen soldiers and a number of officers were on call to control the crowd. Mothers lifted their babies above their heads in the rain, hoping to receive preferential treatment; one mother, in her thirties, told that she has been uncontrollably shaking: "I begged the soldiers. I got down on my knees and begged because I have diabetes." The woman, Helen Cordial, whose house was destroyed in the storm, added: "Do they want me to die in this airport? They have a heart of stone."

Most of Tacloban, the epicenter of the disaster, is still in shambles. Islands of ruins containing a mash-up of devastated homes, cars, and vegetation dot the landscape. Malls and stores have been looted clean, and there is no food or water left in any of them. Most of the residents passed the overnight downpours under anywhere they could: between broken homes, on the side of the roadways, and under collapsed trees. Others slept in tents provided by the Philippine government and the assorted assistance agencies.

Local doctors are desperate for medication. In a small improvised clinic with shattered windows, doctors from the Philippine Army and Air Force said that they have treated approximately 1,000 people since the typhoon.