Speaking in public for first time since August, Nasrallah offers political commentary on Israel, US, nuclear talks with Iran. 'Israel is happy… Arab world in turmoil is its goal… It wants to tear Arab countries, divide them religiously, Israel is always pushing towards war'

Hezbollah Secretary-General Hassan Nasrallah left his underground bunker Wednesday to participate in a special ceremony in marking the Day of Ashura which will take place in Lebanon and across the Shiite world.

Under massive security, Nasrallah spoke about his favorite topic – Israel: "There is no doubt Israel is happy today with what is happening in the Arab and Islamic world – that is the conflicts, the problems and the wars." This is Nasrallah's second public appearance since August, when he gave a speech marking Jerusalem (or Al Quds) Day.

Continuing on the theme of the turmoil in the Arab world, Nasrallah added that "this is Israel’s aim. It wants to tear the Arab countries and divide them religiously which helps its situation in Palestine… Israel is always pushing towards war in the region.” 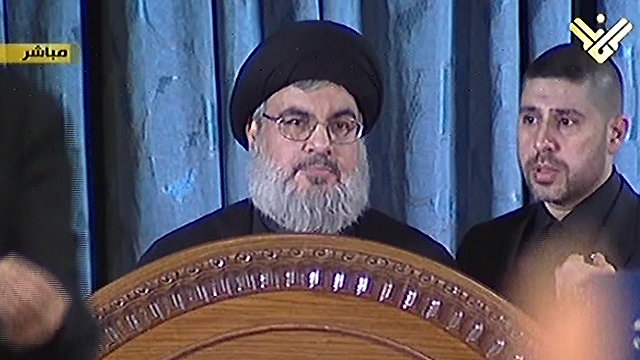 First time out of bunker since August
"However," the terrorist leader added, "Israel is worried about the future because the situation in the region might get out of hand and it will not be able to control it."

Commenting on nuclear negotiations being conducted between world powers and Iran, Nasrallah noted that "Netanyahu is doing everything he can to make the Iranian nuclear negotiations with the P5+1 countries fail. The US cannot go into war anymore because it cannot handle it economically and due to its previous failures in the region but Israel keeps pushing it towards war.

Brining the Syrian issue into the fold and not missing an opportunity to take a jab at Saudi Arabia, he noted that "Some Arab countries were and still are standing by Israel and are refusing a political solution in Syria. 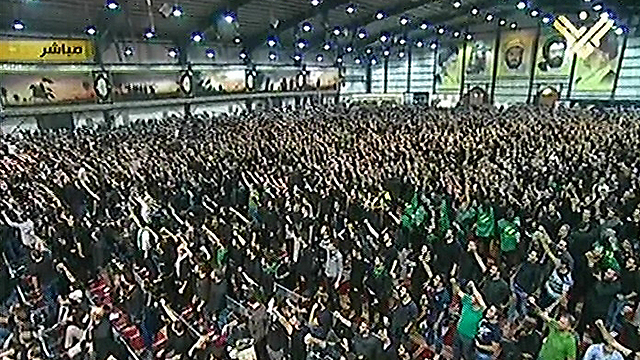 Crowd in Day of Ashura speech

"Saudi Arabia, Qatari, Kuwaiti – the alternative to an agreement between the US and Iran is a regional war. Israel wants to destroy the region. It is unfortunate that Netanyahu has become a spokesperson for some Arab countries and is conveying their worries. The region’s people must know who is looking for war and destruction and who is looking for solutions that preserve Arabs and Islamists’ rights."

Elaborating on one of his favorite themes, the Hezbollah chief also commented on alleged Israeli spying endeavors into Lebanon – the latest of which turned out to be an eagle from one of Israel's Nature and Parks Authority reserves embedded with a radio device.

"Lately, there has been great development in Israel’s spying on Lebanon. Israel has access to the Lebanese people’s means of communication and knows every little detail of everything communicated between them. The state is called on to do something about Israel’s spying on Lebanon and the resistance is ready to help regarding this issue because this issue concerns us all."

Despite his offer to "help" Lebanon in this regard, Nasrallah gladly noted that "if the state is incapable of doing anything, the resistance can do a lot of things about Israel’s spying on Lebanon." 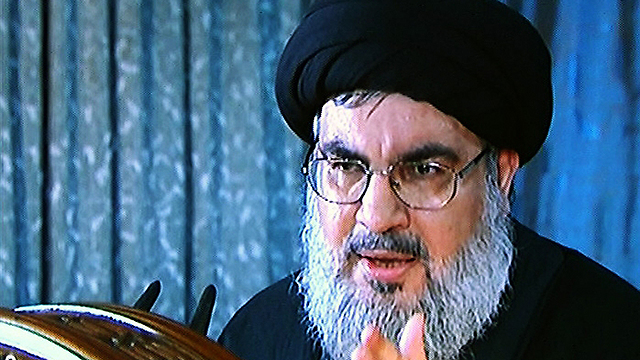 Turning to Iran and Syria's role in local internal strife as well as the massive criticism lobbed at Hezbollah for its involvement in the Syrian conflict, Nasrallah turned to those who believe " that when the nuclear talks with Iran end… Hezbollah will be out of the picture," and said "Do they think Iran will come to Lebanon and tell Hezbollah to give up their rights and national duties?"

Continuing he said "They think we are worried about the nuclear talks. We tell them that if the results of nuclear talks lead to a regional war, others have to worry more than us. We are not worried because we trust our allies: Iran and Syria, because they have never let us down, they have never conspired against us and we are confident with our allies."