Secretary of state fails to convince Senate Banking Committee not to toughen Iran sanctions. Republican Sen. Mark Kirk says 'I was supposed to disbelieve everything the Israelis had just told me'

WASHINGTON – Vice President Joe Biden and Secretary of State John Kerry failed to convince the Senate Banking Committee not to toughen sanctions on Iran after testifying before the committee.

Committee Chairman Sen. Tim Johnson, a South Dakota Democrat, said he has yet to decide on the matter. Sen. Chuck Schumer said he was “dubious” about the deal, is exploring “further details” but “is worried “that we are reducing sanctions while Iran is not reducing its nuclear capabilities.”

While democrats remained cautious so as not to directly challenge the administration, republicans spare no criticism.

“It was fairly anti-Israeli,” Sen. Mark Kirk (R-IL) said to reporters after the Senate briefing. “I was supposed to disbelieve everything the Israelis had just told me, and I think the Israelis probably have a pretty good intelligence service.” He said the Israelis had told him that the “total changes proposed set back the program by 24 days.”

Kerry warned the committee against scuttling a historic opportunity for a nuclear pact with Iran by pressing ahead with new sanctions while international negotiators seek to prevent Tehran from being able to assemble an atomic weapons arsenal.

“Our hope is that no new sanctions would be put in place for the simple reason that, if they are, it could be viewed as bad faith by the people we are negotiating with,” Kerry said before entering a closed-door briefing with members of the Senate Banking, Housing and Urban Affairs Committee, according to CNN.

“It could destroy the ability to be able to get agreement,” he added, “and it could actually wind up setting us back in dialogue that’s taken 30 years to achieve.” 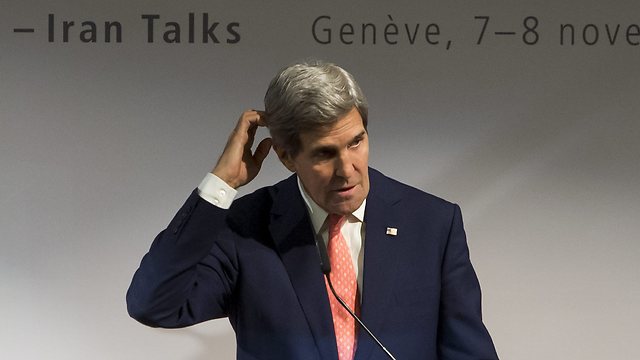 The briefing may have been a closed session but senators claimed they received very little information.

Sen. Bob Corker told reporters after the briefing he was "very disappointed in the presentation” and noted that the senators were given no details of the interim deal being formulated in negotiations between Iran and world powers in Geneva this month. He described the briefing as "an emotional appeal."

"We ought to be actually ratcheting up the sanctions against Iran," Senate Minority Leader Mitch McConnell, said. "What the administration was promoting is something the Israelis think is a bad deal for them. It's pretty clear the Sunni Arab allies of ours also think it's a bad deal. Looking at it strictly from an American point of view, I think it's a bad deal as well."

Meanwhile, National Security Adviser Susan Rice commented on Israel's public objection to the deal. "I think it's important that everybody understand what the deal is that needs to be reached and then they can make a judgment on its contours," Rice said at the Washington Ideas Forum in Washington, D.C.

Asked if Netanyahu didn't understand the deal before issuing his harsh attack on it last week, Rice did not mention Netanyahu by name but indicated that he did not.

"Well it's not done, so by definition it's premature to judge it because the outlines have yet to be finalized," she said.