The Israeli Air Force attacked two concealed rocket launching pads in the northern Gaza Strip. The IDF stated that the strike was in response to mortar fire into Israeli territory earlier on Thursday.

According to the IDF, the strike was a success, and the planes returned safely to their bases.

The strike occurred on the anniversary of Operation Pillar of Defense, marked by Hamas. 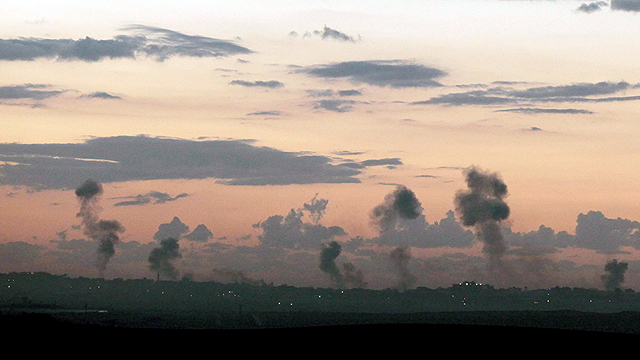 Residents in the western Negev told Ynet they heard echoes of explosions, which they at first believed to be additional fire from Gaza.

Earlier on Thursday two mortar shells were fired from the Gaza Strip toward Israel, one landing on the Israeli side of the border, near an IDF force clearing terrain west of the fence. No one was injured and no damage caused. The second shell apparently exploded in Palestinian territory.

The IDF Spokesperson's Unit stated that "the IDF will tolerate no attempt to harm Israeli citizens and soldiers and will continue to act against any element which uses terror against Israel.

"The terror-group Hamas is the address and bears responsibility."

This is the third Air Force strike in Gaza in recent weeks. In late October the Air Force attacked concealed rocket launching pads in the northern Strip, after which the Hamas government ordered the evacuation of its security branches headquarters.

About two weeks ago three Hamas militants were killed in an Air Force strike east of the village of al-Karara in the southern Strip.