Iran: World must recognize our 'nuclear rights' for talks to succeed

With nuclear talks set to resume Wednesday, Iranian FM says success contingent on world's acceptance of Iran's 'nuclear rights,' but nonetheless says he is hopeful. Meanwhile, President Peres urges Israel to play nice with US amid week of aggressive rhetoric between allies

Iran's foreign minister said he is hopeful ahead of next week's negotiations with world powers and reiterated Tehran's demand for recognition of what it calls its "nuclear rights," while US and Israel continued to disagree about a nuclear deal with the Islamic Republic.

Talks between world powers and Iran are set to resume on Wednesday in Geneva after failing to strike an accord last weekend.

Mohammad Javad Zarif said in comments carried by the semi-official Fars news agency on Friday that there is no chance for the upcoming round of talks to succeed if the West ignores Iran's demand for formal recognition of its right to enrich uranium. 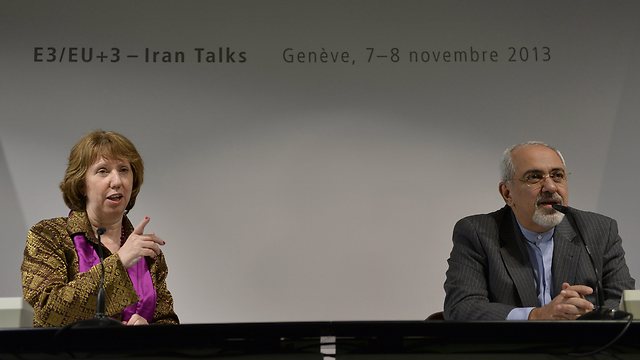 Meanwhile, tensions between Israel and the US seemed to calm down after a week of roundabout accusations by Prime Minister Benjamin Netanyahu and US Secretary of State John Kerry.

President Shimon Peres urged Israelis on Friday to show respect for the United States, seeking to soothe relations with the country's most powerful ally that have been strained over Iran.

"We must not underestimate the importance of this friendship. There can be disagreements, but they must be conducted with a view to the true depth of the situation," Peres said in comments released by his office. "If we have disagreements we should voice them, but we should remember that the Americans also know a thing or two. We are not the only ones," he said. 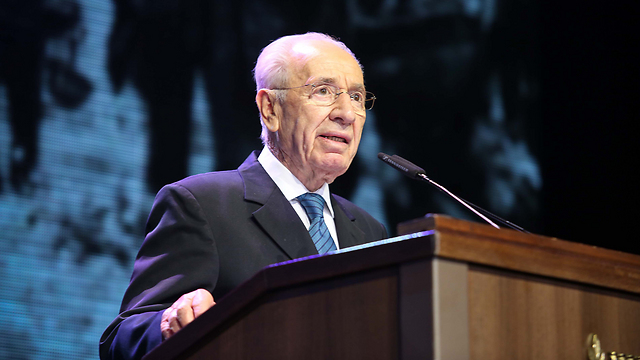 Nonetheless, the two allies were far from in agreement on Thursday as US President Barack Obama attempted to dissuade Congress from increasing sanctions against Iran, Netanyahu said he was unimpressed by a report from the UN's International Atomic Energy Agency that Iran had frozen its nuclear activities.

"I am not impressed by the report published this evening," Netanyahu was quoted by his office as saying Thursday. "Iran does not need to expand its program because it already possesses the necessary infrastructure for building a nuclear weapon."

The IAEA said that, in the past three months, only four new centrifuges had been installed at Iran's Natanz plant, compared with 1,861 in the previous period.

The report added that Iran has also not begun operating any new-generation centrifuges and that "no... major components" had been installed at a reactor being built at Arak. The faster centrifuges are of concern to world powers because, in theory, they shorten the time Iran would need to produce enough weapons-grade uranium for a nuclear bomb. 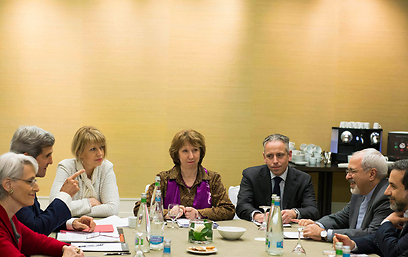 Meanwhile US President Barack Obama sought to reassure skeptical US lawmakers on Thursday that any easing of sanctions on Iran that emerges from negotiations could easily be reversed and "ramped back up" if Tehran fails to curb its nuclear program.

Obama spoke a day after Vice President Joe Biden, Secretary of State John Kerry and other top US officials warned senators that implementing new sanctions could scuttle the delicate negotiations between Iran and six world powers due to resume in Geneva next Wednesday.

"If we're serious about pursuing diplomacy, then there's no need for us to add new sanctions on top of the sanctions that are already very effective, and that brought them (the Iranians) to the table in the first place," Obama told a White House news conference.

"Now, if it turns out they can't deliver, they can't come to the table in a serious way and get this issue resolved, the sanctions can be ramped back up," he said.

At the White House, Obama sought to answer critics who accuse him of preparing to ease sanctions prematurely. He said that in return for Iran's agreement in a "phase-one" deal to halt its nuclear advances, "we would provide very modest relief at the margins of the sanctions that we've set up."

"But importantly, we would leave in place the core sanctions that are most effective and have most impact on the Iranian economy, specifically oil sanctions and sanctions with respect to banks and financing," he added.

Obama said that would give world powers a chance to test how serious Tehran is about negotiating a final deal to dispel Western suspicions that it wants to develop a nuclear weapon, something Tehran denies it is seeking.

"It also gives us an assurance that if it turns out six months from now that they're not serious," he said, "we can dial those sanctions right back up."