Hezbollah General-Secretary Hassan Nasrallah has sparked a lively debate about his newest security accessory, after making two forays into the outside world in recent days. Nasrallah made two public appearances to honor the Muslim Holy Day of Ashura, with an oddly-equipped security guard by his side. The two sightings are unusual for the Hezbollah leader, who is known for maintaining heightened security protocols and remaining 'underground' for months at a time.

The emergence of the oft-pursued Hezbollah leader – twice within 24 hours – in the southern suburbs of Beirut has been a curious event in Lebanese media. The odd briefcase held by his security guard garnered much attention from local media sources. 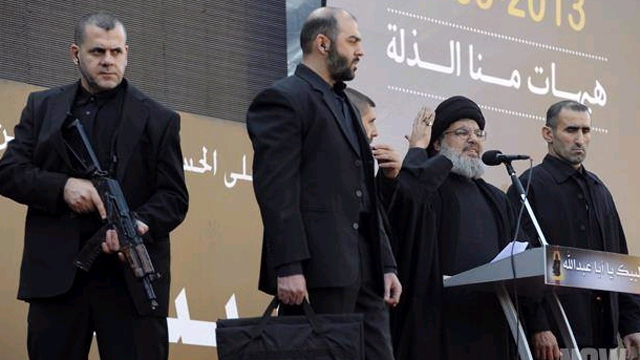 Nasrallah on stage with unarmed bodyguard carrying the suitcase

According to Lebanese media reports, the briefcase transforms into a makeshift bulletproof blanket. The reports claim that Scotland Yard employs such briefcases in anti-terror operations.

The device is a blanket-in-a-suitcase which protects against Molotov cocktails and is meant for use during terror attacks, allegedly capable of stopping submachine gun fire. 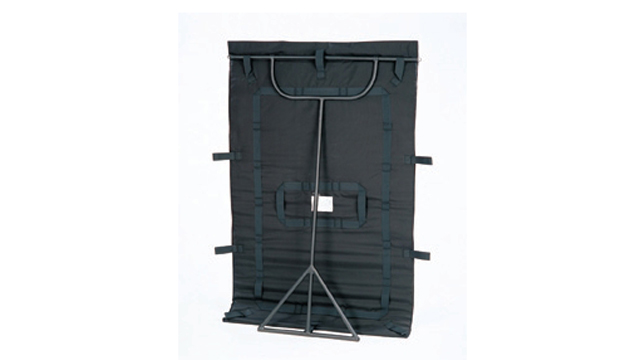 Intelligence researcher, Ronen Solomon, who regularly analysizes the intelligence mechanisms and security protocols of Hezbollah, told Ynet: "In the wake of the wave of attacks against Hezbollah strongholds and the normal concern of assassination attempts against senior members of the organization, security personnel in the organization began to integrate new methods like training dogs to detect explosive material.

"Also, for the first time, during Nasrallah's speech last Thursday, a new device was spotted in the shape of a briefcase, carried by one of his unarmed guards."

The briefcase, which is already in use by anti-terror fighters in England and the US, is "a carrying kit for ballistic protection against assassination attempts, which is bulletproof and bombproof. The same kit entered use in the security systems and terror fighting units after the 2008 Mumbai attack."

According to Solomon, the model found in the hand of Nasrallah's guard is probably produced by Protech, a manufacturer that specializes in production of security apparatuses for special anti-terror units.

"In case of need, the guard opens the briefcase and creates a wall of protections between his charge and the source of fire or the explosive device thrown in his direction. It protects from 7.62mm rounds, explosive fragments, and the heat waves created by the blast," said Solomon.