Hollande lavished praise on his hosts, saying that "Israelis turned their tragedy into the crane which built their state." He promised to safeguard the Israeli interests against the Iranian nuclear threat and called for establishing peace between Israel and the Palestinians, saying "peace requires courage, even more than war."

During the warm and friendly speech, the French president asked "to salute the entire Jewish people, whose genealogy is entwined with the history of the whole of humanity." He emphasized the strong connection between Israel and France, clarifying that "friends tell the truth even when they disagree." 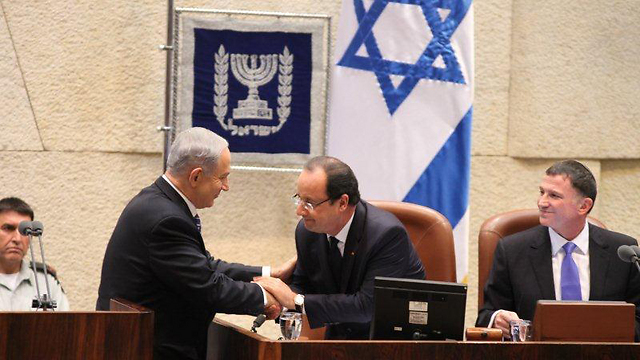 Netanyahu, Hollande at Knesset (Photo: Knesset PR)
"France has always been to Israel's right, from its first day, to support its right to exist. Sixty-five years later I come to say in Israel, in the name of France: The friendship between us is firm, more than the passing leaders who come and go, and even more than ups and downs of international life," he added. Hollande addressed the Iranian nuclear issue saying that his country "has nothing against Iran. It is a country which itself is the product of a long and magnificent history. We have nothing against the Iranian people, it deserves civil nuclear energy, but we cannot accept that they will have a nuclear weapon because it poses a threat to Israel and other countries in the region and we all know that well: It is a danger to the world."

"When the negotiations stalled and it appeared that nothing would move, France worried that all the demands will be accounted for and all guarantees will be planned for. Now Iran needs to answer not in simple words and not with futile assurances, but with measurable acts. I say here in a clear manner that we will continue with the sanctions as long as we are not certain that there is an unequivocal concession by Iran of its nuclear military program."

'Welcome to capital of Jewish people'

Netanyahu welcomed Hollande: "Welcome to Jerusalem, welcome to the capital of the Jewish people." He added: "All of Israel is following your arrival with feelings of love and honest friendship. We respect your stance that a nuclear weapon in Iranian hands poses a danger not only to Israel but to the whole world." "In this house I said a few times that I accept the solution of two states for two people, within the frame of real peace, and the resolution of the conflict… Not every member of the Knesset in this house agrees with these statements but on one matter most of us are united – for the peace to be real it must be two-way." "You cannot ask Jews to recognize a Palestinian national state without demanding Palestinians recognize a national state for the Jewish people," Netanyahu added. "I call Abu Mazen from here: Let's break the freeze, come to the Knesset, I'll come to Ramallah. Come to this stage and recognize the historical truth – the Jews have a connection of close to 4,000 years to the land of Israel." "The Jews have the right to self-determination and in a true peace, Palestinian demands of Israel will end, aside from national demands about land and the sovereignty of the state," Netanyahu reiterated.

'House not divided on Iran'

Opposition Chairwoman Shelly Yachimovich (Labor) said that "this house is not divided on the subject of prohibiting Iran from having the capability of producing nuclear weapons the moment it decides to," adding that "we are leading the opposition because of big differences, ideologically and practically, between the path of the prime minister and our way."

"If there is a breakthrough towards an agreement with the Palestinians, we will serve Netanyahu as a stable political safety net. Despite our differences, we will not be the opposition here," she clarified. Knesset Speaker Yuli Edelstein said that "the hope for peace is shared by all of us, though the proper way to realize it is a matter of disagreement." He continued: "Only an honest and deep recognition of Israel's right to exist as a Jewish and democratic nation could rehabilitate the trust lost and to develop an opening for future cooperation and the hope for peace." Hollande, whose standing in France has been dwindling partly because of a proposal to raise taxes on incomes greater than 1 million euro to 75%, has garnered affection in Israel after it was discovered that he prevented the signing of an agreement between Iran and the West in Geneva.

"I will always remain a friend of Israel," he said when he landed in Ben Gurion, as he emphasized his country's obligation to prevent an Iranian nuclear weapon.

"France will not surrender to this threat, it will not concede, and it will do everything for peace and for the safety of Israel," he explained. "As long as we are not entirely sure that Iran gave up on a nuclear weapons – we will keep our stance."