Fifty years after the assassination of US President John Fitzgerald Kennedy, the Israeli Archives released documents related to the response of the Israeli government to the 1963 tragedy. "They decided to turn over the whole world and investigate this thing to the end. Whether they have the possibility to investigate – I do not know," said then-Foreign Minister Golda Meir.

Meir had returned from the funeral of the American president filled with doubts about the identity and motive of the killer. 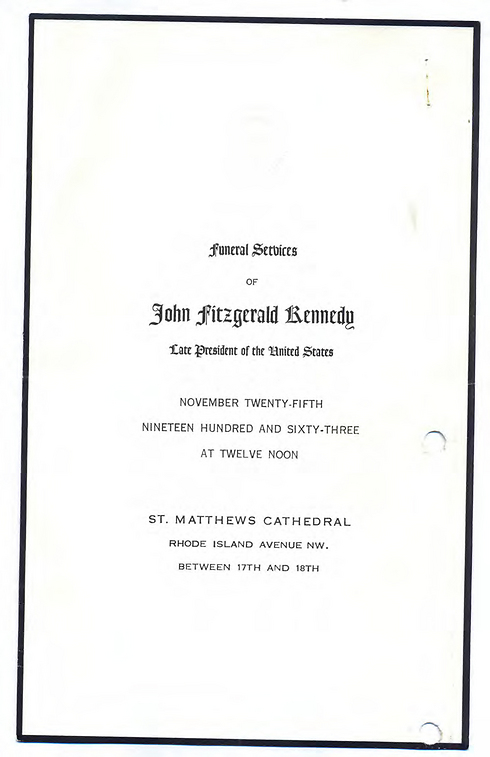 The announcement of Kennedy's assassination on Novemeber 22, 1963 came as a shock to the majority of the Israeli government, headed by Levi Eshkol. At half past midnight, mere hours after the assassination, Eshkol sent JFK's replacement, President Lyndon B. Johnson, a letter of condolences.

"The government, the people of Israel and I personally are stricken with shock and grief from the president's assassination. He proved himself as a wonderful president and a brave leader of the free world who instilled hope in the hearts of humanity as a whole. Please pass the deep condolences of the Israeli government and public, aas well as my personal condolences, to Mrs. Kennedy and her children." At the same time, Eshkol published an official pronouncement in which he extolled the virtues of the American president. "His short tenure was full of delight and opportunity. The world has lost a great leader who fought for democracy and equality of rights in his great nation and in the whole world. The late president was aware of the independence of enslaved populations and of the needs of developing countries, and he hastened to offer them wide-ranging assistance materially and spiritually." "He fought to thaw the Cold War and to promote coexistence... of east and west. Because of his initiative, the first international nuclear test ban was signed in Moscow. Kennedy was a loyal friend to the people of Israel and their state," continued the pronouncement.

The heavy shock Eshkol experienced from the murder of the superpower's president was expressed in a personal letter sent to his brother, Lifa Shkolnik, who lived in Moscow. "Today, or more accurately yesterday, US President Kennedy was assassinated and it is a great disaster. We'll see how things proceed in the future," he wrote to his older brother. Two days after the murder, the Israeli government convened for a special grieving session, in which it was decided to have three full days of mourning. All official ceremonies were canceled and flags were brought to half-mast. "We have all been hit by the sinful and stupid murder of US President John Fitzgerald Kennedy. The world has been stunned, including us" said Eshkol to the ministers.

"He was at the beginning of his path... and was revealed as a rising power. The world was allowed to believe and we believed because within him was stored much more than he had time to reveal in the two, three years of his tenure. There was a future to discover and ascend. Proponents of peace and freedom hoped he would lead the world out of the labyrinth and the dangers." 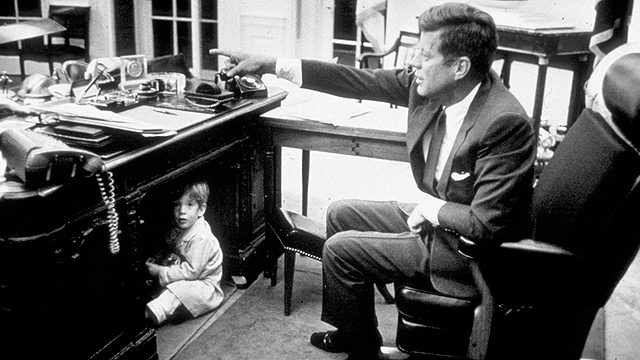 Then Foreign Minister Meir was staying in New York and joined President Zalman Shazar at the funeral. Upon her return to Israel, she reported to the ministers on the agitated atmosphere in the US following the murder, as well as the unanswered questions regarding the murder and the murderer. 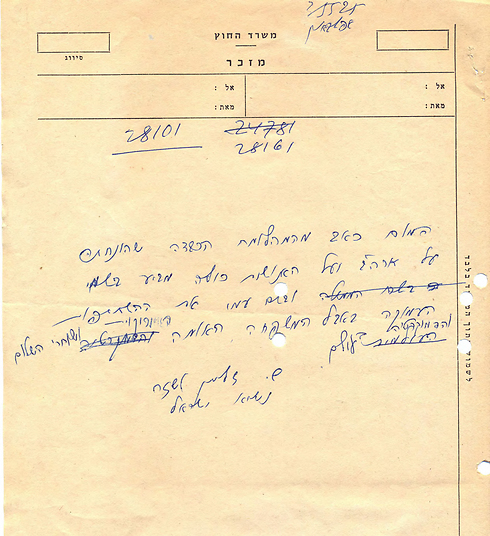 President Zalman Shazar's notes for a letter of condolences
Prior to the murder, Meir said, Kennedy had many opponenets who felt the president was too distant from the people. After the murder, the atmosphere changed. "There was a feeling that this turned over the Americans' world. There was really a feeling of personal loss among everyone. They say in Washington that there were two million people in the streets. I have never seen anything like it."

According to Meir, the conduct of Jacqueline Kennedy was awe-inspiring: "A cultured woman... who appeared as an unusual personality, some mental powers that are hard to explain. It is impossible to understand how a person holds a stand like that. It's not for naught that she sits there without hysterics in front of the public. In the American press it was written she gave America the one thing it never had – a sense of royalty." 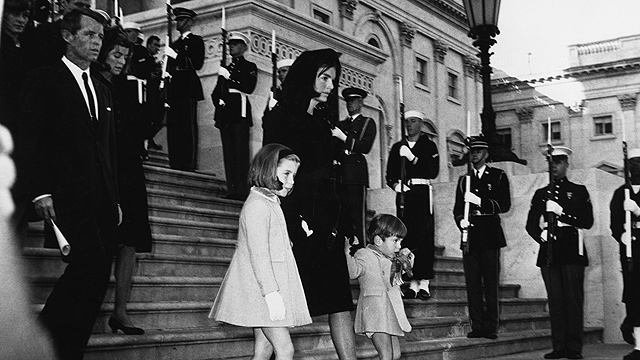 Jacqueline Kennedy at JFK's funeral (Photo: Getty Imags)
On Kennedy's ties with Israel, Meir noted: "I believed him that he was a friend, regardless of people saying he needed Jewish support. Let's assume needed the support of Jews, but I did not doubt his friendship. Sure there were disagreements; there were misunderstandings. We won't get everything we want, I had no doubt... but I mostly never stopped believing it was a serious and important ally."

US Jewry, Meir told the ministers, breathed a sigh of relief when it became clear the assassin was not Jewish. "Why do you need to think that a Jew would murder Kennedy? I do not know, but they were relieved that he was not."

She shared with the ministers her impression of the mystery surrounding the murder. Even at this early stage, the foreign minister believed that there was more to the crime: "This whole matter has dark corners, which may never be cleared up.

"Today," she added, "there was a report that Oswald was not sane, not balanced, and was mentally ill. The fact – some strange thing here with the Dallas police – was that an officer entered the building to check that everything was in order, passed a guy with a large package and asks him what it is. The man answers: a curtain. Instead of asking him if it's really a curtain. And when someone tells him 'he works for us,' he is satisfied. What does it matter if he works for them or doesn't work for them? He has a package – check what's in the package. They didn't check that package." 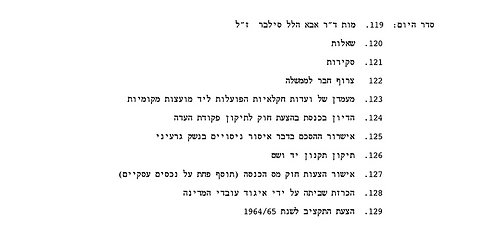 Dallas police, said Meir, acted very suspiciously. "Oswald was in jail as an agent of Castro, a Communist… Very strange things, but even more odd is the Jack Ruby affair. Since there was television, he was on television... Oswald saw him moments before he went over to him, he flinched, it is clear that Oswald knew him."

"How did Ruby get in there? How does a stranger enter into a police station? How does he park his car in a parking area for police cruisers? Right after this a cop said – if I had seen him I would have driven him away. We know him, he has a police record. If one cop knew him, how did he get in?"

Golda's testimony to the ministers

A government official, Meir revealed to the ministers, suggested to her that it is not clear that Oswald worked alone. "Now with this investigation, it's not only an investigation of how Kennedy was assassinated, but also who is Ruby, for what and why did he murder Oswald? An important administration official told me that the question of if Ruby did this of his own accord or was he ordered to do it to silence Oswald is a question for us, a question of war and peace."

Meir expressed deep concern over the possibility that Ruby, a Jew, was involved in a conspiracy to assassinate the president. "If he is an agent of Castro, if there is an underground organization working for Castro that went as far as the assassination of the president, and it's organized in such a way that the murderer is silenced in case he talks, oy vey if there is a Jew inside that.

"They are treating the Oswald murder severely, I would say – no less seriously than the murder of Kennedy. If this is part of a plan, if there is an underground – not only am I not a detective, I don't even like reading detective novels – but I ask myself, I think Ruby is an errand boy and I say – either he belongs to a political underground movement or to the Dallas police," she continued.

"It happened inside the building?" asked Justice Minister David Yosef.

"Inside the building," Meir answered, "In the hallway that television personnel and journalists were pouring into, they checked every single person. The door opens and Oswald comes out handcuffed to two policemen. You can see there is a person with a gun in the crowd who goes over to him. There's a picture of Ruby shooting, a policeman is standing by him looking. It was fantastic. If he was sane of mind he knew there was no way out of there, but he went to 'sanctifying the name' in order to avenge Kennedy's death."

"In Texas or Dallas they say that assassinating the president is not a federal crime. It's one of the strange things, this shortcoming in the law… this is why the FBI isn't in the picture," Meir said.

"In the first few days there was a statement from the chief of police in Dallas: when they investigated Ruby right after the murder, he was wild, completely unbalanced. After an hour he quieted down, acted normally, spoke with sense... They decided to turn over the whole world and investigate this thing to the end. Whether they have the possibility to investigate – I do not know."