Iran negotiator: No deal without right to enrich uranium

Iranian deputy FM says there is 'lack of trust', no deal excluding right to urniaum enrichment will be accepted. Meanwhile, French FM urges West to stand firm, hopeful deal could be struck this week

Iran will not sign up to a nuclear deal with world powers unless they accept its right to enrich uranium, its chief negotiator to talks in Geneva said Thursday.

"No deal that does not include the right to uranium enrichment from start to finish will be accepted," Abbas Araqchi said on his Twitter account, quoted by official news agency IRNA.

Araqchi also warned of a "lack of trust" as an obstacle to sealing an accord at nuclear talks in Geneva between the Islamic republic and major powers.

"The main obstacle is the lack of trust because of what happened at the last round. As long as trust is not restored, we cannot continue constructive negotiations," Araqchi told state television.

"There are major differences. There is a chance of a deal by tomorrow (Friday) but it's a difficult task," the negotiator said, calling for his counterparts to be "flexible" and to show goodwill.

Meanwhile, France's foreign minister said on Thursday the West needed to be firm in its dealings with Iran over the country's nuclear program, but he was hopeful an accord could be struck this week.

"I hope so," Laurent Fabius told France 2 television when asked if there could be a deal. "But this agreement can only be possible based on firmness." France and other major powers are meeting with Tehran's representatives in Geneva this week for a third round of talks with a view to reaching a preliminary agreement on curbing Iran's nuclear program. Iranian Supreme Leader Ayatollah Ali Khamenei said in a speech that Tehran would not step back from its nuclear rights and he had set "red lines" for his envoys in Geneva.

Khamenei also called Israel a "rabid dog", and criticized France, which spoke out against a draft deal floated at the Nov. 7-9 negotiating round, for "succumbing to the United States" and "kneeling before the Israeli regime". 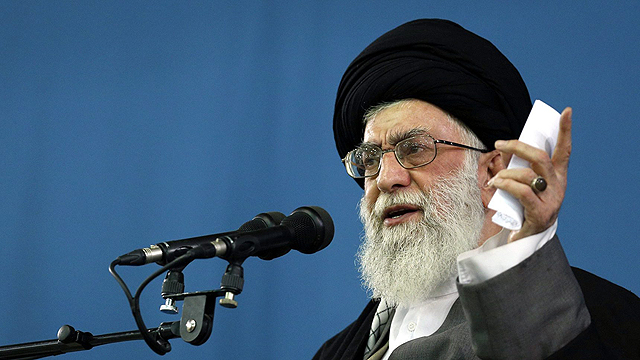 Iran's spiritual leader Ali Khamenei (Photo: EPA)
France has consistently taken a tough line over Iran's nuclear program, helping Paris forge closer ties with Tehran's foes in Israel and the Gulf. Dismissing Khamenei's comments, Fabius said France's position had been accepted by the other five other major powers – United States, Russia, China, Britain and Germany – and that a strong stance was not just a question of defending Israel's security, but of ensuring security in the region and world. "For now the Iranians have not been able to accept the position of the six, I hope that they will accept it." Western governments suspect Iran has enriched uranium with the covert aim of developing the means to fuel nuclear weapons, which Tehran denies. Policymakers from the six governments have said an interim accord on confidence-building steps could finally be within reach to defuse a decade-old standoff and dispel the specter of a wider Middle East war over the Islamic Republic's nuclear ambitions. France has set four conditions for an interim deal: Put all Iranian nuclear installations under international surveillance, suspend 20 percent uranium enrichment, reduce existing enriched uranium stocks and stop construction of a heavy water plant at Arak that could potentially produce weapons-grade plutonium.

"I'm not saying a deal will get done, but we are now in a process and we're entering the core of the subject," a French diplomat said. "The problem now is reconciling the red lines from both sides."