Activists, fishermen will try to reach open seas of Mediterranean to remind world Gaza is still under closure. Protesters are expecting Navy interference but say will not confront seamen

A group of Palestinian activists from Intifada Youth Coalition is planning on sailing from Gaza Strip in an attempt to challenge the naval blockade on the territory.

The group of 200 Palestinian activists, backed by other foreign activists who are currently in Gaza, is planning to take boats from the Palestinian coast to the line of the marine closure, six nautical miles from shore, on Friday. It is also likely that the flotilla will try to cross that line in order to achieve a conscious victory.

The act of demonstration is being done in conjunction with Palestinian fishermen, said the message that the activists published, who are demanding that the Israelis extend their fishing area. The activists say the purpose of the flotilla is to remind the world that Gaza is still under a naval closure. In the announcement, the members called for "powerful world sources" to press for more naval and land convoys to enter Gaza.

A Gaza spokesman, who is involved with the group, told Ynet that the flotilla will have from three to five large boats and five smaller boats, which will sail as one unit with the goal to reach the six-mile line, or close to it. 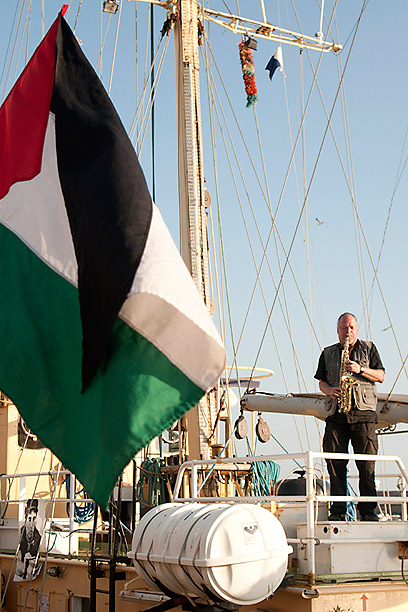 The spokesman said there will be Palestinians and foreign activists on the vessels, along with video capturing equipment to document the event. The activists are expecting the Israeli Navy to attempt to prevent them from crossing the naval closure border but they are not sure in which ways the navy will respond, the spokesperson said.

The representative also said the activists are not planning on confronting the seamen if they try to stop them. He said he did not know if the Hamas government gave approval to the event, but said that with the approval of Gaza's fishermen's union, it shows that officials know about the event and have agreed to let it take form.

"Not all of the fishermen in Gaza who are participating in the flotilla are enthusiastic about the idea of crossing the prohibited six nautical mile line because they are worried for their livelihood and are not interested in problems."