Obama pushes back on critics of Iran deal

US President takes jab at Netanyahu, fellow deal protesters, says 'when I ran for president, I said it was time for a new era of American leadership, as president I've done what I've said'. Meanwhile, US releases $8 billion in frozen Iranian assets

WASHINGTON – President Barack Obama took on critics of a newly brokered nuclear deal with Iran on Monday by saying tough talk was good for politics but not good for US security. "(We) cannot close the door on diplomacy," the president stressed in a speech in San Francisco, while responding to nuclear deal critics, including Israel and members of the Republican Party.

"If Iran seizes this opportunity and chooses to join the global community, then we can begin to chip away at the mistrust that's existed for many, many years between our two nations," Obama said one day after historic deal was struck with Tehran.

"When I first ran for president, I said it was time for a new era of American leadership in the world, one that turned the page on a decade of war and began a new era of engagement with the world. As president and as commander in chief, I've done what I've said." 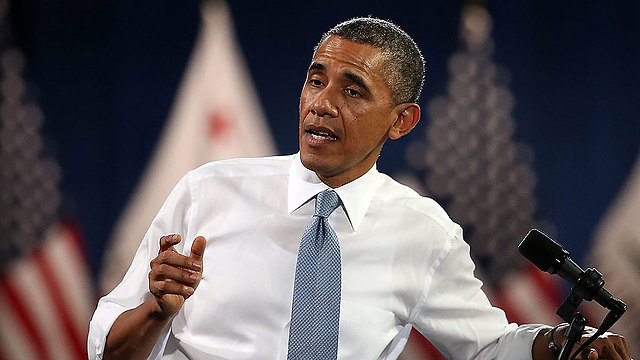 Obama in San Francisco (Photo: AFP)
Indeed, the Americans are not wasting much time and commencing the relief in sanctions. Iranian Government Spokesman Mohammad Baqer Nobakht said that the US government has released frozen Iranian assets worth $8 billion as part of the interim agreement signed in Geneva, Iranian news agency FARS reported. Nobakht was quoted as saying the deal will substantially aid the Islamic Republic's economy.

White House Spokesman Josh Earnest said in a briefing to journalists onboard the Air Force 1 that President Barack Obama wishes to begin consultations with Israel right away ahead of talks between Iran and world powers for a final agreement.

Earnest made the remarks after a phone conversation between US President Barack Obama and Prime Minister Benjamin Netanyahu Sunday night regarding the interim Iranian accord and the steps that will follow. Mutual visits between Washington and Jerusalem are expected to be held in the next few days. Earnest said they are determined to seize the opportunity that was created, yet did not specify a date for the renewed negotiations with Iran. In a first statement by the Saudi royal family regarding the nuclear Iran deal, Prince Alwaleed bin Talal said that "Iran is the real danger, not Israel." In an interview with news agency Bloomberg, the Saudi prince said that in the scene of an Israeli strike in Iran, "publicly, (the Sunnis) would be against it. Privately, they would love it." 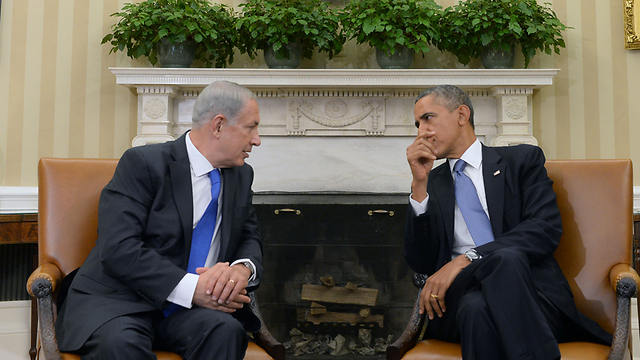 Netanyahu, Obama in Washington (Photo: Kobi Gideon, GPO)
In recent weeks Riyadh has denied reports of a "covert alliance" between Saudi Arabia and Israel against the Iranian threat, but the Saudi prince clarified on which side of the court both countries stand. "There's no confidence in the Obama administration doing the right thing with Iran. We’re really concerned – Israel, Saudi Arabia, the Middle East countries – about this."

'Peace with Palestinians would isolate Iran'

However, bin Talal criticized Israel and said that if Netanyahu would make advances in the peace process with Palestinians, he would help marginalize Iran. "If you want to weaken Iran’s position in the Arab world, you should have peace with the Palestinians. This is the heart of it. Hezbollah will not go away, but they will be weakened."

The Saudi prince, like Israel, objected to the exemptions that Iran received and called for increased sanctions. "Why are they offering relief?” he asked. “Keep the pressure on. Sanctions are what brought about the negotiations to begin with! Why not keep the pressure up?” 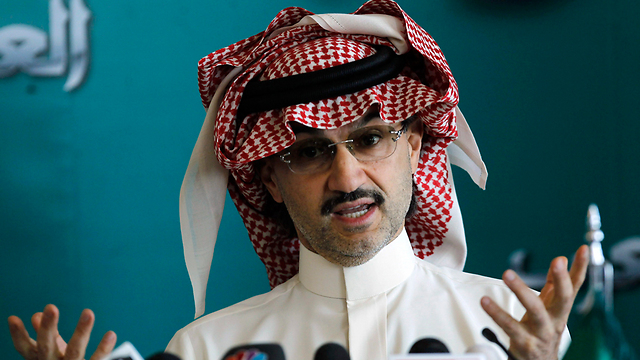 Prince Alwaleed bin Talal (Photo: Reuters)
“Obama is in so much of a rush to have a deal with Iran,” he said. “He wants anything. He’s so wounded. It’s very scary. Look, the 2014 elections are going to begin. Within two months they’re going to start campaigning. Thirty-nine members of his own party in the House have already moved away from him on Obamacare. That’s scary for him.” Bin Talal's interview is the way in which the Saudi royal family publicly expresses its position and grief over the interim nuclear deal that was struck in Geneva. Bin Talal does not hold an official position within the Saudi regime; he is a wealthy billionaire with a long line a worldwide businesses.

The Saudis have much to say about the Obama administration handling of the Iranian, Syrian and Egyptian issues. According to bin Talal, "when (Obama) put that red line out (in Syria), and the red line was crossed, he blinks. You think the chemicals are going to come out, one hundred percent? Come on." When Obama “blinked,” he suggested, the Arabs came to the conclusion that he would not stand up to Iran, either.