Study findings reveal despair among many layers of society. Rabbi: 'Poverty in Israel a strategic threat on our existence'

A new study draws a picture of a worrying situation across wide swaths of Israeli society. According to the Taub Center for Social Policy Studies in Israel study, published on Wednesday, 35% of Israelis have reached a state of severe distress. The study discovered that 20% of Israelis forgo food because of financial distress, while 13% give up using electric appliances or the phone.

Among citizens who required medical services, nearly 40% neglected dental care due to financial considerations and 15% managed without their prescription medications. 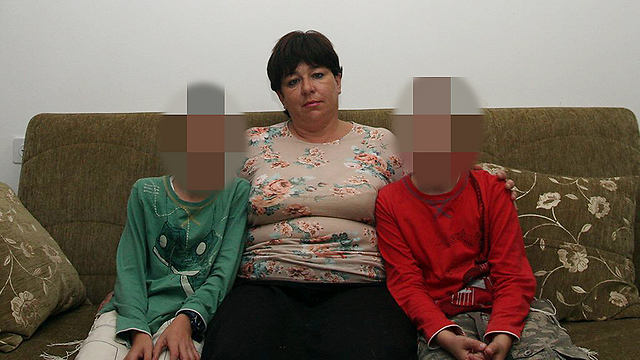 Angelica Moscovitch with her children (Photo: Roee Idan)
The researchers based the study on data from the societal survey of the Central Bureau of Statistics (CBS). According to the figures released by the CBS at the beginning of November, the median monthly income of an employee is NIS 6,541 ($1,837). The researchers split the population into quarters with the median income as the base-line. Material distress, as defined by the researchers, extends beyond the bottom quarter. Of the people in the third quarter – those earning above the median income – about 30% do not cool or heat their residence.

The researchers learned that in the haredi sector, which relies on financial support, there is a greater reliance on assistance from parents, friends, and family. In the Arab sector, families rely on their children to a greater extent. According to the researchers this may suggest that the haredi are "newly poor" comparatively while the Arab population has been suffering financially for a long time.

But behind the numbers are names and faces; there is the reality of living in the lower classes. There are even those working in the heart of the middle class whose conditions are deteriorating. Angelica Moscovitch is among them – a single mother living with her four children in Beersheba, who says she exemplifies the poor middle class.

"The money, and the air, is gone," Angelica told Ynet. Her monthly income from a full-time job caring for the elderly together with the food subsidies she receives add up to NIS 10,000 ($2,809) before taxes. "The salary is significantly lower than the cost of living which has rapidly risen the last few years," said Angelica.

According to her, she is forced to deal with difficult debts. "In the past they have turned off the gas and water and there were seizures. Right now we are giving up on a lot of things. We don't turn on the heater and simply wear coats inside the house. I cook meat only on the weekend. I'm not even mentioning group activities and new clothes for the little children," told Angelica. Miri and Dov raise three children in Jerusalem and their combined earnings also total NIS 10,000 ($2,809) before taxes. "My salary is minimum wage even though I work a full-time position," explained Miri. "We are fighting for our survival day by day, but the government doesn't even see us." Dov was more critical of Finance Minister Yair Lapid. "It's nice that he cancelled the income tax increase, but where are the child subsidies that he cut? Those hundreds of shekels were our oxygen," he said. 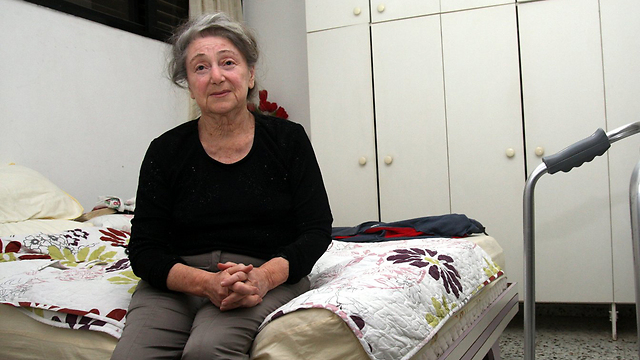 Reba Millstein telling her story (Photo: Roee Idan)
According to Millstein, when she made aliyah 17 years ago from Moldova, where she worked as an engineer at a power station, her late arrival in Israel prevented her from finding work in her profession. "All these years I worked here as a nanny or a maid. I thought you could age with grace but the State won't let us and people like me don't interest anyone," she said.

Representatives of charitable organizations were not surprised by the new data.

"Poverty in Israel is a strategic threat on our existence as a moral society who stands in solidarity and is able to deal with challenges from within and without," said president of the International Fellowship of Christians and Jews, Rabbi Yechiel Eckstein.

"It is incumbent upon the State of Israel to define the minimum income required to live in Israel with dignity…" he added.