Kerry's scheduled visit to Israel to focus on Iran deal

US Secretary of State John Kerry returns to Israel next week, seeking to ease tensions with Israeli Prime Minister Benjamin Netanyahu, who has denounced the nuclear deal with Iran as a "historic mistake."

Kerry will also travel to Ramallah for talks with Palestinian president Mahmud Abbas as he tries to keep delicate Israeli-Palestinian peace negotiations on track, a US official said Wednesday.

The Middle East portion of the December 3-6 trip will come after the globetrotting top US diplomat first attends a meeting of NATO foreign ministers in Brussels on Tuesday, and then travels to Moldova as well. 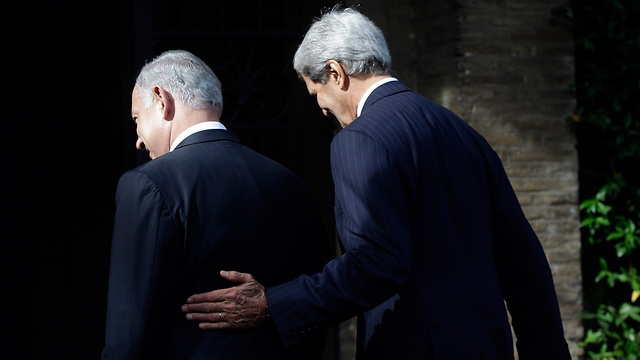 But the toughest leg will be his return to Israel and the West Bank – his eighth overnight visit since becoming secretary of state in February.

Netanyahu has angrily denounced the weekend deal struck in Geneva with Iran, insisting that any deal with Tehran must have the sole purpose of dismantling the Islamic republic's military nuclear capability.

And he is sending his security adviser, Yossi Cohen, to Washington for talks on the details of the six-month interim accord under which Iran will freeze parts of its suspect nuclear program in return for limited sanctions relief.

Tehran has a long history of belligerent statements toward the Jewish state, and Israel – the Middle East's sole if undeclared nuclear power – has repeatedly warned that a nuclear Iran would pose an existential threat.

But the US President Barack Obama's administration has argued that the deal will help ensure the security of the Middle East region as it seeks to nail down a comprehensive settlement with Iran.

US officials have also stressed that Washington remains far from a rapprochement with Iran, as the two countries have not had diplomatic relations for over 30 years.

"Obviously, there remains a distrust with Iran about a range of issues. That hasn't changed, and our relationship on other levels outside of this first step agreement has not changed either," Psaki told reporters.

Kerry had also remained in close contact with the Israeli leadership during the negotiations with Iran, she stressed.

The peace negotiations, relaunched earlier in July after a three-year hiatus, have faltered amid Israeli plans for new settlement building.

The moves have angered the Palestinian negotiation team, which in November presented its resignation to Abbas. But the Palestinian leader has yet to accept them in a move some say is designed to avoid responsibility if the talks collapse.

Kerry last visited Israel and the West Bank in early November, when he held a day of marathon talks with Netanyahu on the peace process.

After visiting Jordan for a day, he then flew back to Tel Aviv for two more hours of talks with the Israeli leader, before heading to Geneva for discussions on Iran.