Iran struck a breakthrough deal with the United States and five other Western powers on Sunday, accepting strict constraints on its nuclear program for the first time in a decade in exchange for partial sanctions relief.

"Regarding the recent development, a great opportunity has emerged for expanding the political and economic ties between Iran and the Emirates and hopefully Tehran and Abu Dhabi will make the most of it," media quoted Rohani as telling visiting Emirati Foreign Minister Sheikh Abdullah bin Zayed Al-Nahayan. 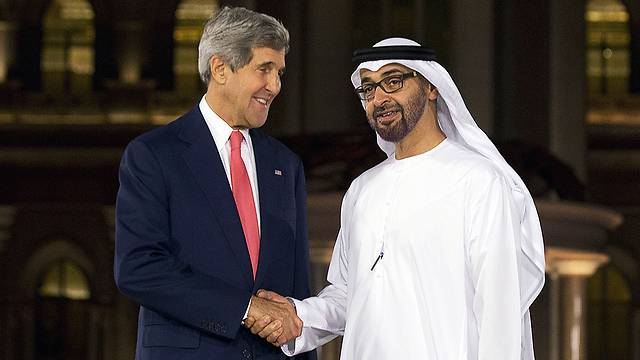 Nahayan said his government was ready to create a joint economic commission "to expand ties in every field, especially in private sector activities with Iran."

The nuclear deal reached after protracted talks in Geneva has "injected fresh air to the whole region", he added.

Both Iran and the United Arab Emirates claim territorial sovereignty over Abu Musa and two other islands in the southern Gulf, an issue that has long weighed on bilateral relations.

Iran, under the rule of the Western-backed shah, gained control of Abu Musa, Lesser Tunb and Greater Tunb in 1971, as Britain granted independence to its Gulf protectorates and withdrew its forces.

Abu Musa, the only inhabited island of the three, was placed under joint administration in a deal with Sharjah, now part of the UAE.

But the UAE government says the Iranians have since taken control of the entire island which controls access to the oil-rich Gulf and installed an airport and military base there.

The Emirates, which host a major Iranian expatriate community, were the first among Gulf nations to welcome the Geneva accord expressing hope that it will contribute to stability in the region. Gulf monarchies, like Western powers, fear that Iran may ultimately develop nuclear weapons under cover of its disputed nuclear program.