Since the ouster of former Egyptian President Mohammed Morsi, female members of the Muslim Brotherhood have moved to the forefront of the groups' activity against what it calls the "military coup."

However now, after the army succeeded in suppressing the pro-Morsi protest movement, loyal female ideologies are refusing to leave center stage. In a new initiative, which finds inspiration from the world of soccer, the sister of the Muslim Brotherhood have formed the Ultras of the Revolutionary Daughters – a group of hardcore women dedicated to saving Egypt from the "coup."

The Ultras of the Revolutionary Daughters derives its name and inspiration from its political rival, Ultras Ahlawy – the ultras fan club of Cairo's Al-Ahly soccer team – which publically protested against the Brotherhood and Morsi's regime. 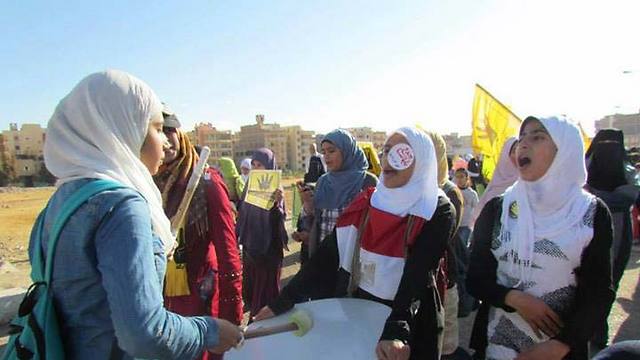 Ultras of the Revolutionary Daughters

The group's Facebook page has already garnered more than 18,000 'likes' and is active in organizing events and demonstrations, as well as articulating the group's agenda for the new government in Cairo.

In the Egyptian political landscape they are somewhat of an odd bird – rarely are veiled religious woman of conservative sentiment seen beating drums, blowing horns and singing like your run of the mill soccer fan.

Aiyah Ala Hossni, one of the Ultras of the Revolutionary Daughters' founders said that "the idea began coming together while protesting against the army. A number of women began to bring drums, while others composted songs and so on. So we told ourselves: 'Why not form an ultras group?' We began on Facebook organizing in groups in areas like Giza and Helwan." 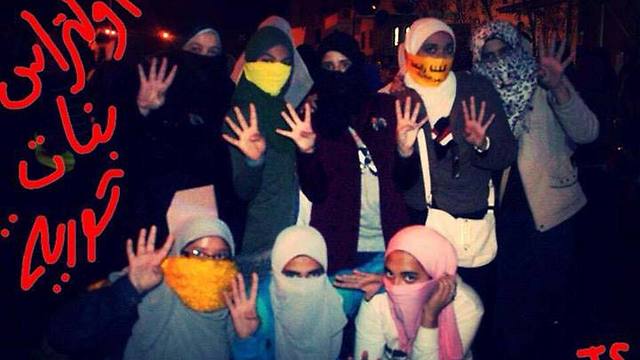 Female Egyptian Ultras
Regarding the rationale behind the group's activity, the Islamist Egyptian activist explained that "during the protests, woman were always behind the men. As a result the women cannot hear the songs, chants and slogans. So we at the ultras decided to put ourselves in the frontline of the protest movement so women can follow us and learn the songs." And what about their male Brotherhood brethren? According to Hossni "a lot of Muslim Brotherhood men criticized our initiative, especially on social media. They think it is not respectable for a women of faith to behave like a soccer fan. I disagree because I think a woman can express her enthusiasm and remain pure. Unlike soccer fans, we do not curse or attack anyone."

In Egypt there are a number of women's groups who came together to protest against the interim government. One such group is a new organization of female students from Al-Azhar University which began holding weekly protests in support of the Muslim Brotherhood.

They also conduct their protests under the cover of a veil but not so much for religious purposes but rather in a bid to prevent university officials from identifying them.

Only this week seven female supporters of the Muslim Brotherhood were sentenced to more than 11 years behind bars by an Alexandria court – seven of which were minors.