Israeli intelligence is seeking proof of Iran violating the interim nuclear deal that was struck last week in Geneva with the world powers, the British Sunday Times reported on Sunday. According to the report, Prime Minister Benjamin Netanyahu instructed Israeli intelligence and Mossad chiefs to seek evidence of Iranian sabotage aimed at bypassing international sanctions and bans, prior to the signing of the accord.

An Israeli intelligence source told the British paper that "Everyone has his own view regarding the Geneva agreement, but it is clear that if a smoking gun is produced, it will tumble like a house of cards."

The paper noted that the emergence of any such evidence will complicate the political challenge faced by US President Barack Obama, in his attempt to persuade the House of Representatives not to increase sanctions on Iran, when politics resume in Washington after the Thanksgiving weekend.

Israeli security sources told the British paper that Israeli intelligence efforts focus on three fields of the Iranian nuclear program: Ballistic missiles, planning of bombs and search after secret nuclear enrichment sites. “Iran would not have invested such a fortune (estimated at $200 billion) if in the end it does not produce nuclear weapons and turn Iran into a regional superpower," the Israeli source told the Times.

The Sunday Times quoted various Israeli and American experts as saying they are not convinced by the Iranian vows to not use the already-enriched uranium in its possession to produce plutonium, which is used for production of nuclear weapon.

In an interview with the Financial Times on Friday, Iranian President Hassan Rohani clarified that his country has no intention of disarming its nuclear facilities. “One hundred percent (no),” he said when asked whether he would concede to the demands of Israel and US hawks. The Iranian president stressed throughout the interview that Iran maintains the right to enrich uranium for peaceful purposes. 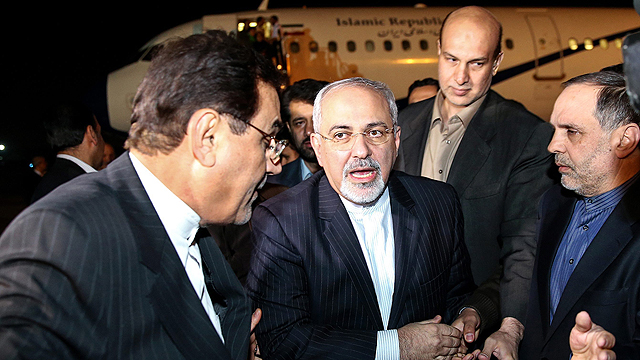 Iranian FM Zarid lands in Tehran after Geneva deal (Photo: EPA)
Iran's foreign minister has stressed that his country would not enter nuclear talks if Israel took part in the talks as well. A Friday report by the IRNA news agency quoted Mohammad Javad Zarif as saying: "We will not attend a meeting in which the occupying regime participates." IRNA did not note where it was claimed Israel would take part in the talks, and according to all estimates Israel is not expected to take part in the negotiations for a final deal, at least not publicly. Meanwhile, Obama is taking heat from home. In an editorial released by the Washington Post on Friday, much criticism was expressed on the interim deal with Iran and the manner in which the White House performed.

The article noted that "the concessions made to Iran will have to be balanced by a major rollback of Iran’s nuclear infrastructure – with no automatic expiration date."

The paper pointed at a contradiction in US Secretary of State John Kerry's remarks, who said that Iran’s assertion of a "right to enrich” uranium would not be recognized in an interim deal, while the text said the “comprehensive solution” will “involve a mutually defined enrichment program with mutually agreed parameters.”