At loggerheads: History of disagreement between Netanyahu, Olmert

Since taking office, PM Netanyahu has been haunted by harsh comments from his predecessor, Ehud Olmert, which have slammed him at every corner – from Iran to peace talks

In response to the harsh words of former-Prime Minister Ehud Olmert, Prime Minister Benjamin Netanyahu reiterated his intention to continue to work to protect Israel's security by blocking Iran from achieving nuclear capabilities. Olmert's comments are the latest in a string of public clashes between Israel's current prime minister and his predecessor.

Speaking at a Hannukah candle-lighting ceremony in Rome's synagogue while on a state visit to Italy, Netanyahu said Sunday that "Unlike others, when I see vital Israeli security interests in danger – I won't shut up. 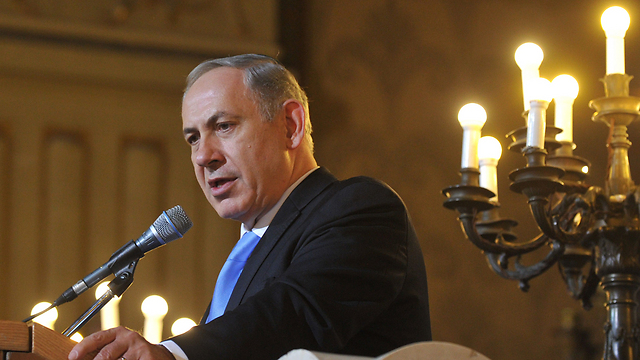 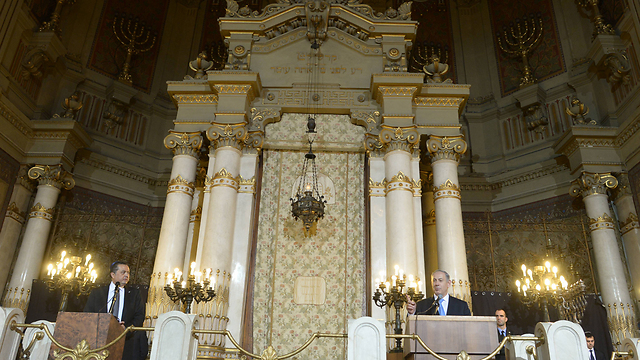 "It's very easy to be quiet and to bow your head, but I have obligations to the security of my people and the future of my State. I am committed to the future of my country, and in contrast to periods in the past, we have a loud and clear voice among the nations and we will make it heard in order to warn – in time – against dangers".

Speaking at a special conference on the Geneva agreement held at the Institute for National Security Studies together with Former Military Intelligence Chief (res.) Major General Amos Yadlin and MK Tzachi Hanegbi (Likud), Olmert said "We have declared war on the US... Will the savior in the Iranian matter be Putin, or Obama?" the former prime minister rhetorically asked, adding "We need to go against the American president? To ask questions, to argue, in closed door decisions, of course." 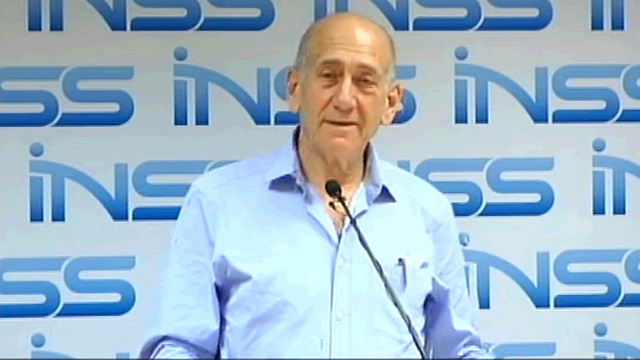 Olmert at INSS (Photo: Haggai Dekel)
Olmert further added that "Until 2009 we managed in silence, after that our policy changed to screams and threats and financial outlays of more than NIS 10 billion ($2.83 billion)."

This is not the first time Olmert has publicly questioned Netanyahu's policy on Iran as well as its cost to the Israeli tax-payer.

In an interview with Channel 2 last January, Olmert suggested that the Netanyahu administration had spent billions on preparations for an attack on Iran's nuclear facilities. At the time Olmert accused Netanyahu of spending NIS 11 billion out of the defense budget on "hallucinatory escapades that will never be realized." "I knew that 2012 was a decisive year and I think there's a surplus in the defense budget which must be cut," the former prime minister said.

Netanyahu said in response, "It's a wild and irresponsible statement. Not one shekel was wasted… We have developed offensive and defensive capabilities in near and distant arenas and I think this investment is very important for the State of Israel, in the same way that the billions spent on the fence stopped the infiltrators. We have enhanced the capabilities of the IDF , the Shin Bet and the Mossad for good reason." Speaking at the annual Jerusalem Post conference in New York last April, Olmert said that the Iranian nuclear program has not been making progress in years, and the extent of the threat has been exaggerated – at the time, a direct attack at Netanyahu's infamous red-line speak at the UN.

At the time the former prime minister noted that when top analysts told Israeli cabinet that "in the year 2008, and at the latest 2009, the Iranians will have a nuclear capacity, we took it very seriously. Now, we are in the middle of 2013 – and they still don't have it." Olmert has also slammed the prime minister in regards to peace talks. Only five days before the national elections, Olmert warned that Netanyahu could cause an irreparable rift between Israel and the US because the government, according to him, was "rejecting peace." At the time Olmert said that "While the American defense budget is facing cuts, (Obama) supports the Iron Dome," referring to the US president's move to release funds for Israel's aerial defense system. "This is a president who says in the middle of a conflict that he won't let Israel lose its advantage. But the Israeli government doesn't think so." The Israeli government, Olmert continued, "rejects peace. It rejects the process and refuses to talk to the moderates on the Palestinian side. It doesn't want an agreement. There's no other way to say it."