During the first stage, the open-air detention center for asylum seekers and 'infiltrators' will take in males only – as was clarified Monday morning during a discussion of the Knesset's Internal Affairs Committee.

Interior Minister Gideon Sa'ar said at the discussion that the new detention facility was not designated for families and that during this stage there was no intention to allow women and children to remain there.

The detention facility will be open during daytime and closed at night, and the asylum seekers staying there must report attendance three times a day. 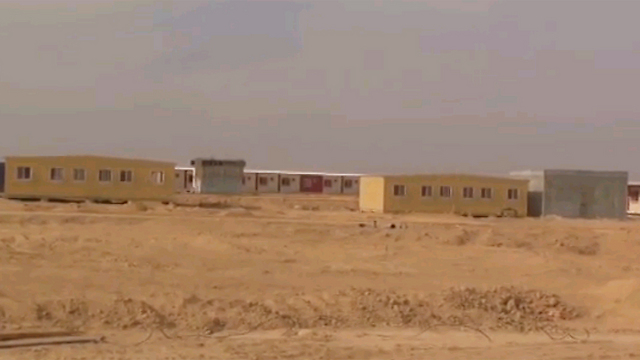 New detention facility in the south

The new facility, near the Saharonim holding facility, will be able to absorb nearly 3,300 persons, with the option for expansion to handle several thousand more in the future. The new center will begin operating in two weeks. The center's operation is anchored in the Infiltrator Prevention Bill.

In September, the High Court for Justice determined that the original wording of the law was unconstitutional, and in recent days the Internal Affairs Committee has discussed several amendments in the new replacement bill which the government formulated in order to pass it through the second and third reading in the coming days.

During Monday morning's discussion the legal advisor to the public security ministry, Yoel Hadar, admitted that he prepared an opinion cautioning that certain elements of the new bill might not pass the High Court's test. Despite the requests of MKs, Hadar refused to reveal the opinion. Instead, he emphasized that the current bill was authorized by the attorney general

According to Hadar, the purpose of the bill is well placed, but there are changes he would recommend: "I would not want to share what I said during internal discussions because the point was for people to express their opinion free of concern. I had a criticism before the attorney general's decision was accepted. But the moment he made the decision, my suggestions were withdrawn."

MK Dov Khenin expressed remorse that the committee did not hear the wide range of opinions that were prepared by the Public Security Ministry: "Hadar's statements attest that he had heavy doubts regarding the constitutionality of the proposed bill. One of the central problems is that the bill creates a holding facility with no time limits under the headline 'open' – but in content it is nothing but a jail."

"The bill does not answer every objection raised by the High Court," he emphasized.

The Knesset's legal advisor, Eyal Yinon, claimed last week that there are still corrections to be made to the proposed law. Interior Minister Sa'ar replied to the objections Monday morning: "The agreement was approved by the attorney general. There are many opinions in this world, and there are many lawyers in the world, and it is their right to think differently."

"In these matters the first and last word goes to the attorney general," he reiterated.

A representative of the transportation ministry said during the discussion that NIS 6 million ($1.7 million) has been budgeted towards operating 16 busses daily from the detention facility to Beersheba and back.

Health Ministry Director Roni Gamzo said that a clinic will be constructed at the facility at the cost of NIS 30 million ($8.5 million). Critical cases will be transported to Soroka University Medical Center in Beersheba.

A representative of the social affairs ministry said the facility will have 10 full-time social workers, at an annual cost of NIS 5 million ($1.4 million).