Israeli schoolchildren's competencies in reading, math and sciences are lower than the OECD average for children in the same age groups, according to the 2012 Program for International Student Assessment (PISA) results, published Tuesday.

The figures comprise the sample of printed and computerized tests that were given to 5,055 students, mostly tenth graders, who are studying in 172 different schools in the country.

According to the data, Israel's results in the reading category were relatively decent in comparison with the OECD average, but the gap was larger in other groupings. The test was divided into a written part, in which Israel came in 40th in math, 33rd in reading and 40th in science. The computerized part saw Israel finish 27th in math and 26th in digital reading. 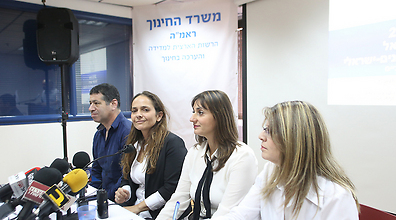 The Education Ministry announces the results of the tests (Yaron Brenner)

The National Authority for Education Surveys and Evaluations, which published the data, said that after being part of the PISA studies for a decade, there has been an improvement in Israeli schoolchildren's achievements. The authority asserted that the positive trend is in all the categories, and it places Israel among the countries that improved the most.

These facts are similar to 2010, however, when Israel joined the OECD. Then, as now, the grades were low compared to other students in the world, but there was a slight improvement in math and reading.

PISA is a triennial international survey, which aims to evaluate education systems worldwide by testing the skills and knowledge of 15-year-old students. To date, students representing more than 70 economies have participated in the assessment.

The percentage of low performers, however, was higher in Israel. In reading 24% in Israel, compared to 17% in the OECD. In math, Israel received 34%, while in the OECD it was 23%. And in science, Israel registered 29% and the OECD average was 18%.

The gap between the top performers and low performers in Israel is one of the highest in the world. There are major gaps between Jews and Arabs, sometimes even at as high as 155 points from a test whose high score is 800.

"We mustn't accept such state of affairs by which someone's place of birth determines his or her place in society," said Hannah Dorsman, who heads an association dedicated to reducing social gaps.

Prof. Anat Zohar with the Hebrew University in Jerusalem said that "for decades, the State of Israel has not been developing the Arab school system as it did the Jewish school system. Fortunately, over the past years things are changing and there's an attempt to bridge the gap, but the gaps are so great it would take a long time to reduce them.