Yeshiva student sentenced to 14 days in military prison for failing to report for duty. Followers of rabbi who advised teen against service demonstrate outside prison

Hundreds of yeshiva students are demonstrating outside Prison 6 in northern Israel in protest of the arrest of an ultra-Orthodox teen who did not heed an enlistment order. The 19-year-old agreed to report to the military induction center for his first mobilization order but has since ignored all other summons. On Tuesday he was tried to 14 days in military prison.

The protest is being led by Rabbi Shmuel Auerbach, head of the Maalot Hatorah Yeshiva in Jerusalem and leader of the Bnei Torah Lithuanian faction. Rabbi Auerbach is known for his fierce rejection of military service.

The teen was following the rabbi's guidelines not to report to the induction center. Rabbi Auerbach and Rabbi Yitzchok Tuvia Weiss, leader of the Eda Haredit faction, met with a rabbi from the teen's yeshiva on Tuesday and issued similar guidelines during the meeting. 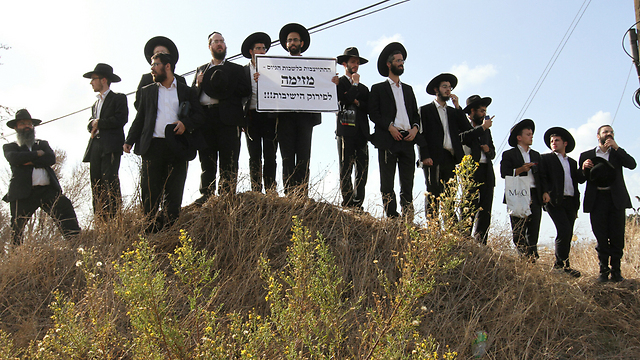 Haredi protest. 'This is the kick-ff' (Photo: Ido Erez)

"For the first time the army has done what it did and this is the obvious response," said Yishaayahu Winn, of the rabbi's associates. "If they change the rules, we have no other choice. Up until now we only wrote articles and voiced our protest. This is the kick-off to a whole new struggle."

A., a friend of the yeshiva student, said he was following Rabbi Auerbach's orders. "My friend was arrested and is in prison through no fault of his own. He not a criminal, he didn't attack anyone. He just did not report for duty because he wanted to study the Torah. Is it against the law to study Torah in Israel?"