VIDEO - The extremely violent, irrational, and terrifying “knockout game” has swept through North America over the last few months. If you’re unfamiliar with this so-called "game," essentially the only rules are that an innocent person is unexpectedly "knocked out," usually with a punch to the face, by a complete stranger on the street.
Different Worlds
From Talmud to Thai kickboxing
Akiva Novick
In the morning, Rabbi Yaakov Lupolianski teaches Torah at Bnei Akiva yeshiva. In the evening, he turns into a tough Muay Thai instructor
From Talmud to Thai kickboxing

The "knockout game" has been affiliated with many hate crimes. In Brooklyn alone, at least eight Jews have fallen victim to an attacker playing the game. While many people in the Jewish community are scared to leave their homes, a local rabbi has another solution: Empower young people to defend themselves.

According to The New York Post, when Rabbi Gary Moskowitz was a child in the Bronx in the 1960s, he was bullied and beat up quite often.

"I wore a yarmulke, and I was a target… I was once dragged up six stories to a rooftop by a gang ... They held me over the ledge," he said. 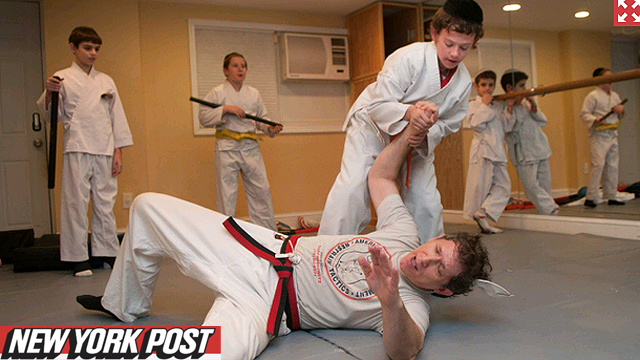 At 14 years of age, Moskowitz attend a summer camp sponsored by the Jewish Defense League where he was taught karate.

Shortly after returning, he encountered a previous bully that had beaten him up and peed on his yarmulke.

"He threw a punch, and it came at me in slow motion. I brought him down," he said. "I could have hit him, but I didn’t. I didn’t have to. It was like angels were singing."

In the early 1980s, Moskowitz became a cop, helping to defend the streets of New York. These days, he is an Orthodox rabbi who teaches self-defense at a dojo in Flushing.

Moskowitz is now using his influence within the community to encourage young Jewish people to fight back, just as he did as a teenager.

"If Jewish kids started fighting back, they wouldn’t get picked on so much," said Moskowitz, a seventh-degree karate black belt. "I’m just trying to encourage the Jewish community to do that."