Iran joins choir of those blaming Israel for death of senior Hezbollah operative. Iranian envoy says, al-Laqqis was killed for 'teaching Zionists lessons, supporting Palestinian cause,' promised his death 'would only make resistance determined to achieve goal of eliminating Israel'

As the slain senior Hezbollah official was laid to rest Wednesday, Iran joined in the chorus of those blaming Israel for his premature death.

Hassan al-Laqqis, a senior Hezbollah operative, was killed overnight in Beirut’s Hadath suburb after unknown gunmen opened fire on him while he was entering his vehicle. Though no further details have been confirmed, Hezbollah, and now Iran, have pointed a blaming finger at Israel.

With Hezbollah flags waving, al-Laqqis was buried in his birth town of Baalbek. People carried images of his likeness – as well as those of Hezbollah Secretary-General Hassan Nasrallah and Iranian Supreme leader Ayatollah Ali Khamenei – as his funeral procession moved forward to the sounds of gun shots from the Khomeini Cultural Center to a local cemetery. 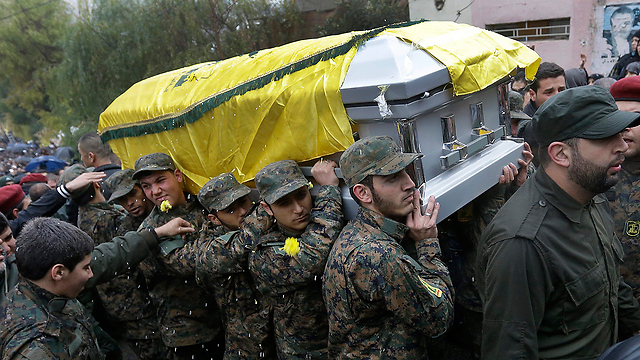 Al-Laqqis funeral. Baalbek (Photo: AP)
Iranian Ambassador to Lebanon Ghazanfar Roknabadi condemned that attack in a condolence letter sent to Hezbollah's Narallah “I offer my condolences... over the martyrdom of brother Hassan al-Laqqis who had a long history of teaching the Zionist enemy harsh lessons in humiliation and whose actions were heroic acts in the face of (Israel)."

The envoy moved on to praise al-Laqqis for his commitment to the resistance, and blamed Israel for his death: "While we adjoin this heroic martyr to the convoy of martyrs who sacrificed their lives to serve their nation and its sacred cause, mainly the Palestinian cause, we believe that these cowardly acts by the Zionist enemy and its agents would only make the resistance more determined to achieve its goals of eliminating (Israel) from existence," Lebanon's Daily Star reported. 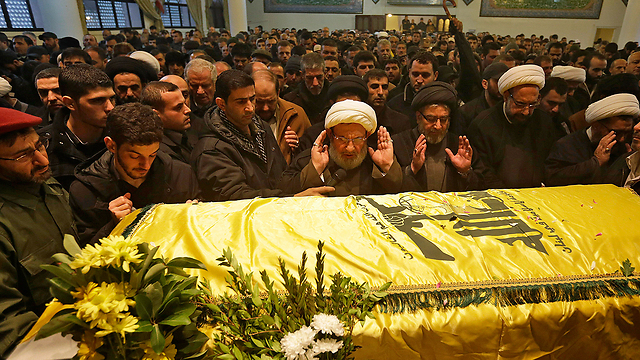 According to the Daily Star, al-Laqqis played a central role in developing the terrorist organization's technological abilities, a sources close to Hezbollah reportedly told The Daily Star on condition of anonymity Wednesday.

“Lakkis was involved in scientific development and played a key role in developing Hezbollah’s unmanned aerial vehicles program,” the paper quoted the source as saying, adding that in his opinion al-Laqqis was clearly on “Israel’s top 50 most wanted list.”

The paper further quoted a security source who said Lakkis was also in charge of smuggling arms to Gaza and Egypt. 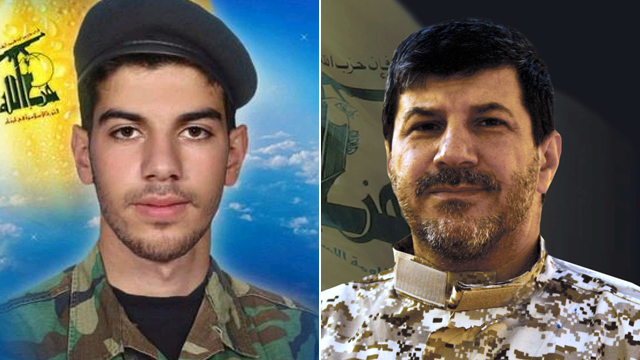 al-Laqqis with son who was killed in Second Lebanon War (Photo: AFP)

A Lebanon source close to Hezbollah said al-Laqqis had recently taken part in several battles inside Syria. The source further said that the attack bore the hallmarks of an Israeli operation, being shot from close range by a silenced gun as he arrived home at around midnight, and analyst Charles Lister of IHS Jane's in London said it suggested an element of "professionalism and prior intelligence".

According to the Lebanon Now website, al-Laqqis also headed Hezbollah's technology and communications unit and played a key role in restoring the group's communication array after the Second Lebanon War.

Referring to Israel, Hezbollah said in a statement, "This enemy must shoulder complete responsibility and repercussions for this ugly crime and its repeated targeting of leaders and cadres of the resistance."

The group said al-Laqqis was a "jihadist and a father of a martyr who was killed in 2006 in the Second Lebanon War."

According to Lebanese security officials, al-Laqqis was in his car at his building's driveway when assassins fired five shots at him. He was rushed to a nearby hospital where he died of his wounds.

A source close to Hezbollah's secretary general said al-Laqqis was very close to Hassan Nasrallah. It was further noted that he was killed not long after Nasrallah's televised speech.

Foreign reports suggest that he was at one point in charge of Hezbollah's rocket arsenal, advanced weapons and military procurement.

The Lebanese group waged an insurgency against the nearly 20-year Israeli military occupation of southern Lebanon before Israel withdrew in 2000.

The Israelis have been suspected of killing high-ranking Hezbollah figures for decades. In 1992, Israeli helicopter gunships ambushed the motorcade of Hezbollah leader Sheik Abbas Musawi, killing him, his wife, his son and four bodyguards. Eight years earlier, Hezbollah leader Sheik Ragheb Harb was killed in south Lebanon. But one of the biggest blows came in 2008 when Imad Mughniyeh, a top Hezbollah commander, was killed by a bombing in Damascus.

The Saudi Arabia is too suspected to stand behind the assassination of the Hezbollah key figure. Al-Laqqis' killing came shortly after Hezbollah leader Hassan Nasrallah, speaking to a TV station, accused Saudi Arabia of being behind the Nov. 19 suicide bombings at the Iranian Embassy in Beirut. He indirectly blamed an alliance between Iran rivals Israel and Saudi Arabia for trying to strike at Hezbollah, which is Tehran's proxy in Lebanon.

Additional culprits could be al-Qaeda-linked groups, as Sunni extremists linked to al-Qaeda are staunch opponents of Hezbollah. One such Lebanese group, the Abdullah Azzam Brigades, claimed responsibility for the Iranian Embassy attack and said more would follow unless Hezbollah withdrew its fighters from Syria.

Syrian rebels have also been threatening Hezbollah since the group sent fighters to Syria. Two previously unknown Sunni groups claimed responsibility for al-Laqqis' assassination, although the claims could not be verified. Since Hezbollah's intervention in Syria began, its strongholds have been targeted by rockets and car bombings in apparent retaliation.