Body of man from Texas arrives at hospital with gunshot wounds. Security officials say American was jogging near consulate, site of terror attack in 2012 that killed ambassador

Unknown assailants shot an American teacher to death as he was jogging on Thursday in Benghazi, a hospital official said, underlining persistently tenuous security in the eastern Libyan city where the US ambassador was killed last year.

Fadyah al-Burghathi, spokeswoman for the Al-Galaa hospital, said the body of a man from Texas was brought to the hospital on Thursday with gunshot wounds. A security official said the American taught chemistry at the city's International School, a Libyan-owned institute that follows an American curriculum.

No one has claimed responsibility for the teacher's killing but suspicion is likely to fall on Islamic terrorists active in the city. 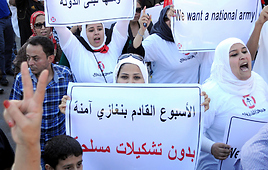 The security official, Ibrahim al-Sharaa, said the American was jogging near the US Consulate, where the US ambassador and three other Americans were killed by Islamic terrorists in September 2012.

The American was one of four people killed in Benghazi today and whose bodies were taken to the Al-Galaa hospital, showing the dangers of a city that is home to numerous armed groups resisting the central government's authority. The other three were military personnel.

Libya's heavily armed militias, with roots in the 2011 war against dictator Moammar Gadhafi, have proliferated since his overthrow. They have since undermined successive transitional governments and parliament.

Libyan security forces clashed in Benghazi last month with Ansar al-Shariah, a hard-line Islamist militia blamed for the consulate attack. Ansar al-Shariah faces a backlash from residents who have marched against it both in Benghazi and, in recent days, in its stronghold in the eastern city of Darna.