Massive free open online courses attract scholars from all across the world, even from countries that do not recognize Israel. 'Our belief is that it's the right thing to do,' says school's manager, 'In my eyes, it's a revolution'

Earlier this year, the Open University joined the international project of distant-learning, MOOCs, massive open online courses, which draw students from around the globe, including Lebanon, Egypt, Jordan and even Sudan.

One of the program's students is Najud Hassan, a resident of Khartoum, the Sudanese capital. When asked whether taking a course in an Israeli university would be looked upon as acceptable in her country, Hassan said that she does not think that there will be any criticism in all that is related to studying and knowledge." She quoted a Muslim saying, "Ask for knowledge, even in Chinese," and stressed to have a strong belief in the significance of acquiring knowledge.

She reached the Open University's website just by surfing the web. She signed up for the course, was accepted, and started learning educational psychology in Arabic. "I chose an Israeli university because of the variety of languages it offered," she said. "Other than that, I'm aware of the strength of the Israeli teaching and learning methods, which I wanted to become familiar with. Also, the Open University offered a course that I've wanted to take ever since I was a child. It's a course that will help me raise my children." 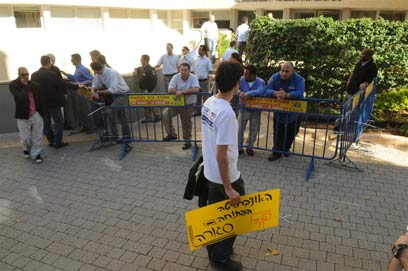 The Open University on strike in 2009 (Photo: Yaron Brenner)

Hassan is not a new student. She studied literature at Khartoum's university, received a Master's degree from a Moscow university, and now is studying for a PhD in archeology. "Studies in Sudan are intense and hard, and there's a lot of competition to get accepted," she said. "The studies in Israel are also intense and great.

"My professor is Ibrahim Jabar. Like all other professors in the world he presents the information in a simple manner, and gives opportunities for discussions and open dialogue. He has very enjoyable lectures. He asks questions that make the students explain down to the last detail how well they understand the material."

There are 2,000 participants from across the world who have already signed up for the Open University's courses. These are online, free courses for anyone who wishes to study. The courses are taught through learning packages, which include two to four video lectures each week, online books, essays, presentations, tests and papers. Credits cannot be used towards an academic degree. The Open University is the first institution in the country that is offering the courses, and it is the only school in the world that does so in four languages: Hebrew, English, Arabic and Russian. Currently, the university offers one course in each of the languages: The Middle East Today, in Hebrew; Educational Psychology, in Arabic; Jewish-Christian Relations from the Middle Ages until Today, in Russian; and Genocide, in English. "It's one of the hottest trends today in education, because all of a sudden it's free and open to the public," said Yoram Kalman, the director of international academic initiatives at the Open University. "The students can study as they like, the university doesn't tell them how to work. The goal is to create interest among those who wish to broaden their horizons, and to let those who don't have the financial capabilities to study in a university. In my eyes, it's a revolution."

The enemy's method of learning

Hairallah Sabih, a Jordanian teacher, also happened upon the learning project. But he's careful about the connection to Israel. "This isn’t rapprochement. I don't recognize the existence of the enemy Israel. I am certain that the professors are Arab-Israelis, because their Arabic is very good."

How do you rate the level of Israeli teaching?

I am not up to date on the enemy's teaching methods. Jordan is one of the most advanced countries in education, and the whole world knows that.

So why did you decide to study at an Israeli university?

I didn't choose the university, I chose the subject. What made me sign up was the psychology course, which interested me.

And what is your relation with the professor?

I participate only once or twice a week, and the professor only answers specific questions.

Kalman refused to become agitated over Sabih's negative tone. "Our belief is that it's the right thing to do. It doesn't matter who's sitting on the other side of the screen," he said. "I believe that at the end of the day this will bring a certain affinity. Ignorance is definitely not the answer, and the fact that education and knowledge are becoming international is important. I don't expect for them to say that the Israeli university lets us participate in courses, so therefore the Israelis are great, but this is one step forward. Education and familiarity will turn the world into a better place in the long run."