Opposition activists again accused President Bashar Assad's forces of using poison gas in Syria's civil war on Thursday, and said victims had been discovered with swollen limbs and foaming at the mouth.

The activists told Reuters two shells loaded with gas hit a rebel-held area in the town of Nabak, 68 km northeast of Damascus, on a major highway in the Qalamoun region. They reported seven casualties.

"We have documented nine casualties from poison gas used by the regime in neighborhoods of Nabak," it said on its Facebook page.

Amir Kazk, another activist in Nabak, said the two shells were part of a heavy barrage that hit the Tariq al-Mashfa district near the centre of the town. The source of the fire, he added, appeared to be an army barracks on a hill in the nearby Deir Attiya area.

Video footage posted on YouTube by activists showed a man who said he had seen white smoke from the shelling, inhaled it and then passed out. Reuters cannot confirm its authenticity.

A nerve gas attack killed hundreds of people in rebel-held neighborhoods on the edge of Damascus on August 21. Each side blamed the other. 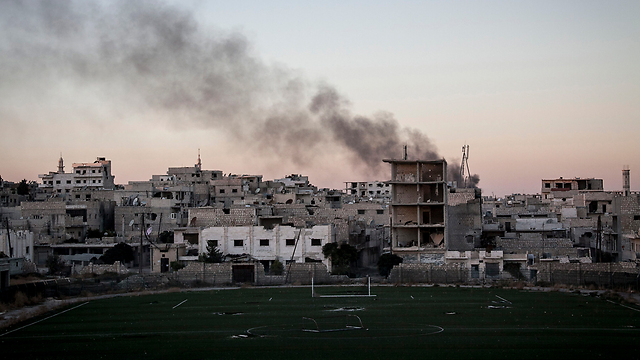 Assad subsequently agreed to give up his chemical weapons arsenal under a deal struck between Moscow and Washington that averted a US attack on Damascus, and international inspectors have begun work on dismantling Syria's chemical weapons facilities.

Opposition groups have accused Assad's forces of using chemical weapons several times before and since the August 21 incident.

Reuters cannot verify reports in Syria due to reporting restrictions. It was not clear what kind of gas, if any, might have been used in Nabak and there was no immediate comment from Syrian authorities.

"Seven men are reported ill so far. They have swollen limbs and foam coming out of their mouths," said an activist calling himself Amer al-Qalamouni.

"No doctors have got to them yet because Nabak is under ferocious bombardment and there are very few medical staff left."

Syrian forces have used a range of weapons in the civil war, including cluster bombs, incendiary bombs and improvised explosives. Rebels have also made their own weaponry.