Obama on Iran: We prefer diplomacy, but all options on table

US president addresses issues of nuclear Iran, Israel-PA peace talks in annual Saban Forum, reiterates stance that Israel's security is important to US, expresses hope that diplomacy with Iran would yield results, that two-state solution would be achieved

Addressing the issue of nuclear Iran, Obama said: "What we do have to test is the possibility that we can resolve this issue diplomatically."

"Iran cannot... will not advance its (nuclear) program," the US president noted.

He added that Iran is engaging in other activities that are "detrimental to the United States." 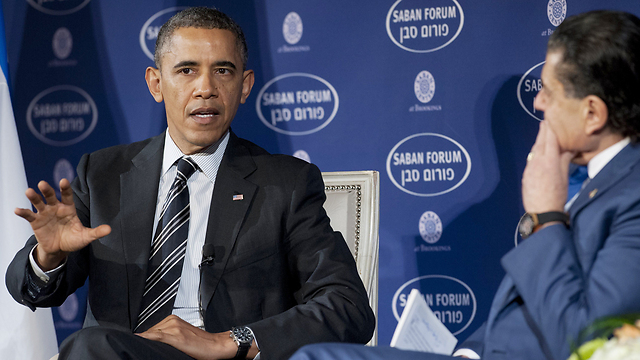 Obama at the event (Photo: AFP)

"But I want to make sure everybody understands it – that particular option is not available, so as a consequence, what we have to do is make a decision as to given the options available what is the best way for us to assure Iran does not get a nuclear weapon?"

"One can envision an ideal world in which Iran said 'we will destroy every element or facility and you name it it is all gone.'"

But he said: "I think we have to be more realistic and ask ourselves what puts us in a strong position to assure ourselves that Iran is not having a nuclear weapon."

The president also acknowledged some tactical differences with Prime Minister Benjamin Netanyahu, but said the US and Israeli bottom-line goals are the same.

"Now, you'll hear arguments including potentially from the (Israeli Prime Minister Benjamin Netanyahu) that says we can't accept any enrichment on Iranian soil, period, full stop, end of conversation," Obama said, "But ... I think we have to be more realistic." 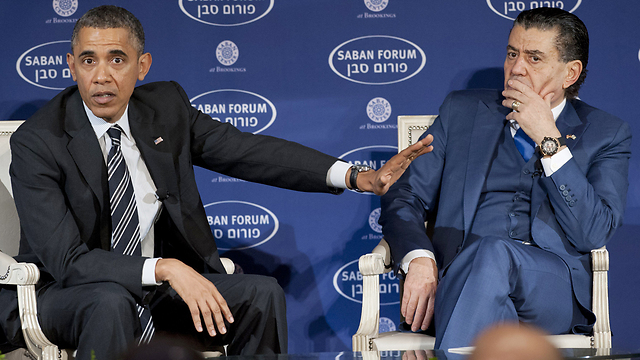 "It is my strong belief that we can envision an end state that gives us an assurance that even if they have some modest enrichment capability, it is so constrained, and the inspections intrusive that they as a practical matter do not have breakout capacity."

According to Obama, the US respects Israel's efforts to maintain its defense.

Regarding the issue of negotiations between Israel and the Palestinian Authority, President Obama said that the United States had concluded it was possible for a two-state Middle East peace solution to include sufficient guarantees to preserve Israeli security.

Obama said the determination had been made by the US special envoy on security, General John Allen, who has been briefing Israeli Prime Minister Benjamin Netanyahu on possible security arrangements following any final peace deal.

"He has arrived at the conclusion that it is possible to create a two-state solution that preserves Israel's core security needs," Obama said at the Brookings Institution's Saban Forum in Washington.

"That's his conclusion, but ultimately he's not the decision maker here, Prime Minister Netanyahu and the Israeli military and intelligence folks have to make that determination."

"And I think that we're now at a place where we can achieve a two-state solution in which Israelis and Palestinians are living side-by-side in peace and security," Obama added.

Allen, who has been working with Secretary of State John Kerry on his Middle East peace push, briefed Netanyahu Thursday.

Obama also warned that, in the event of a final agreement, the Palestinians would have to accept Israel would require a "transition period" to ensure that the West Bank did not become a security threat akin to Hamas-ruled Gaza.

"This transition period requires some restraint on the part of the Palestinians as well. They don't get everything they want on day one," he said.

Lieberman made headlines Friday night at the forum when he said there is no chance of reaching an agreement with the Palestinians: "We are at a dead end."

The minister added, "There may have been something dramatic that I don't know about. My feeling is that there is great desire but I don't think it's possible. It is not easy to bridge the gaps. We are not even close to a deal, not even an interim one. That is my estimate."