Palestinians: US ideas for security will lead to 'total failure' of talks

Senior PLO official slams US secretary of state's suggestions for Israel's security, claiming Kerry 'only wants to win over the Israelis and allow settlement expansion at our expense'

US proposals for Israel's security presented by Secretary of State John Kerry will lead to the "total failure" of peace talks with Israel, a senior Palestinian official told AFP on Monday. "These ideas will drive Kerry's efforts to an impasse and to total failure because he is treating our issues with a high degree of indifference," said Yasser Abed Rabbo, a top official with the Palestine Liberation Organization, referring to the US diplomat's proposals on future security arrangements in the Jordan Valley.

"(Kerry) only wants to win over the Israelis and (allow) settlement expansion at our expense, under the guise of Israel's security by placing the Jordan Valley under Israeli control." Abed Rabbo charged.

"There is also talk of a framework agreement," said Abed Rabbo, secretary general of the Executive Committee of the Organization for the Liberation of Palestine (PLO).

"Who said we wanted a framework agreement? We want complete independence and to resolve all final status issues, under the (previous) agreements and international law," he said, noting that Kerry is committed reaching a final agreement. 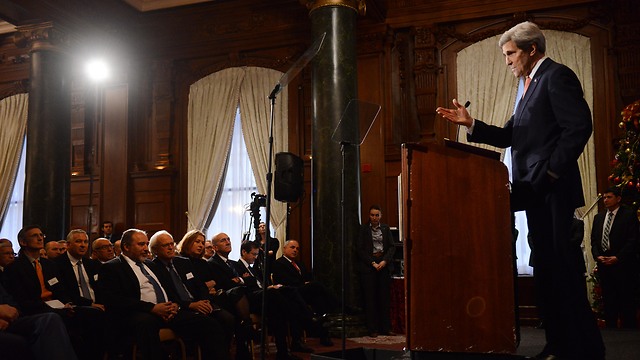 His remarks were made just days after Kerry's latest visit to the region, which focused squarely on Israel's security needs in any future peace deal.

Proposals laid out by Kerry and his security adviser General John Allen were reportedly welcomed by the Israelis but were coldly dismissed by the Palestinians, with one official describing them as "very bad ideas which we cannot accept". Acknowledging Israel's concerns that handing over territory to form part of a Palestinian state could make it vulnerable to attack, Kerry said at the time he had offered Prime Minister Benjamin Netanyahu "some thoughts about that particular security challenge" but did not elaborate. Commentators said the proposals would allow Israel to maintain a military presence in the Jordan Valley, which runs down the eastern flank of the West Bank, a move completely rejected by the Palestinians. Israel currently has military control of the West Bank and does not want to give it up. But a possible part of the US plan could call for stationing international forces along the West Bank border with Jordan, although officials on all sides have refused to discuss the details.

It's also possible that Israel would be in control of the international forces, in an uneasy compromise to try to appease both sides.

“He is helping us make sure that the border on the Jordan River will be as strong as any in the world, so that there will be no question about the security of the citizens, Israelis and Palestinians, living to the west of it,” Kerry said.

“Never before has the United States conducted such an in-depth analysis of Israel’s security requirements that arise from a two-state solution,” Kerry said.

Also speaking at the Saban Forum, US President Barack Obama said that he and Allen had spoken and agreed that “that it was possible to create a two-state solution that preserves Israel’s core security needs.”

But Obama noted: “That’s his conclusion, but ultimately he’s not the decision-maker here, Prime Minister Netanyahu and the Israeli military and intelligence folks have to make that determination.”

Kerry said more than 160 US experts were coordinating with the Palestinians and the Jordanians as well as Israelis and running multiple scenarios, including future border issues and terrorism, to pinpoint Israel’s needs.

He described the process as a “critical threading of the needle that needs to happen. What we put on the table is deadly serious, real.”