Public Security Minister intends to release immigrants during daytime, but most regulations are similar to detention under house arrest. First 400 of 9,000 infiltrators expected to be held in facility to be admitted this weekend

The Holot facility for illegal migrants is expected to open this coming week in Ktziot, in the area of Holot Halutza, south of the Gaza Strip. However, plans for launch are shadowed by harsh critique from politicians and human rights organizations.

According to earlier expectations of authorities, an estimated 400 migrant workers are expected to be admitted to the facility on Thursday. They will need to report their attendance three times a day –  morning, noon and night – and to return to the facility at night time, as is customary with detainees under house arrest.

Migrants could leave the facility during the daytime using public transport services, or by using designated buses authorized by the Transport Ministry.

These guidelines, along with the compound's isolation from highly-populated areas, raise great doubts regarding the designation of the facility as "open." 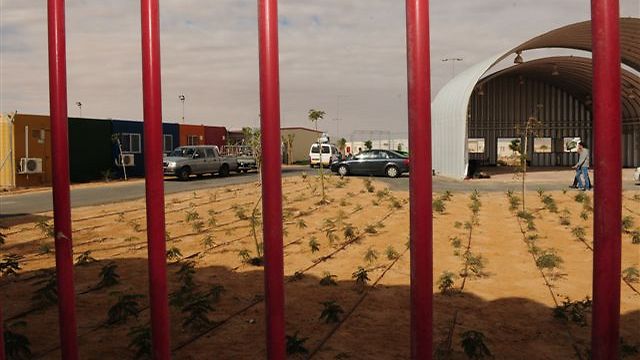 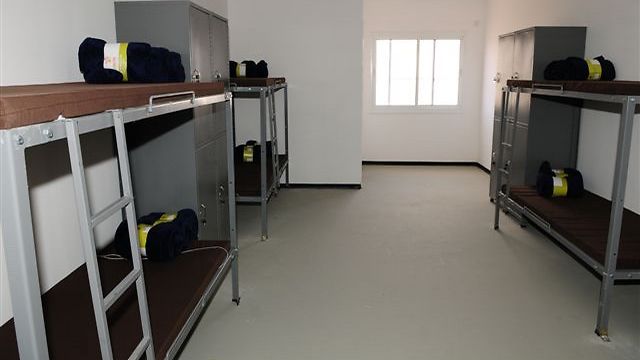 The facility, and each of its wings, is surrounded by iron fences and barbed wires that are "meant to protect the security of migrant workers", according to authorities.

Each wing has 14 rooms and each room has five bunk beds, a shower and a bathroom. The mess hall, culture center, shelter, laundry rooms, basketball court and public telephones are located in public areas, along with classrooms and vocational training centers.

Every resident in the facility will get 500 shekels per month, and some will work in the facility in exchange for pay. The Ministry of Public Security is working to find jobs for migrants outside of the facility, but their move was met with resistance by the Interior Ministry. 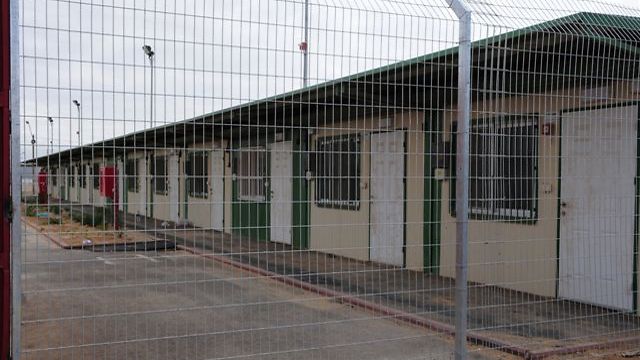 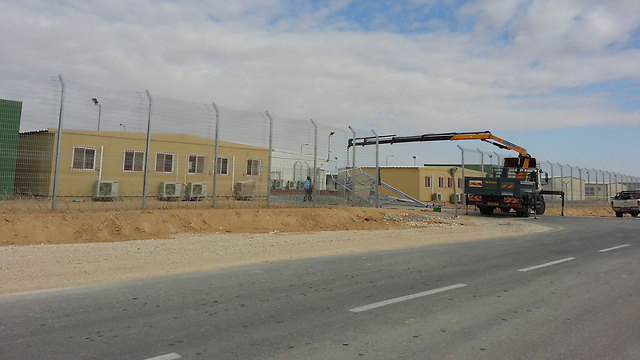 Some 140 officers and wardens from the prison service will secure the facility, equipped with cameras and a control room, along with a police station and fire department.

According to authorities, a violation of the site's regulations will result in a transfer to "Saharonim", the near-by closed detention facility.

"We are convinced that petitions opposing the conditions of migrant workers will be filed to the High Court", Public Security Minister Yitzhak Aharonovitz said. "Whatever the Court decides; we will abide by that".

During a tour at the facility, in the presence of Prison Commissioner Aharon Franko, Aharonovitz said: "Our hope is that the detainees will not stay in the facility during daytime and that their stay here is with accordance to the law. We try to provide them with a normal life, employment, studies and training."

Human rights organizations whose petitions against the previous amendment made to the law to prevent infiltration brought to its revocation by High Court judges intend to appeal very soon against the alternative amendment approved by the Knesset.

The organizations, including the Association for Civil Rights, a hotline for Migrant workers and Assaf – the Organization for Refugees and Asylum Seekers in Israel – said that "the approval of the new amendment, which is worse from the one that was rejected by the High Court, is a disgrace to Israeli democracy and signifies a debasement of both the High Court and the rule of law.

"The detention of 3,000 out of 50,000 asylum seekers in Israel, without judicial review or a time limit, is not only draconian, undemocratic and a critical violation of human rights, but it will also not be of any help to residents of south Tel Aviv."