In additional case of discriminatory practices, Yesh Atid MK Pnina Tamano-Shata barred from donating blood because she has "special kind of Jewish-Ethiopian blood"

The staff then told her that she could donate blood, but her donation would be frozen, not used. In the past, the MDA's refusal to use blood donated from resident of Ethiopian descent has inspired claims of racism, the MDA in response claim they are only trying to minimize risks to blood recipients.

President Shimon Peres expressed disgust at the incident.  "There can be no differentiation between one blood and the other in the State of Israel. All citizens are equal. We need to write new directives and to allow every Israeli citizen to donate blood. The Ethiopian people are precious to the State of Israel. They are salt of the earth," Peres said.

Tamano-Shata arrived Wednesday afternoon to donate blood in a special donation center opened at the Knesset. After being refused and told she had "the special kind of Jewish-Ethiopian blood," Tamano-Shato tried to explain that she has been living in Israel since the age of three, and has served in the IDF. 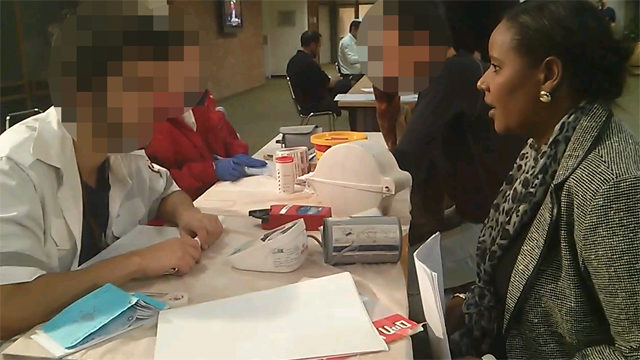 Tamano-Shata at MDA station
She was sent to speak with the MDA donation teams' supervisor. Tamano-Shata told her "you're the professional, check if I fit the criteria" for Jews of Ethiopian decent which are allowed to donate blood. After an additional examination, she was informed that she cannot donate blood. After pushing the matter further, Tamano-Shato was informed she could donate but that her blood would be frozen and not used. In response, she told the MDA: "I'm good enough to serve the country in the Knesset, but for some reason, to donate blood, I'm not good enough… this is insulting." The supervisor responded by saying "sweetheart, don't be insulted, your're right but these are the Health Ministry's directives." A man present at the scene, told Tamano-Shato as she was exiting, "what can you expect, this is a racist country." Aides close to Tamano-Shata said the incident was very insulting and embarrassing for her, as the MDA policy is already a loaded issue for the Knesset member.

In her youth, the young Yesh Atid MK led protests against the MDA practice of disposing of blood donated by Ethiopians.

Tamano-Shata further said "it is sad that after so many decades the State has failed to stop differentiating between blood and blood. This is a shameful experience that has been haunting me since I was 16 and I can only hope that the Health Minister (Yael German, also from Yesh Atid) will change the situation."

Tamano-Shata was 16 when the MDA practice was first reported and later, when it reared it head again in 2006, she led the struggle against the discriminatory practice. Prime Minister Benjamin Netanyahu called MK Tamano-Shata (Yesh Atid) to express his admiration of her work after Ynet exposed the story.

During the conversation the prime minister said there must be an examination into the directives that prompted the incident.

Knesset Director-General, Ronen Plot, has ordered representatives of to leave the Knesset grounds and remove the blood donation stand. It was further determined that the Knesset's Interior Affairs Committee will hold an urgent discussion on the subject next Wednesday.

Health Minister Yael German said in response: "I find it absurd that in Israel of 2013, people of Ethiopian descent that came to Israel over 25 years ago, can still not donate blood."

German added that "from the moment that I assumed office, I have been having discussions with Ministry of Health professionals and the blood services in order to change and bring an end to this absurd situation. I intend to hold a discussion open to the public, in which professional opinions from global authorities will be presented, and will accordingly change the criteria that determines eligibility for blood donation, in a manner that will protect both the donors' dignity and the health of the person accepting the transfusion."

Prof. Eilat Shinar, MDA's director of Blood Services, said in response that "the regulations of the Ministry of Health do not allow the use of a blood infusion from someone who was born or lived for more than a year in a HIV-prevalent country since 1977, including countries in Africa, Southeast Asia and the Caribbean islands.

"Those individuals who still want to donate may do so, but the transfusion will not be used, as it is forbidden. There are people, among them people of Ethiopian descent, who have their own reasons for donating, and they take into account that their stock will not be used."

MK Ahmed Tibi, (Raam-Taal) joined the condemnation. "This is a disgraceful, racist decision. The Israeli society and its systems continue to be infected by the deadly virus of racism, aimed at times against Ethiopians and many other times against Arabs. Racism is racism is racism. I feel solidarity with MK Tamano-Shata."

"I hope that some good may come from this horrible offense done to you today. Your private incident will bring about reparations for the injustice done to Ethiopians and to a repeal of these racist and shameful directives," said Livnat.

He added, "It is not right that, because of one's lineage – without any screening – a certain ethnicity or nationality will be prevented from donating blood. I call on the health minister to correct the related directives immediately."