Seniors struggle to pay for heating amid extreme storm

Elderly citizens sway back and forth with important decision: Buy food or heat house? Foundations give out blankets, sweaters to needy, but Israel still ranks highest in elders under poverty line

Dr. Valentine Akabson lives by himself in a small rented apartment in an old and partly damaged building. The windows are not sealed or insulated, and on Wednesday, when it was 14 degrees Celsius outside, Akabson, 83, childless senior with a disability, did not turn on his heater, even at the peak of the storm, seeing as he cannot afford the electricity bills.

“Maybe for a few minutes before I go to sleep,” he said apologetically. “I sit at home everyday with enough coats as if I was outside.”

Akabson squints when hearing the International Fellowship of Christians and Jews’ latest statistic. Around 20% of Israel’s seniors are forced to give up on heating their houses because of dire economic problems. 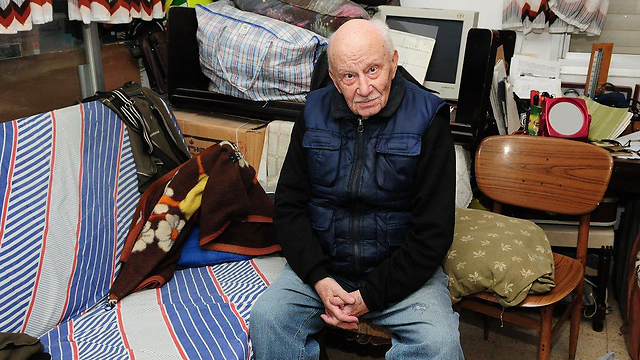 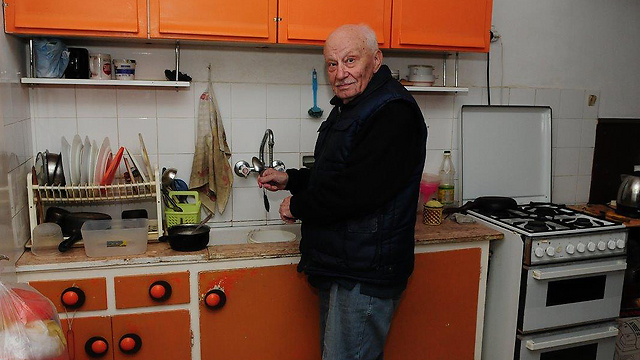 “The cold and the loneliness kill,” Akabson said. The poverty is something that he deals with all the time, but in weather like this, the feeling of scarcity only becomes greater.

Akabson immigrated to Israel in 2002 after his wife passed away. He suffers from lung and heart disease, and a caregiver comes to his house five times a week for four hours each time to help him bathe, cook and clean. “I was always strong," he noted, "and I still am today. I try to move things around the house as long as I can. If I stop – I’ll die.”

Without pension, the senior survives on a NIS 2,800 stipend, as well as a NIS 1,000 allowance for rent. “I’m barely living. I don’t have a social life and I don’t celebrate holidays,” he said. “I always have a dilemma what to buy: Food or medicine. The stipend doesn’t cover everything. When will someone help me? Have we’ve been sentenced to death before anyone will come help us?”

'They’re going to cut the electricity'

As part of the preparations for the storm, the Foundation for the Benefit of Holocaust Victims in Israel gives out blankets, sweaters, and other equipment to stay warm to Holocaust victims who are needy throughout the country.

The president of the Fellowship of Christians and Jews, Rabbi Yechiel Eckstein, is certain that the State of Israel and its leaders need to be ashamed of how many seniors there are in the country who need to choose between heating their apartment and buying food and medicine. He said that the old-age and supplemental salary stipends barely cover half of the seniors’ basic expenses, and this is at a time where the price of living continues to rise.

“Israel’s government must match the stipends with the price of living, so that seniors who are completely dependent on those stipends will not only be able to survive but to live respectfully,” he said. “Our fellowship does the best that it can to help improve the situation of tens of thousands of seniors, but the ultimate responsibility for their welfare and to supply basic needs for the helpless and hopeless is the State. As of today, seniors are near the bottom of the government and the National Insurance Institute’s list.”

Ephraim, whose name was changed for the article, is a 78-year-old Holocaust survivor who lives in Tel Aviv. He said that the rain makes it very difficult for him to live in house.” “I’ve been renting this one-room apartment for 11 years, but it’s an apartment that’s not really livable. I’m here by myself, with the cat. The walls and ceiling are cracked, and you can see the sky through them. There are leaks all year round, and there are things falling from the ceiling.”

Galit Ben Yakar, 63, and her husband Aharon, 65, live in public housing in Dimona. “I received an independent, pre-paid electricity meter, and as of now, I only have two numbers left on the meter and then they’ll disconnect my electricity, Galit said.

Galit said that almost all the food is gone. There are only a few chicken thighs that she received. Their stipend is very little for them, she said, and every Monday and Thursday the National Insurance Institute finds them another debt to pay.

“At one time they (the National Insurance Institute) said we owed NIS 49,000, but they couldn’t tell me for what, so they gave up on it. The institute then said I wasn’t eligible to receive guaranteed income, and because of that I couldn’t get a discount on electricity to heat the house,” she said. “I got a heater as a donation, but it uses a lot of electricity.”

The Electricity Company issued a statement regarding the Ben Yakars’ electricity. “The Electricity Company didn’t cut off Galit ben Yakar’s electricity. This is a pre-paid electricity meter, which has no more credit loaded on it. We will supply additional credit until the storm is over. CEO Eli Glickman instructed the company not to disconnect electricity until the stormy weather is over. As well, in order to prevent customers not having electricity during extreme weather, the Company in the Dan Region reconnected 32 apartments and contacted them by telephone to say that this was a goodwill gesture, and that on Sunday the Company will call again to go over details on how the customers will pay their debts.”

The International Fellowship of Christians and Jews is looking for volunteers to work with seniors in Jerusalem, Arad, Dimona, Beersheba, Sderot, Yerocham, Netivot, Ofakim and Rahat. For details call 02-6461400 within Israel.