Finding refuge from Israel's storm: 'We lit Shabbat candles together'

As Israelis endure one of the worst storms to hit the country in decades, Jerusalem has gone into lockdown – and the community spirit is kicking in as visitors to the capital find themselves trapped by the very snow that they came to see.

Ilil Kopler, a 29-year-old resident of Holon, arrived in Jerusalem on Thursday evening with a friend, eager to take in the winter wonderland that the capital had become. But they have been unable to leave again, after repeated failed attempts to reach the bus that would take them back to the center of the country. It didn’t take them long to realize that the situation on the ground was very different to the one they had anticipated.

"We got stuck in the city center for ages," said Kopler, who, along with her travel companion, ultimately spent the night at the home of a Jerusalem-based friend. "There was no public transport and simply no way to get back to the center. It quickly became clear that we would be spending the night in Jerusalem, and probably the next night too."

Kopler had been expected to teach Friday at the Tel Aviv school in which she works, but had been forced to miss it. "The moment we told everyone that we were stranded, our families caught a train intending to bring us home. But they got stuck in Modi'in, and realized that a rescue was impossible."

Israel in the snow (Video: Reuters)

Kopler's host, Ofek Birenholtz, also had his plans scuppered by the weather. He had been meant to attend a lecture in Tel Aviv on Friday morning, and then go on to his parents in Haifa, but to Kopler's luck, he was home. 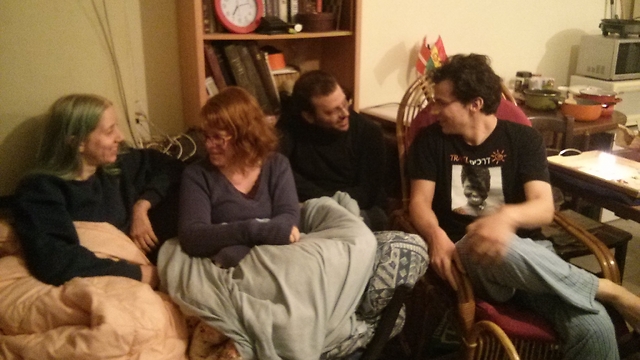 Ofek Birenholtz and his guests spend a snowy Shabbat together in Jerusalem.

"I immediately asked them to stay with me," Birenholtz said. He also offered sanctuary to a woman IDF soldier who had spent 12 hours on a bus as it slogged its way into Jerusalem. She finally abandoned the bus just past the entrance to the city and continued on foot through the snow.

"I've got nine people in my house at moment," said Birenholtz. "None of them want to be alone in such snowy weather, and some of them have no power. We had a Shabbat ceremony and lit candles to welcome the Sabbath. We are making the best of the situation."