Arab-Israeli legislator approached by man who poured scorching liquid on him at anti-Prawer protest. Tibi had previously symbolically spilled water on Prawer Bill in Knesset

During the course of the demonstration, a Jewish man in his forties approached Tibi and spilled the scorching-hot liquid on him. Tibi later reported a burning sensation in his eyes. A few months ago, MK Tibi had symbolically poured water on the Prawer plan during a discussion of the bill in the Knesset plenum.

It is not clear whether the tea spill was a direct, symbolic retaliation, but police have arrested the suspect and he will be charged with assault of a public servant. 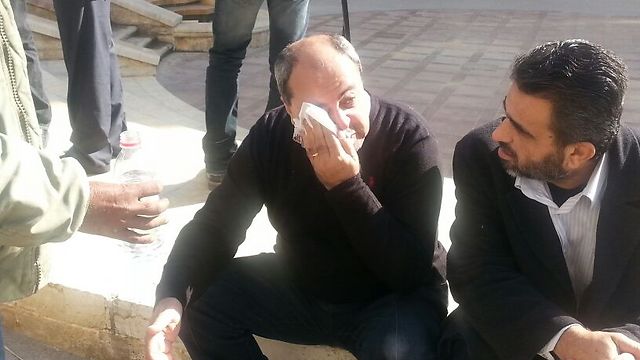 Tibi, after the attack

Knesset Speaker Yuli Edelstein commented on the event Thursday evening and told MK Tibi that "everyone has right to protest, but no one is allowed to cross the line and take justice into their own hands."

Opposition Chairman Isaac Herzog said the attack "should raise a red flag in all that's related to elected officials in Israel. Conversation in the country is turning more and more violent. Today it was hot tea, and tomorrow it could be a knife or gun."

Dozens of demonstrators – among them Arab MKs and others in the Islamist movement – took part in the protest.

After the incident, MK Tibi said: "There is not doubt that the right-wing's incitement against Arab MKs has an effect… The attack on me is the result of rising racism and inciting against Arab MKs specifically because of the Prawer affair." He added: "I don't fear death threats, spit, or hot tea, and I will continue to raise my voice in protest. It is severe that a public figure is physically attacked because of their position." 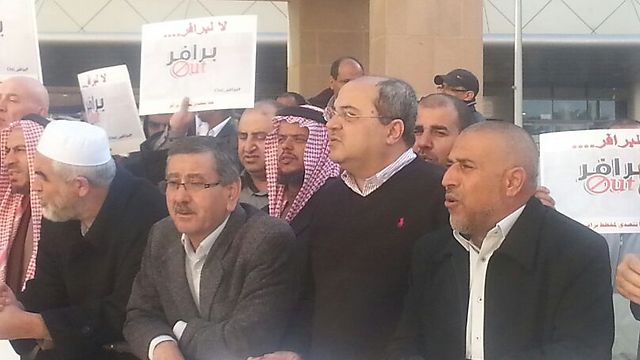 One of the protesters explained the reason for the demonstration: "We are still concerned that the Israeli government is trying to execute the Prawer plan. It is endangering our existence on our land. We won't cede easily, even if they'll kill us in our homes."

Another echoed the sentiment: "It is unfortunate that the State of Israel discriminates against her Arab citizens across the country. Instead of a government that protects us, the citizens, it abandons us. It doesn't care about the Negev residents, we are like dogs."

The demonstrator testified that the person who spilled the tea acted "in full confidence, because he knew very well that in the end he will be released and not charged with anything. The government encourages activities against Arab citizens of the State of Israel."

Last week, former Minister Benny Begin announced a halt of the Prawer plan to resettle Negev Bedouins, but the government has taken no steps regarding the matter – some deny the plan was ever even frozen.

The Prawer outline is a governmental process that will resettle the Bedouin in the Negev. The plan was formed after a slow political process, and it is meant to help solve the land ownership dispute between the State and the Bedouin population in Israel. Due to the government’s intention to pass the bill, there has been a series of riots and protests in the past weeks that both Bedouins and other social activists have started. Netanyahu initially said – after seeing the protests – that the rioters will be punished and the bill will continue as planned. “There is no, and there will not be any tolerance for those who break the law. We will continue to advance the Prawer Bill. The attempts of a violent and loud minority to prevent a better future for this large and wide-spanning population have been severe.”

The controversial plan is still under discussion.