Renowned Marine 'superstar', General John Allen, was on rise until racy email exchange shot down his career, but Obama, Kerry were not ready to give up on talent, chose him to formulate security arrangement for future peace deal. 'He is having sleepless nights, he won't let attacks happen under his watch,' says former IDF General Gadi Shamni

At the age of 59, US General John Allen was ready to take on one of the most important security roles the US has to offer. Shortly before his ascension to the role, Allen decided to serve his commander-in-chief in a different manner: He is the man meant to cause Prime Minister Benjamin Netanyahu to make history.

Allen, who is supposed to come up with the formula that will allow Israel to pass control of the West Bank, as part of the peace agreement, to Palestinian authority without endangering the State's security, landed the role as John Kerry's top security advisor.

Now, along with 160 US officials, he is leading a move reminiscent of his missions as commander of US forces in Afghanistan: Laying out a strategy for victory and for the withdrawal of forces.

Last May, a month after removing his uniform for the last time, General Allen was recruited for work in the diplomatic front. Sources in Washington discretely mentioned, as to not harm the already precarious relations with the Palestinians, that Allen has a "deep appreciation for Israel security."

An example of such appreciation is Kerry's demand that the Palestinians allow a long-term IDF presence in the Jordan Valley. The security plan had stemmed from Allen and his men's assessments and analyses of the region's security situation, following Israel's possible withdrawal from the West Bank.

Kerry and Obama hold high hopes that this man will pull of the impossible – who really is John Allen? 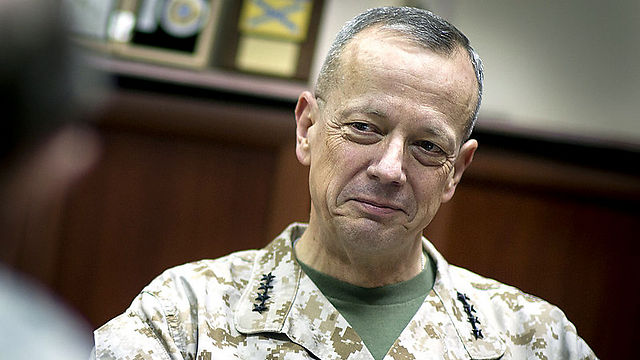 Has a "deep appreciation for Israel security". General Allen

Unlike his predecessor, General Allen has kept a low profile throughout his career, during which he was considered an admired, honest and courageous officer. With looks that could easily land him Hollywood roles as the dedicated Marine officer, Allen was already marked as a "golden boy" as early as his Naval Academy days.

When Allen resigned from the military months after a racy email exchange between himself and a Tampa socialite was uncovered, American officials decided they could not do without him; they understood that there won't be an agreement between Israelis and Palestinians if they won't give Israel a convincing solution to their security concerns after withdrawing from the West Bank.

And so, the retired General was recruited to head the "army of experts" who conducted studies of the State's security needs, as well as working with the Israeli security establishment and submitting recommendations. 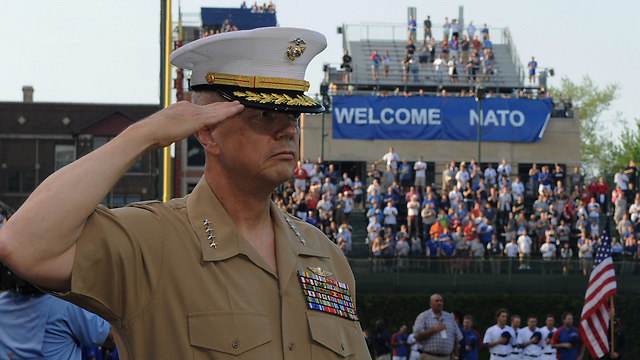 Alan's past background in Iraq and Afghanistan has trained him for his mission concerning Israel and the Palestinians.

As Deputy Commander of Central Command, he has showed his diplomatic skills by forming a relationship with the Sheikh of Anbar province in Iraq, which brought to a stop routine terror attacks on American forces stationed in the province.

In his retirement ceremony, Defense Secretary Leon Panetta praised General Allen, saying that "history, when it looks back on the Afghanistan War, will look at the role played by John Allen and see it as pivotal, in terms of the direction that changed while he was in command."

One Israeli well acquainted with John Allen is Major General Gadi Shamni, who met and befriended the general while he was serving as deputy commander of the central command.

"John Allen is a friend. I hosted him in my house. I visited his house," Shamni told Ynet. He added that they have kept in touch and that they recently had lunch together. Considering his past role as GOC Central Command and the Military Secretary of the Prime Minister, Shamni has first-hand knowledge of security issues in the West Bank.

"He is a very professional and moral officer. He has an understanding of his profession and feels a connection to us." Shamni adds that his old friend visited the State many times, even before his current appointment.

"He tours the south, the north, Gaza Strip, everywhere." He said that Allen knows Israel not only from a distant strategic perspective, but that he is well informed regarding Israel's actual field conditions.

Major General Shamni emphasizes that General Allen is "a serious, level-headed and diligent man, with a good head on his shoulders. He is unable to sleep at night."

Shamni added that he understands both the complexity of the situations and that he carries a great responsibility on his shoulders. "He understands our side, but he also understands the task assigned to him: Coming up with a formula that Israelis and Palestinians can live with.

"He won't want to see himself responsible for something that will fail, and to then have attacks happen under his watch."

The head of The Washington Institute for the Near East Policy, Robert Satloff, added to the praises, saying that General Allen is a sensitive, humane person, and that the government could not choose a better man for the job.

Although Allen is also known for his sharp sense of humor, he found nothing to laugh about when he met with Israel's security officials. The American delegation was disappointed from its first talks with Israel; the members did not feel cooperation on the part of Israel, or that they were able to obtain knowledge of details. 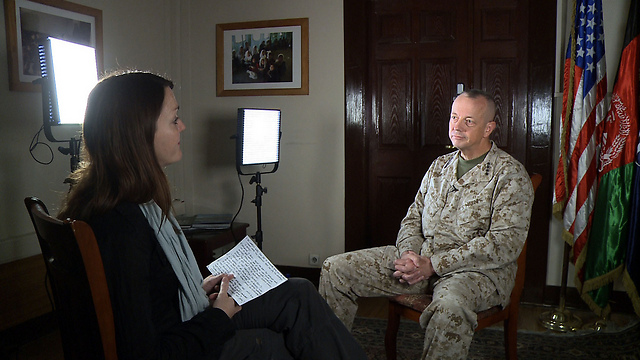 Washington knew that security is the most important thing for Israel, but the government could not say if the concern is genuine, or if it’s a security excuse used to hamper progress.

Kerry in turn insisted, pressured and threatened, and two weeks ago, the US Secretary of State came with Allen to Israel to present their security plan to both parties involved. The Palestinians complained that the American proposal includes a long-term IDF presence in the Jordan Valley after the peace-treaty would be in effect.

Shamni, who had nothing but praises for Allen, noted that despite everything, an American General lacks experience both in field operations and in attacks on Israel before and after Operation Defensive Shield, things that every officer in the sector experienced.

Shamni added that "the Americans are doing an excellent job. They are presenting what seem to be interesting alternatives that involve a lot of technology, but I am not sure that they fully understand that the technology will not provide a solution to a majority of possible scenarios."

But General Allen, designer of the security-solution plan, sounded optimistic. The man who rarely speaks in public, said in a speech in US a month and a half ago that progress can be made on the peace process in the Middle East, working towards a two-state solution.

Allen added that any kind of progress will benefit not only the region, but ultimately the United States.