Leavor and Karim. Hope to 'contribute just a little towards peace and harmony'

Bradford Reform Synagogue's future is rosier than ever thanks to intervention of local Muslim community, whose fundraising efforts have secured its long-term future

VIDEO – In March 2013, the trustees of the Reform synagogue in Bradford, England faced a difficult problem: Local media reported that the roof of the 132-year-old building in the northern city was leaking and that there was serious damage to the eastern wall where the ark held the Torah scrolls. According to The Guardian, the modest subscriptions paid annually by the temple's 45 members were not enough to cover the cost of the renovation.

In the meantime, the activity and prayers at the site were suspended, and the synagogues 87-year-old chairman, Rudi Leavor, was left with no other choice but to try to sell the historic property.

But then surprising help arrived from the synagogue's neighbors – the local Muslim community, which includes tens of thousands of members. 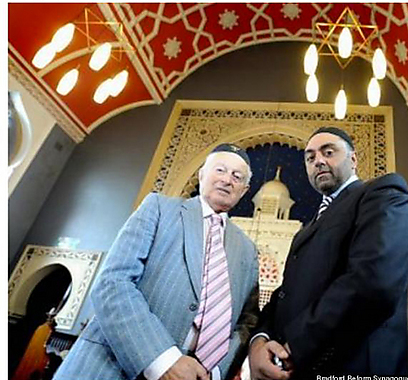 Leavor (L) and Karim in the synagogue (Photo: Huffingtonpost.co.uk)

The population in the area housing the synagogue changed significantly after many Muslims moved to the neighborhood. In an unexpected move, as defined by British media, leaders of the local mosques organized a special fundraising effort which succeeded in collecting the money required to renovate the ancient building.

According to the Guardian report, the first tranche of £103,000 (about $170,000) of lottery money will have reached the synagogue's bank account by Christmas, enabling the congregation members to start the renovation and make the beautiful building operational again.

Zulfi Karim, secretary of Bradford Council of Mosques, who led the surprising initiative, noted that since the joint effort, "Rudi is my new found big brother." He added, "It makes me proud that we can protect our neighbors and at the same time preserve an important part of Bradford's cultural heritage."
Significant Victory
Jewish-Muslim cooperation reaches Vienna
Reuters
NY Rabbi Marc Schneier receives promise from head of Austria’s Islamic community to promote Holocaust education among country’s half a million Muslims
Jewish-Muslim cooperation reaches Vienna

In an interview to the Huffington Post in March, Leavor said that his special relationship with his Muslim neighbors began when they lobbied together to stop the conversion of a local building into a restaurant, and they successfully stopped the planning application.

That is how the neighborhood's Muslim residents learned of the synagogue's grim financial situation, and it began receiving assistance from local Muslim charity organizations.

Leavor added that he had formed a close relationship with Mahmood Mohammed, who serves as a development officer for Bradford Council. "At the time, rain has entered through a faulty roof and an adjacent building, costing about £2,000 to repair most urgently. Mahmood said he had an anonymous donor who would underwrite the cost."

According to the Huffington Post, the anonymous benefactor turned out to be Kahlid Pervaiz, owner of the Drummond Mills Complex near the synagogue, who also offered its members free parking.

Bradford has had a strong Jewish community since the early 19th century, according to local daily Telegraph & Argus. The waves of refugees from Europe on the eve of World War II brought many more Jews, mainly from Denmark and Germany, who quickly found their place in the city's famous textile industry. Several decades later, the Jewish community appears to be slowly disappearing from the local landscape.

According to The Guardian, the city's only Orthodox synagogue shut its doors in November 2012, after being unable to regularly gather 10 men for the quorum required for certain religious obligations. The Reform synagogue, which had more than 150 worshippers in the past, was hit by a serious demographic crisis as well. According to Leavor, most young Jews have left Bradford for London and the population of worshippers is ageing.

Currently, a rabbi arrives at the synagogue from a different city once a month and prayer services are held on a monthly basis. Had the synagogue been shut down, the congregation would have been forced to go 16 kilometers (10 miles) to the city of Leeds to worship.

The Reform synagogue is located in a spacious Moorish building, but the cost of its maintenance became particularly challenging for the shrinking congregation.

Mahmood was responsible for introducing Leavor to Karim in the beginning of the year. "He met me at the Synagogue and was impressed with the building," Leavor told HuffPost UK.

According to Karim, "There's been a Jewish community in Bradford for 100 years, and now there's barely a trace. I was so impressed by the architecture and the history of the synagogue, we couldn't let this go to waste."

The Jewish-Muslim cooperation raised quite a few eyebrows in the city. According to The Guardian, one of the local politicians is MP David Ward, who had the Liberal Democrat whip withdrawn over disparaging remarks about "the Jews" and Israel as an "apartheid state" and was publicly supported by many of his Muslim constituents. George Galloway, an open opponent of Israel, has organized convoys to Gaza and was praised by many of his voters after refusing to engage in a debate with an Israeli student at Oxford University earlier this year.

"Many people do seem to be massively taken aback that the Jewish and Muslim community are working hand-in-hand, when all you seem to hear about Bradford are the nasty things," Karim told HuffPost UK.

"We want to make sure this synagogue is protected, long-term, a heritage site for the whole community."

Now Leavor and Karim hope that the thriving collaboration between the communities and the renovated synagogue will serve as an inspiration and a model for coexistence in other places in the kingdom and around the world despite tensions between Jews and Muslims.

If the collaboration can "contribute just a little towards peace and harmony, then so much the better," Leavor said.