Decision overturns previous top ruling giving child's aunt custody. Adopting couple: 'We were the first ones he called 'mom' and 'dad.' Judge: 'You can't tear the child away from the one family he has'

A composition of seven Supreme Court justices ruled that an Ethiopian Jewish boy will remain in the custody of his foster family.

The judges said the family could continue in its process to adopt the boy, thus overturning a previous decision of three Supreme Court justices who said he would remain with his aunt.

The child was taken from his mother's custody shortly after his birth, as she was found to be unfit to raise him. The mother was diagnosed with schizophrenia.

The child's aunt, an officer in the IDF , who also has an Ethiopian background, has been waging a legal battle to adopt him ever since. At the age of one, the child was placed in foster care. The foster family took him in with the intention of adopting him. 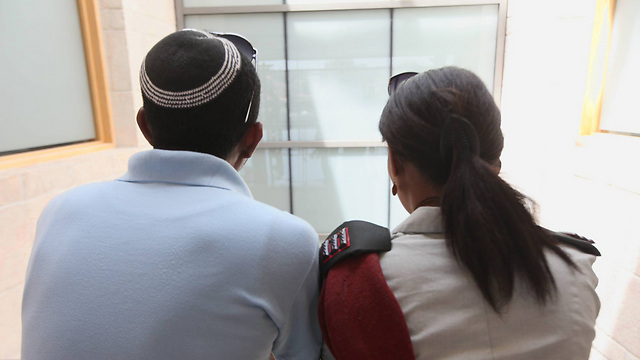 The foster family was overjoyed with the Supreme Court's decision.

"We are so excited and completely grateful that common sense has prevailed. The Supreme Court has done a great justice for our son, and it understood that his normal development will only be possible with us – his parents."

The couple said they gave him security and a warm and loving home, and through self-sacrifice and a lot of giving they changed his life.

"Slowly, but surely, he turned into a child who smiles, loves, gets excited and is completely normal just like other children."

More importantly, the couple turned into his real parents.

"We were the first ones he called 'mom' and 'dad,'" the couple said. "He essentially doesn't know anyone else except for us."

The parents said that the boy's natural environment is with them.

"This is the only home that he has ever had."

Supreme Court Vice President Judge Miriam Naor said the court tends to rule in favor of blood, giving custody to relatives. However, each case must be judged on its own merits.

"You can't turn the clock back, and tear the child away from the one family that he has had, the couple who wants to adopt him," she said.

"It's important to give significance to the likelihood that the warm treatment and loving care the child would receive from his aunt and distant family would allow him to overcome the harm he had after being separated from his mother," he wrote.

Judge Edna Arbel was quick to note that the preference for a blood connection and other family members to adopt the child is not related to the ethnic background of the child, but "for the human need to be surrounded by family and roots."

The foster couple and the boy's aunt have been engaged in a legal custody battle with the child's aunt for the past two years, during which the Social Affairs Ministry argued that it would be in the child's best interest to stay with his foster family. The government claimed that the aunt has only met the boy twice, before the age of nine months and is effectively a stranger to him.

Last month more than 100 members of the Ethiopian community demonstrated outside the Supreme Court and clashed with Border Guard forces during a hearing on the adoption case. 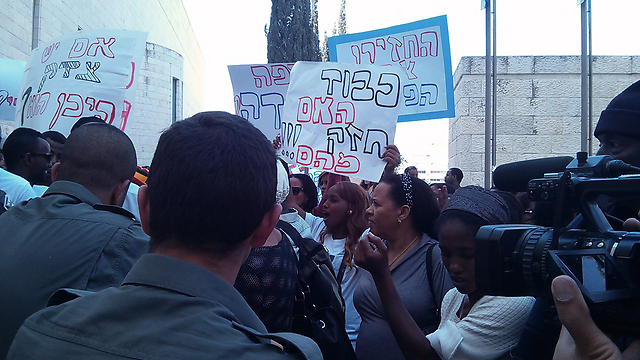 The protest outside the court last month (Photo: Shiri Fox)

"You are ruining us. That's our child. You want to buy him with money." she said "He's our flesh and blood. God didn't give you (a child) so you buy children with money. That's our child, we'll gladly raise him. He has cousins that are waiting for him."