A 41-year-old police officer working for Israel's security forces was stabbed in an apparent terror attack near the settlement of Adam. The man suffered moderate injuries after sustaining a stab wound to the back.

The doctor in charge of treating the wounded officer said the long blade nearly penetrated his heart. Police chief relayed that Palestinian suspect has evaded police, most likely fleeing to an adjacent village.

Jerusalem District Police chief, Major General Kobi Cohen, was at the scene of the stabbing in the entrance to the settlement of Adam. He said that the Palestinian suspect managed to flee to an adjacent village and the police are undertaking "major efforts" to catch him.

The police chief said that the colleague of the community policeman who was stabbed opened fire on the suspect, but apparently failed to hit him. "The distance was great, he got out his handgun and did not have time to get his rifle," said Major General Cohen.

Doctor Ofer Marin, head of the trauma unit and the deputy director of Shaare Zedek Medical Center in Jerusalem, addressed the condition of the stabbing victim: "A knife 15 cm (6 inches) in length was embedded entirely in his back. There was a lot of luck here, it was very close to his heart and other vital organs. "

The doctor added, "His condition is defined as moderate and stable. We treated him in the trauma unit and stabilized his condition. In the last few minutes he was transferred to the operating room, where we will know the exact extent of his injuries." 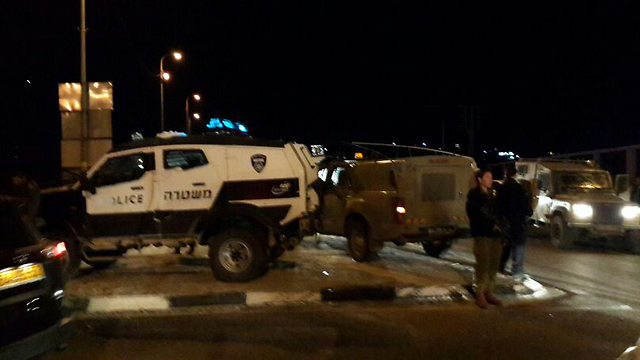 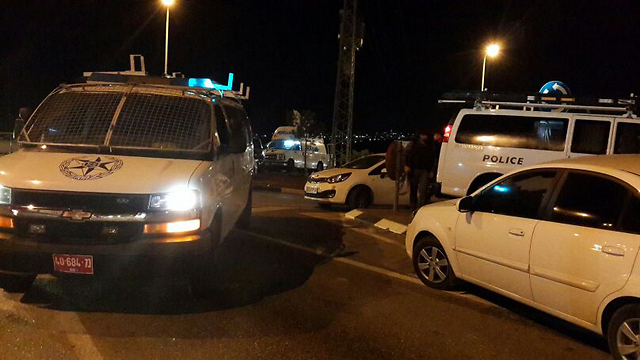 Jerusalem District Police said that shots were fired at the suspect as he fled the scene. The police added that massive security forces are currently searching the Jerusalem area for the suspect.

MDA paramedic, Hezi Tzuri, was on the scene: "When we arrived at the barrier they took us to the injured man, who was stabbed in the upper part of his body. He was fully conscious. We gave him primary field care and evacuated him."

Yigal Dilmoni, deputy director of Yesha Council, who was passing by said, "I arrived there a minute after the incident. I saw a uniformed man lying on the ground, with a cop standing over him. All of a sudden two policemen quickly blocked off the road to traffic."

The incident came only a day after a bomb exploded on a Bat Yam bus.

Luckily, one alert passenger and one cautious bus driver prevented the terror attack, pulling over to drop off the rest of passengers and calling the police who sent bomb disposal specialists.

Only a few minutes after police arrived, the bomb exploded, injuring one policeman. 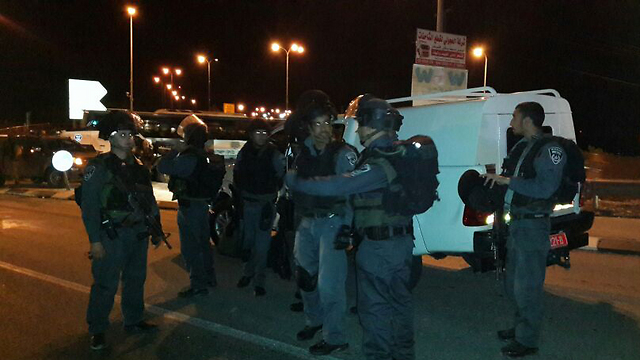 Prime Minister Benjamin Netanyahu addressed yesterday's failed terror attack on a bus in Bat Yam: "In the past few days we have witnessed a growing trend of attempted attacks. Since the beginning of the year there were 150 significant attempts, essentially one every other day."

He added, "We have managed to thwart these attacks because of our aggressive policy towards terrorist activity and the excellent work of our security forces."

Netanyahu was quoted after meeting with the two heroes of Sunday's thwarted attack – the bus driver, Michael Yoger, and passenger David Papu – whose vigilance prevented a tragedy.

"I commend you for you attentiveness. I hope you never need it again. From every event we may learn a lesson. Here we learned the importance of keeping your eyes open," Netanyahu told the two men.

This story is developing