When rhythm is a medicine

Leora Friedman is just 21 years old, but she is one of the busiest and most influential students at Princeton University: Besides all the classes she attends, she is co-founder of Music is Medicine, a non-profit organization that contributes to the field of medicine in a very unique way – not through fundraising, nor through research, but through music.

Philanthropy and music are the main ingredients of the project that was started in 2007, when Leora was 15 years old and attending high school. Born and raised in a modern-orthodox Jewish home in Baltimore, Leora and her older sister, passionate about music, decided to use that passion to help people in need, specifically hospitalized children and teenagers.

“One summer, my sister and I went to a local hospital and organized a music workshop for the patients that we called Music is Medicine,” Leora explained to me on the phone before going to class. Strongly confident about the power that music has to heal patients emotionally, she began an adventure that continues today and that brought her into the spotlight last August.

After recording an album to inspire a group of pediatric patients in her hometown, Leora fell in love with the project, and, encouraged by her relatives and friends, decided to become more committed to the cause. “Being a student and, at the same time, running the organization is tough; you need to find a balance. The most important thing is believing in yourself: sometimes you grow tired and lose confidence.”

In 2011, though, Leora experienced an epiphany that convinced her to continue growing Music is Medicine. It all started when Leora created a new project called Donate a Song, through which she contacts artists and bands, asks them to write and record a song dedicated to a child who is fighting a disease, and then all the profits from the song fund medical research for the child’s illness.

And here comes the epiphany: Leora launched her project with Brooke, a 14-year-old girl diagnosed with cancer and receiving treatment at the John Hopkins Hospital; she arranged a meeting with Brooke and Drew Seeley, who is well-known for his role in "High School Musical" tour and "Another Cinderella Story." The song that he wrote for the project is called Fly, and, when Brooke lost her fight against cancer one year later, Leora understood that her organization could make a big difference. Bringing joy to the last months of Brooke’s life and giving her strength with the music that was created for her made young Leora Friedman more determined than ever.

'God gives us the opportunity to help others'

“The fact that I am Jewish and that I grew up in a Jewish environment has had an influence on Music is Medicine for sure.” Community service, "chesed," is a very important value in the Jewish tradition, and Leora, who is very active in Princeton’s Jewish life adds, “Besides the obstacles that challenge us, God also gives us the opportunity to help others.”

Obstacles have challenged her organization, too: It’s not easy to find artists available for collaboration. “When I wanted to start Donate a Song, I spent a week looking for artists on the internet: contact information, agents, email addresses, managers… You need to be passionate and persistent. It’s hard. Once you find someone who wants to collaborate, though, it gets easier, because artists have friends who are artists, too.”

Last summer, Leora managed to collaborate with one of the most beloved artists within the YouTube users community – young singer and songwriter Sam Tsui. “Elle Winter contacted us because she wanted to perform in a hospital. It turned out that she knew Sam. Artists like him are very busy, so it took months to put all the pieces together, but at last, in July, we met in New York, and we shot the video for "Unsinkable," a song that was inspired by the struggles of Cindy, a sixteen-year-old who was diagnosed with cancer.”

And then, they received the email that changed everything. “MTV was looking for college students involved in community service for a new segment. They called me on the phone, but I was not too confident about it. Afterwards, though, they invited me to their studios in New York and they interviewed me. Then Darren Criss, the "Glee" star, arrived, and he handed me a $1,000 grant for the organization.” 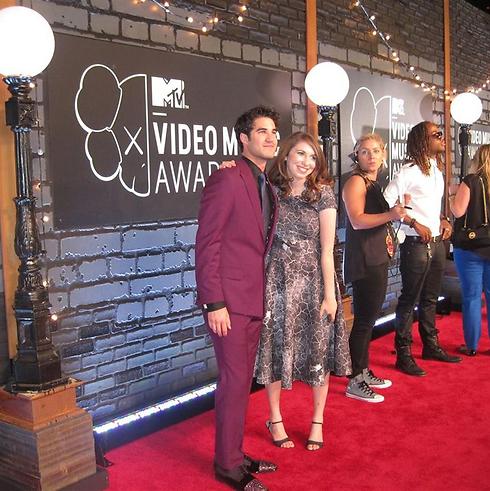 Leora’s story sounds a little bit like "Dayenu," the Passover song – she keeps on saying that every single thing that was happening would have been enough for her: The phone call, the interview, the meeting with Darren Criss. Instead, the surprises were not over; afterwards, the actor invited her to walk on the MTV Video Music Awards 2013 red carpet with him! Appearing in front of the cameras and microphones of the main television networks in the States to promote Music is Medicine was an incredible, life-changing opportunity.

Leora Friedman joined Darren Criss on the VMA red carpet, and, under the shadow of the Brooklyn Bridge, outside of the Barclays Center, she talked about Music is Medicine with several journalists. "The two days after the VMAs were crazy. I kept on receiving phone calls and emails," laughs Leora, while recalling that special experience that made her a celebrity on her university campus.

My next question, about the controversial Miley Cyrus performance, was quite unavoidable. Miley ended up on the front pages of many American newspapers the morning after the VMAs aired because of her daring attitude on stage. Leora did not want to say too much about that.

"After the red carpet, I watched the live show with my mom, and I saw Miley’s performance. All artists have a right to express themselves, as long as they won’t hurt other people in doing so. If I were that famous, I would try my best to be a role model for the younger generation, but I respect others’ choices." Then she adds that she would love to collaborate with Selena Gomez or Taylor Swift, who both have a strong teenage fan-base.

“Working for Music is Medicine has shaped my personality; it has taught me many values, like believing in my dreams, no matter how crazy they might seem,” concludes Leora, before saying goodbye and heading to class. "Everything about me, today, is due to this experience. And I am so grateful for that."