Tensions rise in light of recent Palestinian attacks on Israeli targets, dubbed 'atmosphere attacks', though seemingly neither side has interest in escalating already-volatile situation

A spate of violent Palestinian attacks on Israeli targets in recent weeks is raising concerns in Israel that it may be on the verge of a new type of Palestinian uprising.

In contrast to previous waves of Palestinian violence, the recent incidents do not appear to be an organized effort by militant groups but rather a collection of individual acts. Their rogue nature has made it difficult for Israeli leaders to respond or even identify their exact cause.

After years of relative quiet, Israel's Shin Bet security service has reported a steady rise in attacks since Israeli and Palestinian negotiators resumed peace talks in July. In November, for instance, there were 167 attacks in Jerusalem and the West Bank, compared to 136 in October, the agency said.

The past few days have been particularly dramatic. On Sunday, a pipe bomb believed to be planted by Palestinian militants exploded on a bus in central Israel in the most serious attack inside Israel in more than a year. The bus was evacuated moments before the blast, but the explosion caused heavy damage. The next day, an Israeli policeman was stabbed outside a West Bank settlement and on Tuesday an Israeli civilian was killed by a Palestinian sniper in a cross-border shooting from Gaza, sparking a series of Israeli airstrikes that killed a Palestinian girl. 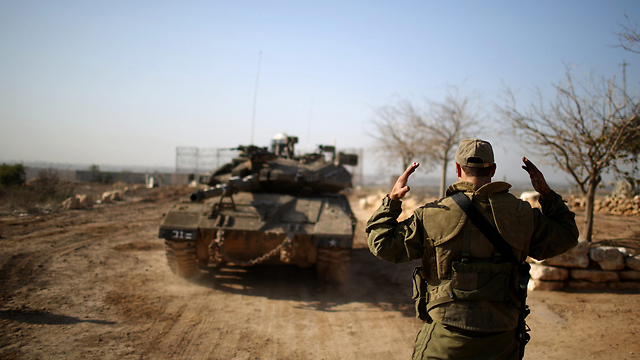 Defense Minister Moshe Ya'alon said the incidents in the West Bank and Gaza Strip - which are ruled by rival Palestinian governments - were unrelated, calling them "atmosphere attacks." But he promised that Israel would respond nonetheless.

"This is an unacceptable situation for us and despite the difficulty of dealing with an individual assailant who is incited to kill Jews, we will act with force and in other ways to harm those who try to carry out attacks," he said. The West Bank and Gaza Strip, located on opposite sides of Israel, are ruled by different governments. Israel and the West Bank-based Palestinian Authority are engaged in peace talks aimed at ending decades of conflict and establishing an independent state for Palestinians. Gaza's Islamic Hamas rulers, on the other hand, refuse to recognize Israel and call for its destruction. Both Israel and Palestinian officials agree that violence from the West Bank is connected to the peace talks, though they pin the blame on each other.

The Palestinians say the current climate is a result of brewing frustrations over the perceived lack of progress in peace talks while Israel continues to build Jewish settlements on land they claim for a future state. On Wednesday, an Israeli official said Prime Minister Benjamin Netanyahu planned to announce new settlement construction next week. 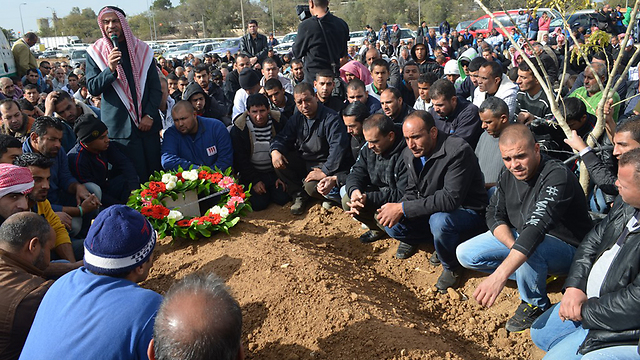 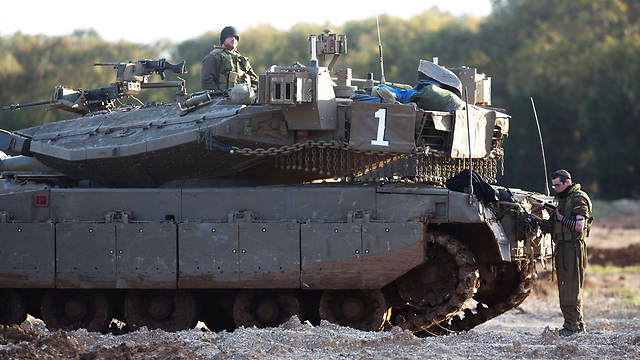 IDF on high alert near Gaza (Photo: AFP)
"Politically, there is no sign of any hope and on the economic side there is no sign too," said Jihad Harb, a Palestinian commentator. "People are frustrated by political groups who failed to bring them independence, so therefore they behave individually." Israeli leaders accuse the Palestinians of spreading hatred and incitement. "The terrorist attacks against Israelis over the last few days are a direct result of the incitement and hatred propagated in Palestinian schools and media," said Mark Regev, a spokesman for Netanyahu. "We are disappointed that so far President (Mahmoud) Abbas has not condemned these acts of terrorism as one would expect from a partner in peace talks." Israel's national police chief, Yohanan Danino, gave a slightly different explanation. He said forces have long feared that Palestinian extremists would increase their activities in order to derail peace talks. "Unfortunately, our estimation proved true," he said. Cabinet Minister Naftali Bennett said the attacks themselves were a result of the talks, which he opposes. "We only just started talking about concessions and they immediately got an appetite and they murder Israeli citizens," he told Israel's Army Radio. "When we concede, when we hand over territory, they murder us. We have to get this rule into our heads. When we stand strong, even if there are no negotiations, there is quiet." Others link the violence to the release of convicted Palestinian killers as part of the deal to resume talks. This logic goes that Palestinians are emboldened to carry out attacks knowing that they will eventually be freed from prison. A third group of prisoners is expected to be released next week. The situation in Gaza is far different. Hamas opposes the peace talks and has engaged in several rounds of heavy fighting with Israel over the years. For the past 13 months, it has observed a cease-fire with Israel. But extremist Salafist groups have carried out periodic attacks in order to undermine the cease-fire. An Israeli blockade and a tough Egyptian crackdown on Gaza's southern border in recent months have created fuel shortages and economic hardship in Gaza, creating a fertile ground for extremists. Hamas was not involved in Tuesday's sniper attack. Neither Israel nor the Palestinians seem to have any interest in escalating tensions. Either way, Israel finds itself in a position where it is trying to contain the violence and convey deterrence while not responding too fiercely. In 2000, low-level clashes quickly devolved into years of fighting that killed more than 1,000 Israelis and 3,000 Palestinians.

"We expect that (Hamas) will exert its authority on its people and on other groups," Ya'alon said Wednesday. "If it's not quiet on our side, it won't be quiet in the Gaza Strip. ...We are ready for an escalation."