A new unofficial Israeli policy not to renew special visas of African asylum seekers in Israel is raising fears they could lose their jobs and be forced to leave Israel for an uncertain future in their home countries. All of these African migrants entered Israel illegally, most of them through the porous border with Egypt, and say they could be killed if they return home.

Eritrean migrant Habton Mehari stood in a crowd of dozens of outside the Immigration office in downtown Jerusalem. On the door was a large sign in five languages from the “Voluntary Return Assistance Unit” of the Population and Immigration Authority.

In the poster, Israel offered “voluntary return assistance” for travel documents, airline tickets and a financial grant of $3500 per adult, and $1000 per child.

The financial incentives are the latest Israeli initiative to try to encourage many of the asylum seekers to leave the country. The carrot is now being accompanied by a stick – what appears to be a new policy not to renew the three-month visas that had allowed the migrants to stay in the country and even to work.

All 50 of those gathered at the Jerusalem center had been turned down for a visa renewal, meaning that once the three-month visas expire, the migrants will be in Israel illegally and could be arrested.

The Israeli government refused several requests to comment on the policy. But all tourists in Israel are given three-month visas, which they need to renew in order to stay in the country. However, if tourists overstay their visa they are rarely deported.

The Hotline for Migrant Workers, a refugee rights organization, said that Israeli immigration officials have arrested at least 100 Africans without visas since Christmas. Asylum seekers say they are afraid to leave their homes, for fear of being arrested. 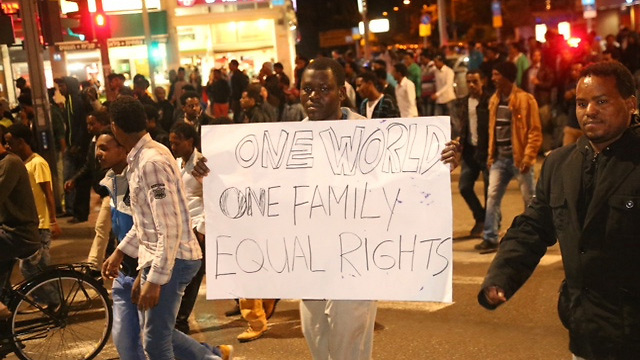 “If I don’t renew the visa, I risk being caught by the police and being taken to the Holot detention center,” Mehari told The Media Line, referring to a newly opened detention facility in the south.

“I cannot work because my employer will ask for an updated visa, and if I don’t have that nobody will hire me. I live in fear because you cannot go into the streets without a visa -- it is very dangerous.”

Mehari is one of an estimated 50,000 - 60,000 African asylum seekers living in Israel. The vast majority came from Eritrea and Sudan, most of them in the past six years. They have congregated in Tel Aviv and the southern resort city of Eilat, where they work menial jobs in construction, cleaning and restaurants.

Since Israel’s creation in 1948, it has granted refugee status to fewer than 200 asylum seekers, fearing that could open the floodgates for hundreds of thousands of others. In the past two years, Israel has built an almost impenetrable border wall and the number of asylum seekers in the past year has plummeted.

“The Israeli government on the one hand is granting them this visa to say that they are not deportable because of where they come from,” said Jean-Marc Liling, a lawyer specializing in refugee law. “But it doesn’t want to grant them a visa that would allow them to be processed and potentially recognized as refugees... The government questions the fact that they are refugees and says that they are economic migrants who came to Israel only to work and make money.”

In an attempt to address the issue, Israel opened the Holot detention center two weeks ago. As an “open” facility in the southern desert of the Negev, it allows migrants to leave the prison during the day on condition that they check in three times during daylight and return in the evening.

But only a few days after it was opened, three-quarters of its inmates had left, and 150 of them ended up in snowy Jerusalem, protesting against their treatment. After a short demonstration in front of parliament the Africans were arrested and bussed back to Holot.

In the last three years, only 3,000 Africans have left Israel, according to Israeli parliamentarian Michal Rozin from the left-wing Meretz party.

Despite the hefty sum of money Israel provides those who leave voluntarily most African migrants say it is too dangerous to return to their home countries.

“There is no place that will accept them,” Rozin told The Media Line. “The government tried to make an agreement with Uganda to take a few hundred, but it did not work out. In Europe every country will only accept a few thousand a year. We cannot send them back to Sudan and Eritrea, and the majority says that they do not have a place to go back to.”

The dangers that await the asylum seekers back home are frighening. In Eritrea, the brutal dictatorship of Isaias Afwerki rules with impunity, and ethnic civil war has engulfed both Sudan and it’s now-independent neighbor South Sudan, with over 1,000 killed in the past week alone.

“I cannot live in my country. It is very dangerous, so I came here for protection,” Mehari said of Eritrea. “There is unlimited military service. You start when you are 18 and God knows when you go home. They are detaining people, they are torturing people, and I was one of those people who were in danger of these things.”

The African asylum seekers say they want to stay in Israel until it is safe for them to go home. However since many of them cannot legally work, there has been an increase in crime rates in areas where migrants congregate. There have been several instances of rape that have angered the Israeli public. The government seems to be taking a harsher stance as time passes.

For the thousands of Africans who have no choice of return, their conditions appear to be worsening. Mehari sees no other option for him than remaining in the Holy Land.

“I can’t leave Israel. Why would I leave Israel? I cannot go home. I will be tortured, I will be killed,” Mehari said emotionally. “I would say that the state has to recognize our refugee status, and look at why these people are coming here. Rather than saying they are coming to work, they need to realize that they are running away from terrible situations.”