Hours before Israel was set to free another 26 Palestinians convicted of terrorism, the High Court of Justice refused the bereaved families' appeal against the release scheduled for midnight Monday.

Israelis opposed to the move set out from the Jerusalem residence of Prime Minister Benjamin Netanyahu on Monday evening, and marched to the Old City home of one of the prisoners set to go free.

The High Court shot down the petition filed by the Almagor organization which represented the bereaved families. In their petition, the group claimed that Netanyahu failed to make good on his promise to hold a special discussion regarding the release of Palestinian terrorists with Israeli citizenship and five such prisoners will be released Monday night.

The group requested that the court issue an interim order to hold the release until such a discussion is conducted. Justice Elyakim Rubinstein wrote the dissent opinion on the High Court's ruling, objecting to the release of five Israeli-Arabs to east Jerusalem. 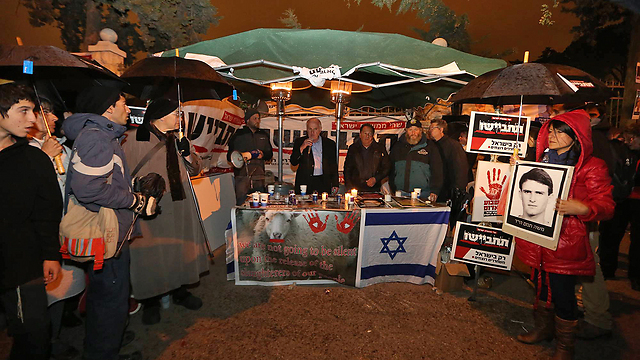 The protesters carried black umbrellas as well as pictures of the victims of the 26 prisoners, all of whom are considered to have "blood on their hands" - a reference to crimes that claimed Israeli lives. Among the marchers was Tamar Fogel, whose parents and four of her siblings were murdered in 2011 in an brutal attack at the settlement of Itamar.

This is the third of four prisoner releases that Israel committed to as a gesture of goodwill at the start of the ongoing peace talks that began in the summer. 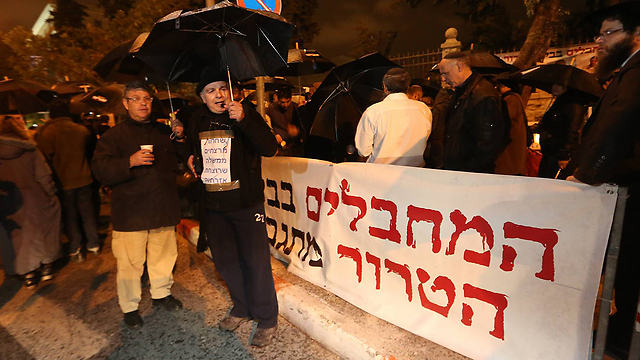 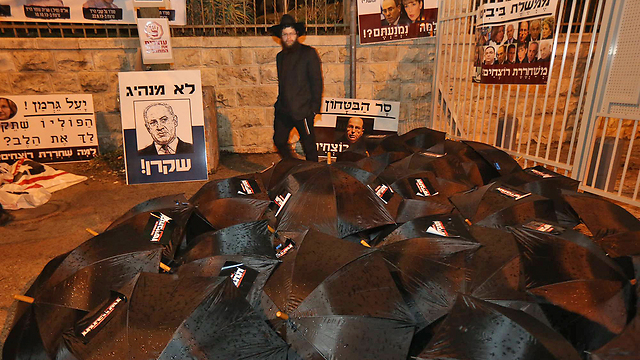 The bereaved families are marching towards the house of a prisoner scheduled to be released in the deal. Only 15 marchers will be allowed to protest in front of the house.

According to the protesters, the black umbrellas symbolize the surrender to terror and serve as a remainder of the Munich Agreement signed between Nazi Germany and British Prime Minister Neville Chamberlin. 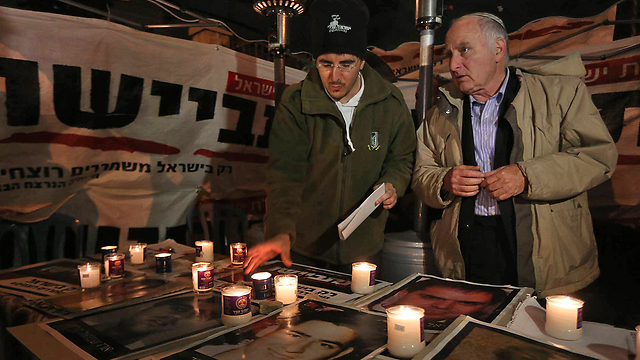 Photo: Gil Yochanan
Shimah Brucks, one of the demonstrators, told Ynet that "I have come here to say we should not surrender to heinous murderers, which take Jewish life time and time again. We are here to stop the Israeli government from releasing terrorist in return for nothing." The police and representatives of bereaved families reached an agreement at the High Court of Justice regarding the proposed path of their march to the homes of one of the prisoners being released by the government.

According to the outline, the marchers will leave the Prime Minister's Residence in Jerusalem to walk through the Old City to the Western Wall plaza, where only 15 marchers will continue towards the released prisoner's house. The discussion included barring release of 5 east Jerusalem prisoners, claiming the government has not given such authority to the cabinet.

Under a formula drawn up by US Secretary of State John Kerry, Israel agreed last summer to release a total of 104 long-serving Palestinian prisoners in order to restart peace talks with the Palestinians.

In exchange, the Palestinians dropped their longstanding demand for Israel to halt construction of homes in the West Bank and east Jerusalem. The Palestinians say they have received vague assurances that Israel would show restraint while the talks continue until an April target date for an agreement.

The latest prisoner release, expected late Monday or early Tuesday, is the third of four planned stages. All 26 of the men have been convicted in deadly attacks, and have spent between 19 and 28 years in prison. They included 18 men from the West Bank, three Gazans, and in a concession by Israel, five men from east Jerusalem.

Aviel Magnezi and the Associated Press also contributed to this report