Bill to annex productive agricultural area likely to be defeated, but divisions over next steps forward remain in Israeli society

Polls show that most Israelis are willing to give up large parts of the areas acquired in the 1967 war in exchange for a peace agreement with the Palestinians.

But when it comes to the Jordan Valley – that strip of land that marks the border between the West Bank and Jordan – a large majority of its citizens insist that Israel must at least maintain control over the area.

It has been one of the primary issues on the table between Israel and the Palestinians at talks brokered by US Secretary of State John Kerry. Reports in local media speculate that Kerry will suggest a deal in which Israel will maintain a military presence in the area for ten-years following any peace agreement. Palestinian officials have strenuously objected, saying they will not sign any pact that leaves Israeli soldiers in the area that is to become the state of Palestine.

The Israeli parliament’s Ministerial Committee on Legislation this week considered a bill to extend Israeli law to the Jordan Valley, effectively a formal annexation to Israel. The bill’s author, Miri Regev of Prime Minister Netanyahu’s Likud party and a former Israeli army spokesperson, said she was acting solely out of “diplomatic and security concerns.” “Until now, the position of all Likud governments was that under any permanent agreement with the Palestinian Authority, the communities in the Jordan Valley would be transferred to the sovereignty of the state of Israel,” Regev said.

The bill passed in committee by margin of 8 to 3, but Israeli Justice Minister Tzipi Livni, who is also in charge of negotiations with the Palestinians, had harsh criticism for the measure. 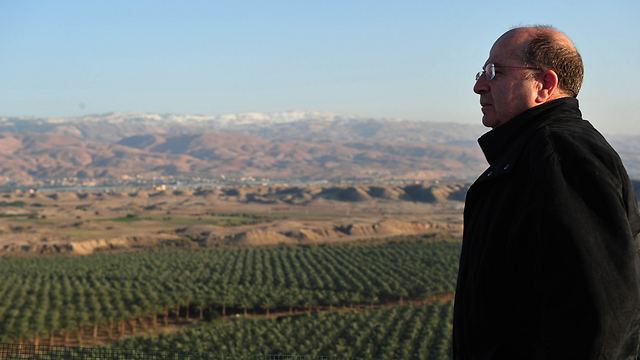 “This is an irresponsible bill and whoever supports it is irresponsible,” Livni said. “This is a bill that will hurt the state of Israel and isolate it. I have no respect for the person who proposed this bill and I have no respect for your decision, ministers, to support it. You are only supporting the bill because you know it won't pass in the Knesset (parliamentary) plenum. If you thought it would pass, you would oppose it.”

In any case, it has brought the question of the future of the Jordan Valley to the fore just as John Kerry is about to arrive for yet another round of negotiations. The area has just 6,000 Israelis living there, most of them working in agriculture. Yet those who live there say retaining the area is vital to Israel’s security.

“It’s not just important for us, it’s important for all of Israel,” David Elhaiini, the head of the Jordan Valley Regional Council told The Media Line. “Since the vote, a lot of people have been calling me in shock because they thought it was already under Israeli sovereignty. Since 1968, the Israeli government has always said it is part of Israel.”

Most of the communities in the area were built during the 1970s and ‘80s when the center-left Labor party headed the government. Elhaiini said the agricultural enterprises in the area employ thousands of local Palestinians. He also said that excluding the Palestinian city of Jericho, there are only some 2,000 Palestinians living in the area.

He says that if there is no Israeli presence in the Jordan Valley, the Israeli heartland itself is open to attacks.

“Look at what is happening in the neighborhood around us,’ he said. “If we are not there it could become a base for al-Qaeda, or Hezbollah, or Hamas.”

Some here look to the experience of the Israeli withdrawal from the Gaza Strip in 2005. The Israeli army recommended that the military maintain control of the Philadelphi corridor, the strip of land that ran between Gaza and Egypt. Then Israeli Prime Minister Ariel Sharon insisted that the withdrawal from Gaza be complete. In less than two years, the Islamist Hamas movement took over Gaza and launched thousands of rockets into Israel.

Part of the debate over security concerns the stability of the regime in Jordan. The revolutions that have swept through the Middle East have largely bypassed Jordan. Yet, there has been unrest over rising prices and some are concerned that if King Abdullah II is overthrown, Jordan could become a base for attacks on Israel.

Others argue that given the existence of long-range missiles, control over territory has become less important.

“The threat is no longer a terrorist coming to kill someone from the Jordan Valley but missiles from Iran and Iraq,” Ronnie Shaked, a Palestinian expert at Hebrew University told The Media Line. “There is no strategic importance to the Jordan Valley.”

He said the current bill under discussion is only meant to score political points.

“The Likud believes that every part of the “Land of Israel” (including all areas acquired since 1967) belong to the Jewish people, including the Jordan Valley. That’s the only motivation here.”

“Israel has shown once again that it is not interested in a two-state solution. Netanyahu’s government continues to destroy international peacemaking efforts by turning its occupation into an annexation. Denying Palestine of its only international border with Jordan is a clear step towards a permanent apartheid regime consisting of one state with two segregated systems,” he said in a statement.

Other Palestinians said Israel’s motivation is economic, not political.

“Israel is using the occupation to develop the Israeli economy,” Zahi Khoury, the chairman of Coca Cola in Israel told The Media Line. “This area should be the breadbasket of Palestine.”

Even those who support continued Israeli control over the area say that it should be an issue for negotiations, not unilateral Israeli legislation.

“We see that our region is unstable and we must maintain security control over the Jordan Valley,” David Tsur, a Knesset member from the Hatnua party and a Major-General in the Israeli police told The Media Line. “But the timing here is clearly political. This is something we should work out between us and the Palestinians.”