As a legislature that passes environmental laws, the Knesset must practice what it preaches, Speaker Yuli-Yoel Edelstein (Likud-Yisrael Beitenu) said Wednesday during the launch of the "Green Knesset" project, which will make the Israeli parliament the greenest in the world. 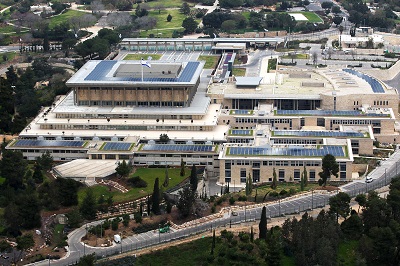 The multi-year project's goal is to convert the Knesset into a legislature that is guided in its conduct by the concept of sustainability (a multi-dimensional and interdisciplinary concept which examines our lives, as a whole, in terms of the environment, society and the economy).

Green Electricity
Ministry grants NIS 8M for green electricity facility
Ynetnews
Arrow Ecology to get government grant to build domestic, organic waste treatment facility in Hiriya landfill
Ministry grants NIS 8M for green electricity facility
Speaker Edelstein said that while the project required a significant financial investment, "it will bear fruit and return the investment," adding that the "Green Knesset" project constitutes a declaration of an "irreversible policy" led by parliament. The project will consist of numerous activities, including educating MKs and Knesset employees on the environment and encouraging them to partake in activities related to the environment; publishing position papers on the issue; launching projects that will make the Knesset a more sustainable place; and making the everyday operational activities in the Knesset more sustainable as well. Environmental Protection Minister Amir Peretz (Hatnua) said during the event: "At a time when my office is leading an environmental revolution in industry and in the residents' homes, the symbol of the country must become a leading element in the green revolution, because it is the Knesset's duty to protect the next generations, and protecting the environment is the way to do it. Those who want to think far must think green."

Wednesday's event marked the beginning of the first phase of the project, which will be implemented throughout 2014 and 2015. This phase will be characterized mainly by 13 ventures focusing on energy and water. Among other things, this phase will include the construction of a 4,500 square meter solar field for the production of electricity from renewable energy; replacing hundreds of bulbs with LED bulbs; replacing the air-conditioning systems with an energy center; automatically shutting down all of the computers at the end of the workday; measuring the amount of water used for irrigation in the Knesset and adopting a more economical water consumption model; the desalination of water from the Knesset's air-conditioning systems and using this water for irrigation and other purposes. 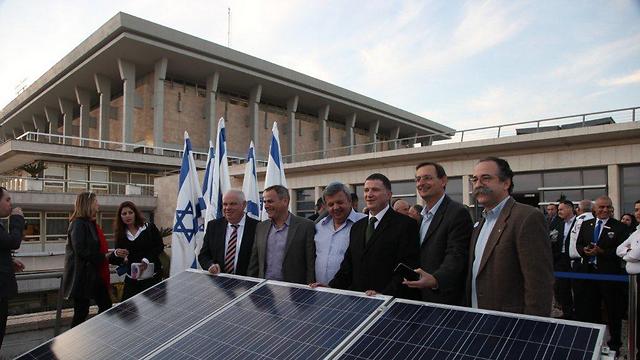 Moreover, the saving of energy will reduce the level of carbon emissions from the Knesset and thus make the Knesset's ecological footprint smaller.

Some NIS 7 million ($2 million) will be invested in these initiatives, and the average return from saving energy and water is estimated at NIS 1.5 million ($430,000) a year, on average, after about five years. This sum will be transferred to the "Green Fund," which will be designated for the continuation of the "Green Knesset" project (meaning the expansion into additional initiatives), as well as for the benefit of the employees, as is customary around the world. All of the approved projects have been found to be economically feasible. National Infrastructure, Energy, and Water Minister Silvan Shalom (Likud-Yisrael Beitenu) said the "Green Knesset" project will be a source of pride for Israel and will inspire other countries. "This is a blessed move of great importance. Encouraging energetic efficiency, the saving of electricity and advancing the use of natural gas and renewable energy will reduce pollution, preserve the environment and save a lot of money," he said, adding that the project's principles and goals directly coincide with the values and projects being promoted by his office. Naor Yerushalmi, director of Life and Environment, the umbrella organization for the environmental movement in Israel, said during the event that the environmental groups "welcome the Knesset's leadership in the sustainability field." By adopting environmentally conscious practices, Yerushalmi said, parliament "is showing that it is responsive to the concerns of the public and is setting a great example for public institutions and millions of citizens." Along with the implementation of the initial phase of "Green Knesset," the task force in charge of the project continues to work on a multi-year work plan, which will be implemented during the second phase of the initiative. Among other things, the task force will discuss the Knesset's geographical surroundings, including the planning of a park based on the principles of sustainability, which will include a communal garden – in cooperation with the Jewish National Fund and the Society for the Protection of Nature in Israel. The plan will also be aimed at encouraging the use of public transportation and turning the Knesset into a building that educates on the environment. It should be noted that the Knesset has already adopted some environmentally conscious practices: Knesset employees recycle paper and bottles and try as much as possible to avoid printing out documents. When they do, they use the duplex printing feature. Moreover, the Knesset's director general began to encourage employees to save electricity as soon as he assumed his duties.