Ariel Sharon dies at 85, eight years after stroke that felled him

Former prime minister and combat soldier will be remembered for his exploits in Israel's wars, the decision to leave Gaza, an infamous trip to the Temple Mount at the start of the second intifada - and the massacre at Sabra and Shatila in Lebanon

Ariel Sharon, the controversial prime minister often blamed for lighting the touchpaper of the second intifada in 2000, and who led Israel out of the Gaza Strip in 2005, has died at the age of 85. He had spent eight years in a coma following a massive stroke in January 2006.

A dominant yet divisive figure in Israel, both as a military and political leader, Sharon died on Saturday afternoon at the Sheba Medical Center at Tel Hashomer, where he had been receiving long-term care.

His son Gilad Sharon announced: "He has gone. He went when he decided to go."

A lifelong soldier, Sharon had turned to politics immediately after ending his service in the Israel Defense Forces at the age of 45. He had fought in the nation's conflicts from before the inception of the state in 1948 up to and including the 1973 Yom Kippur War. He retired from the military with the rank of major general, and entered the Knesset. His political career flourished, albeit, like his military life, not without some controversy.

Sharon served as defense minister from 1981 to 1983, and prime minister from 2001 to 2006. It was while he held highest of political posts that he suffered the stroke that would leave him in a coma. 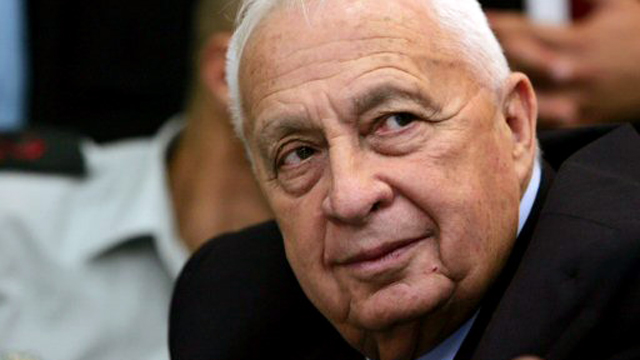 Ariel Sharon at a Knesset meeting in 2005 (Photo: Reuters)

Ariel Sharon was born in Kfar Malal on March 1, 1928 to parents Deborah and Samuel Sheinerman, who arrived in Israel in the Third Aliyah from Russia, after the First World War.

Throughout the years, Sharon's personal life bore much turmoil and drama. His first wife Margalit was killed in a car accident in 1962. Their son, Gur, was killed in 1967 at the age of 11 after a bullet discharged from a rifle Sharon used as decoration in his home.

One year following Margalit's death, Sharon married her sister, Lily. The two had two sons, Omri and Gilad. Lily passed away from lung cancer in March 2000, and asked to be buried on a hill overlooking their famous Sycamore Ranch.

In 1942, he joined the Haganah, the pre-state militia that evolved into the IDF, and thus began a long career in the military. During the 1948 War of Independence, at the age of 20, he was a platoon commander in the Alexandroni Brigade and was seriously injured in the battle of Latrun. Upon his recovery, he became a battalion intelligence officer.

In 1951, Sharon was appointed chief intelligence officer for the Central Command, and in 1952 served in the same role in the Northern Command. He then took study leave, working for a bachelor's degree in history and Middle Eastern studies at the Hebrew University in Jerusalem.

In 1953, he was an instrumental figure in the creation of Unit 101, whose purpose was to carry out retribution operations in response to infiltration attacks (Palestinian fedayeen) from Jordan and the Gaza Strip. Under his command, Unit 101 carried out several successful retaliation operations; however in October 1953, a retribution action in the village of Qibya in the West Bank resulted in 69 Arab casualties.

Following the "Qibya massacre", the decision was made in January 1954 to end the unit's independent operations, and it merged into a paratrooper battalion, under the Sharon's command. In 1956, he was appointed commander of the Paratroopers Brigade, and fought in the Suez Crisis (Operation Kadesh) the same year.

From 1958 to 1962, Sharon studied law at the Hebrew University, and commanded the Infantry Brigade and the army's infantry school. With the appointment of Yitzhak Rabin as the IDF chief of staff in 1964, Sharon was named Chief Staff Officer in the Northern Command, and two years later he was appointed head of training within the IDF General Staff, a role that awarded him the rank of major general. 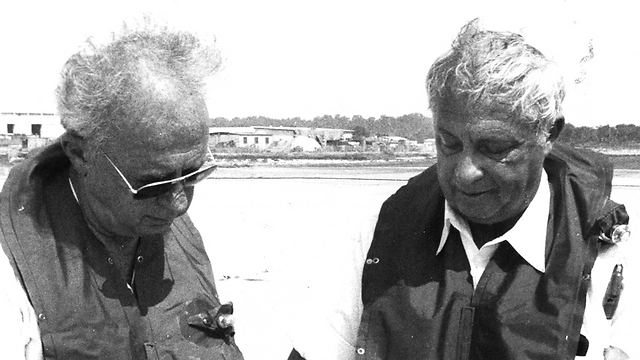 He took part in the Six-Day War as an Armored Division commander, winning high praise. In 1970 he was appointed as head of the Southern Command. He primarily took command of the War of Attrition, while fiercely criticizing the policies of then-IDF Chief of Staff Haim Bar-Lev and quarrelling with his General Staff colleagues. At the end of the War of Attrition and in 1971 he planned several attacks on terrorist cells in the Gaza Strip. In addition, he evacuated the Bedouins from northern Sinai, an act for which he was reprimanded by the then-chief of staff.

Sharon retired from the IDF in June 1973, and turned his attention to the Liberal party and the Knesset elections. He spent the next several months working with Menachem Begin on establishing the Likud, an amalgam of several existing rightist and liberal political parties. When the Yom Kippur War broke out in October 1973, Sharon returned to active duty as an Armored Division commander, quarreled with his superiors, and crossed the Suez Canal in what would become the war’s turning point.

Sharon became a Knesset Member in the general elections of December 1973, but resigned a year to return to the IDF. From 1975-1976, he served as defense advisor to Rabin, who was by then prime minister.

In 1980, Defense Minister Ezer Weizmann resigned, and Sharon sought to replace him. But Prime Minister Menachem Begin refused his request, and tensions arose between the two. It was only after the elections for the tenth Knesset in 1981 that Sharon was named defense minister. In this role, Sharon initiated Operation Oranim (Pines), which aimed to eliminate terrorist bases in Lebanon, and put an end to the ongoing attacks across the northern border.

The major operation, dubbed Peace for Galilee, began on June 6, 1982. Sharon was involved in all its stages, and critics charged that he had taken several steps without Prime Minister Begin's knowledge or approval. In September 1982, after the assassination of Lebanese President Bachir Gemayel, the Lebanese Phalange forces massacred thousands of Palestinian residents of the Sabra and Shatila refugee camps of Beirut, an act that would haunt Sharon – and Israel – for years to come. The Israeli Kahan commission of inquiry found that Sharon bore personal responsibility for the massacre, and he was forced to resign as defense minister.

Despite this, Sharon continued to serve in the government as minister without portfolio, and was appointed industry and trade minister in the unity government formed after the 1984 elections, despite the opposition of HaMa'arakh (alignment) party members. 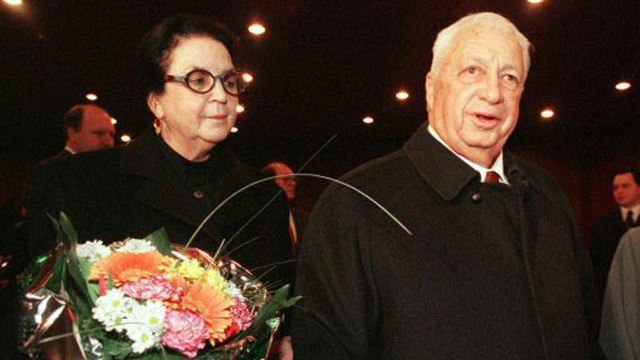 In February 1990 he resigned due to the government's decision to allow elections in the Palestinian territories. After the fall of the government on March 15, Sharon was appointed minister of housing and construction under Yitzhak Shamir. In this position he accelerated large-scale settlement construction in the territories.

Ahead of the 1992 elections, Sharon ran for Likud leadership, yet came in third after Yitzhak Shamir and David Levy. Following Likud's defeat by Labor in the 1992 elections, Shamir retired from political life. In the internal Likud elections in February 1993, Sharon chose not to run against Benjamin Netanyahu, who went on to lead the party to victory in 1996.

Sharon was initially left out of the new Netanyahu government, but was given the ministry of national infrastructure following an ultimatum presented by David Levy. He was member of the security cabinet, and towards the end of the government served as its foreign minister.

Following his overwhelming defeat in the 1999 elections, Netanyahu resigned the Likud leadership, and Sharon was elected as his successor in September 1999.

In September 2000, Sharon visited the Temple Mount, a controversial visit that received much media attention, despite warnings regarding the possible consequences of such an act. Following the visit, a wave of violence erupted among Palestinians in the West Bank and Gaza Strip, as well as among Israeli Arab citizens. This wave of violence marked the start of the Al-Aqsa Intifada.

In the 2001 elections, Sharon ran against Ehud Barak in a special election for prime minister, and won by a landslide. In January 2003 he led the Likud to a decisive win in the Knesset elections.

Sharon inherited the prime minister's chair with the second intifada in full swing, and Israel facing numerous terrorist attacks. Under Sharon, the country took major steps against the continuous assaults, including a prolonged military attack against terrorist organizations. Military action peaked in late March 2002, with Defensive Shield, a major operation involving conscripted and reserve soldiers triggered by a massive suicide bombing at the Park Hotel in Netanya on the first night of Passover days earlier, in which 30 people were killed.

In December 18, 2003, Sharon began to promote his plan for unilateral Israeli disengagement from the Gaza Strip. The full details of the plan were presented in April 2004, when Sharon announced he intended to execute a full separation from Gaza, which would include the evacuation of all Israeli communities in the Strip, along with four settlements in northern Samaria.

Within the next few months, Sharon managed, albeit with great difficulty, to maintain the stability of his government and implement his disengagement plan: In August 2005, all Israeli settlements in Gaza were evacuated, along with the four settlements in the northern West Bank. 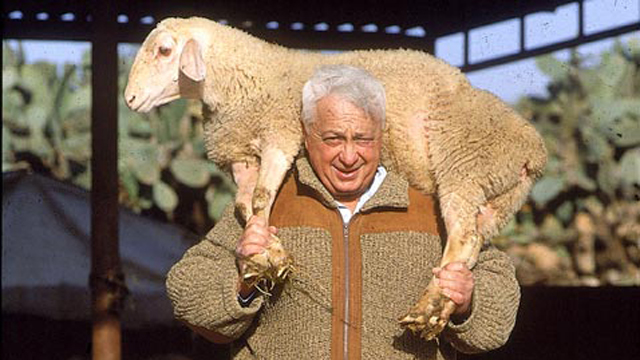 Ariel Sharon at his beloved Sycamore Ranch in the Negev (Photo: Yossi Rot)

The disengagement led to a severe internal crisis within the Likud. In November 2005, after the resignation of the Labor party from Sharon's government and the agreement on early Knesset elections, Sharon announced his departure from the Likud and - the establishment of a new party, Kadima.

It was during what would prove to be a short-lived term as head of a Kadima government that Sharon suffered from two strokes, the second of which would leave him comatose. The first, in December 2005, was a mild stroke, and he was hospitalized for just two days. But on January 4, 2006, the prime minister suffered a massive cerebral hemorrhage. Ehud Olmert, who served as Sharon's deputy prime minister, became acting prime minister.

Sharon never regained consciousness. He is survived by his two sons, Omri and Gilad, and several grandchildren.