More than 100 US universities combat ASA's decision to boycott Israel

List of schools against organization's decision to isolate Jewish country's academic institutions continues to rise. Other colleges expected to tag along when offices reopen after winter holiday

Over a hundred US universities have openly rejected the American Studies Association decision to academically boycott Israel.

The list of schools includes Ivy League universities, such as Columbia, Princeton, and Harvard, as well as other top institutions such as Stanford. More universities are expected to tag along as administration returns after the holiday break. 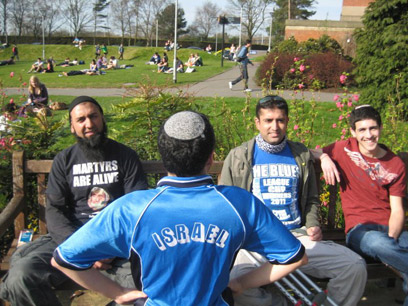 The prestigious Modern Language Association is also expected to vote on the boycott in its convention next week.

"We hope the clear messages issued by the presidents of the most prestigious universities in America against the boycott of Israeli institutions or academics will resonate with any who are contemplating a similar effort at the MLA,” said Conference of Presidents of Major American Jewish Organizations leaders, Robert G. Sugarman, chairman, and Malcolm Hoenlein, executive vice chairman.

Four universities have already revoked their membership from the ASA due to the boycott. Another 11 flatly denied being institutional members of the ASA, though the organization lists them as such.

Last week, Two-thirds of the 1,252 members of the American Studies Association who voted approved a boycott resolution, which stems from a broader campaign to isolate Israel that has made little headway in the United States but has gained some traction in Europe.

"The resolution is in solidarity with scholars and students deprived of their academic freedom and it aspires to enlarge that freedom for all, including Palestinians," the association said in a statement.

It cited "Israel's violation of international law and UN resolutions; the documented impact of the Israeli occupation on Palestinian scholars and students; (and) the extent to which Israeli institutions of higher education are a party to state policies that violate human rights."

The American Studies Association's resolution urges US schools not to collaborate with Israeli institutions. But it carries broad exemptions for individual Israeli scholars working with American counterparts – as long as said scholars declare they are not representing Israeli universities of the Israeli government.