It was cleared for publication on Thursday that the Shin Bet, in collaboration with the IDF and police, arrested 14 men for involvement in the blast on a bus in Bat Yam last week.

Four of the suspects are senior Islamic Jihad operatives, one of whom in Palestinian police training, residents of Bethlehem. 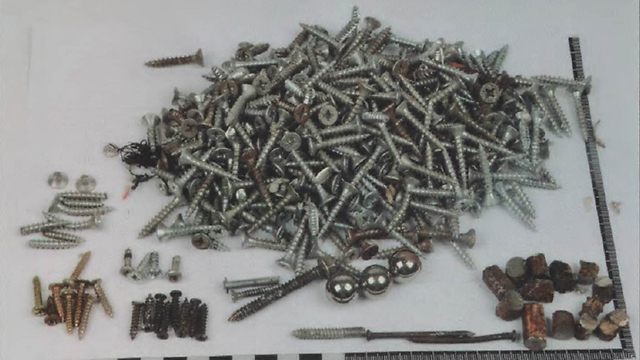 The shrapnel inside the bomb

Ten other suspects arrested for involvement in the attack include Negev Bedouins. 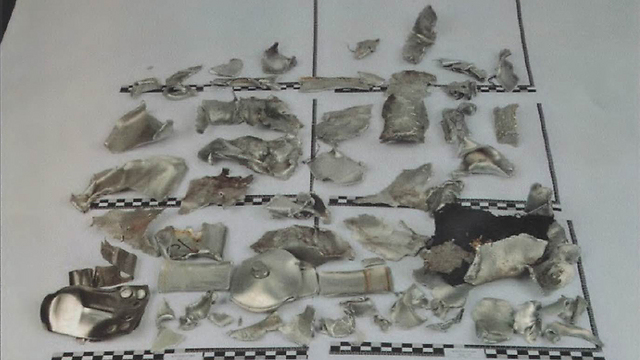 Metal pieces packed inside the bomb

The security forces arrested Sahada Taamri, 24, Hamadi Taamri, 21, Sami Harimi, 20, and Yosef Salamah, 22. The other 10 suspects were involved in the minor details of the plan.

The Shin Bet's investigation revealed that during the last several months the group decided to execute a massive terror attack in Israel. The explosive was prepared by the Taamri brothers and Salamah, who used two kilograms of improvised detonation material, nails and screws, and had a switch attached to a cellphone to activate the bomb remotely. 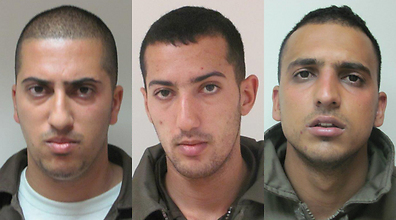 Harimi was given the bomb, hidden in a black bag, which he took with him on December 22 to the southern Hebron Hills, where he went with other illegal aliens to infiltrate into Israel. Harimi then got into the car of a Bedouin man, an Israeli citizen who helps Palestinians illegally residing in Israel, and the two drove to Jaffa.

After praying in a Jaffa mosque, Harimi got on bus no. 240, laid the bomb, got off a few minutes later, and then called the cellphone that was attached to the bomb, thus triggering the explosion. The bomb was placed in a pressure cooker, similar to the bomb in last year's Boston Marathon. 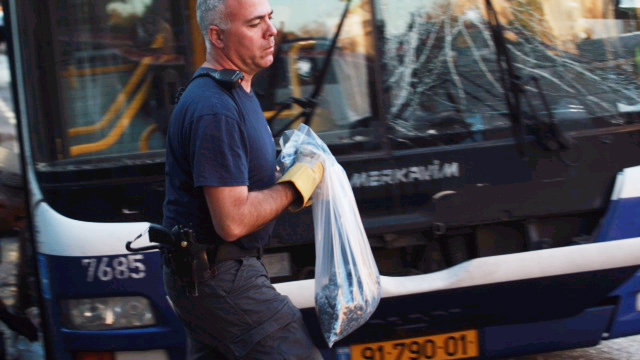 The damaged bus in the Bat Yam explosion (Photo: Motti Kimchi)
Harimi was arrested several days later in Bethlehem, admitting his part in the attack, and said that the group of terrorists wanted to execute a larger attack in Tel Aviv a few days after the Bat Yam explosion, but their arrests hindered their plans. Commanding officer of the Judea and Samaria Brigade, Brig. Gen. Tamir Yadi, told Ynet that "over the past few days we were after that cell of four operatives, including the one who planted the explosive device." "I'm upset and scared that we didn’t know about the cell, but it is possible that with hundreds of cells planning attacks there is one that we didn't about it," he said.

One of the Taamri brothers led the security forces to a cache of explosives near his house.

Upon entering the structure where the explosive was assembled, Israeli forces "found 25kg of explosives meant for further attacks," according to the IDF official. "This group is knowledgeable on preparing explosive devices."

According to the official, security forces were familiar with several of the suspects.

Reportedly, The Taamri brothers had already been in prison in Israel, Sahada was in training to become an officer with Palestinian police, and Harimi worked at a restaurant in Jaffa, even though he had no work permit. 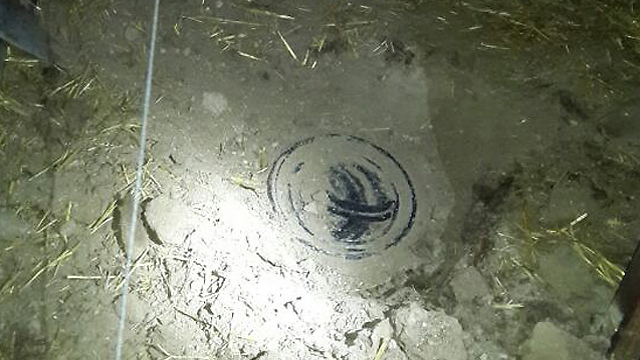 The explosives cache
Security forces noted that the Bedouin who drove the perpetrator may had done so innocently and was not aware of his passenger's terror plans. Prime Minister Benjamin Netanyahu commended the Shin Bet, IDF, and police forces for "a timely capturing of a terror cell that laid an explosive device on Bat Yam bus."

Netanyahu addressed the fact that one of the suspects was in officer training with the Palestinian police noting that "this is further proof of Palestinian Authority personnel's direct involvement with terror. It's time that Abu Mazen stops celebrating with released murderers and lead his people into the way of peace."

Despite the attempted terror attack, the IDF official said that there is no clear indication that there is a security escalation and that "We can't ignore the successive events in Judea and Samaria during the past two years, but there is no specific alertness of terror in the Israeli home front." Security forces said that the Islamic Jihad terror cell in Area A worked out of Bethlehem, and that it was relatively new. The two Taamri brothers built the device together, and Harimi was the one who knew the best ways to sneak into Israeli territory.

Two hours after the bomb exploded last week the Shin Bet had already detained some of the suspects.

Ynet analyst Ron Ben-Yishai said that the use of the pressure cooker was used to intensify the blast, and that this was the first time the Palestinians used a pressure cooker.

One of the workers in the Jaffa restaurant where Harimi is supposed to have been working said he knows all the workers there, and that Harimi didn't work there.

A policeman was lightly injured in the blast in the city of Bat Yam in Israel's center last week.